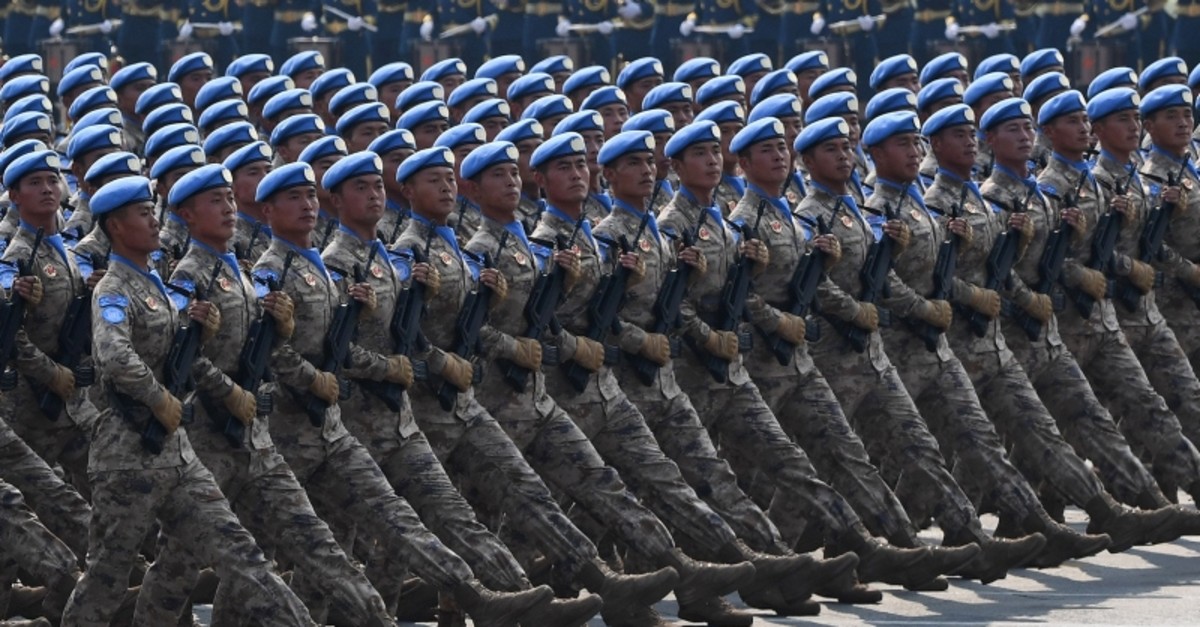 Chinese People's Liberation Army personnel participate in a military parade at Tiananmen Square in Beijing on October 1, 2019, to mark the 70th anniversary of the founding of the Peopleu2019s Republic of China. (AFP Photo)
by Associated Press Oct 01, 2019 11:43 am

Trucks carrying weapons including a nuclear missile designed to evade U.S. defenses rumbled through Beijing on Tuesday as the Communist Party celebrated its 70th anniversary in power with a military parade that showcased its emergence as an increasingly ambitious global power.

The military showed off China's most advanced weapons, some being shown for the first time, as rows of soldiers marched in lockstep past President Xi Jinping and other leaders in Tiananmen Square, the country's symbolic political heart. Thousands of spectators waved Chinese flags and fighter jets flew low overhead.

"No force can shake the status of our great motherland, and no force can stop the progress of the Chinese people and the Chinese nation," Xi, wearing a gray Mao jacket, said in a nationally televised speech.

As he spoke, anti-government protesters in Hong Kong gathered for the latest in a series of demonstrations that have challenged Beijing ahead of this year's highest-profile political event. The largest group took over a broad thoroughfare in central Hong Kong and chanted slogans against the Communist Party.

Hong Kong Chief Executive Carrie Lam attended the Beijing parade, accompanied by dozens of Hong Kong officials and dignitaries in a show of unity with the ruling party.

Xi was joined on the Tiananmen rostrum by Premier Li Keqiang, former Presidents Hu Jintao and Jiang Zemin and other leaders.

The event commemorates the anniversary of the Oct. 1, 1949, founding of the People's Republic of China by then-leader Mao Zedong following a civil war. Invoking Mao's memory, Xi made his speech Tuesday on the same spot as the former leader's 1949 declaration.

Xi rode in an open-topped limousine past dozens of rows of truck-mounted missiles, armored personnel carriers and other military gear.

A formation of fighter jets trailing colored smoke and led by a plane with a radar dish flew low over the capital as Xi waved to the pilots from the ground.

The event highlighted rapidly developing Chinese weapons technology, paid for by a three-decade old economic boom that supported a 400% increase in military spending over the past decade. Foreign analysts say it is close to matching the United States, Russia and Europe in missiles, drones and some other fields.

The People's Liberation Army, the world's biggest military with 2 million men and women in uniform, also is working on fighter planes, the first Chinese-built aircraft carrier and a new generation of nuclear-powered submarines.

"Although China has made great improvements in its military equipment, China should not relax vigilance and needs to continue to make efforts," Yue said.

One closely-watched weapon unveiled Tuesday was the Dongfeng-17, a glider capable of carrying a nuclear warhead. Foreign analysts say is designed to maneuver at high speed to evade anti-missile defenses.

Another missile displayed, the Dongfeng-41, is believed to have a range of up to 15,000 kilometers (9,400 miles), which would make it world's longest-range military missile. Analysts say it may be able to carry as many as 10 warheads to hit separate targets.

The party's emphasis on missiles and other long-range weapons reflects Beijing's desire to displace the United States as the region's dominant force and enforce claims to Taiwan, the South China Sea and other disputed territories.

The PLA had the world's second-highest military spending at an estimated $250 billion last year, according to the Stockholm International Peace Research Institute. The United States, with a force of 1.3 million people, led in spending at $650 billion, or more than 2½ times China's level.

China has about 280 nuclear warheads, compared with 6,450 for the United States and 6,850 for Russia, according to SIPRI. Beijing says it wants a "minimum credible nuclear deterrent" but won't be the first to use atomic weapons in a conflict.

China can "reach potential adversaries across the globe," the U.S. Defense Intelligence Agency said in a report in January.

Tuesday's celebration comes as Xi's government faces economic and political challenges, but the ruling party's hold on power appears to be secure three decades after it crushed pro-democracy protests centered on Tiananmen Square.

Beijing is trying to shore up cooling economic growth and prevent politically dangerous job losses amid a tariff war with Washington over trade and technology, a dispute that has battered Chinese exporters.

Xi promised in a speech Monday to stick to official commitments to let Hong Kong manage its own affairs despite the unrest in the territory.

Paramilitary policy maintained a strong presence Tuesday in Shenzhen, the mainland city that abuts Hong Kong. Dozens of armored personnel carriers and other vehicles of the People's Armed Police were parked outside a stadium as authorities prepared for an evening fireworks display.

Also Tuesday, North Korean leader Kim Jong Un praised his country's decades-long ties with Beijing in a congratulatory message to Xi and said Pyongyang would stand by China in "defending and glorifying socialism," according to the North's official news agency. The two leaders have met five times amid pressure on Pyongyang to renounced nuclear weapons development.

Xi, the son of a commander in Mao's guerrilla army, has emerged as China's most powerful leader in decades after using a marathon anti-corruption drive to neutralize potential rivals.

In his speech Monday, Xi reminded Taiwan, the self-ruled island Beijing claims as its own territory, of the ruling party's pledge to unite it with the mainland, by force if necessary.

Beijing is using China's status as the world's second-biggest economy as leverage to isolate Taiwan politically. China has pressured foreign retailers, airlines and other companies to identify the island and the mainland as one country on their websites. In its latest diplomatic coup, Beijing persuaded the Solomon Islands last month to break diplomatic ties with Taiwan.

Taiwan's unification with the mainland is "an inevitable trend" and " no force can ever stop it," Xi said.