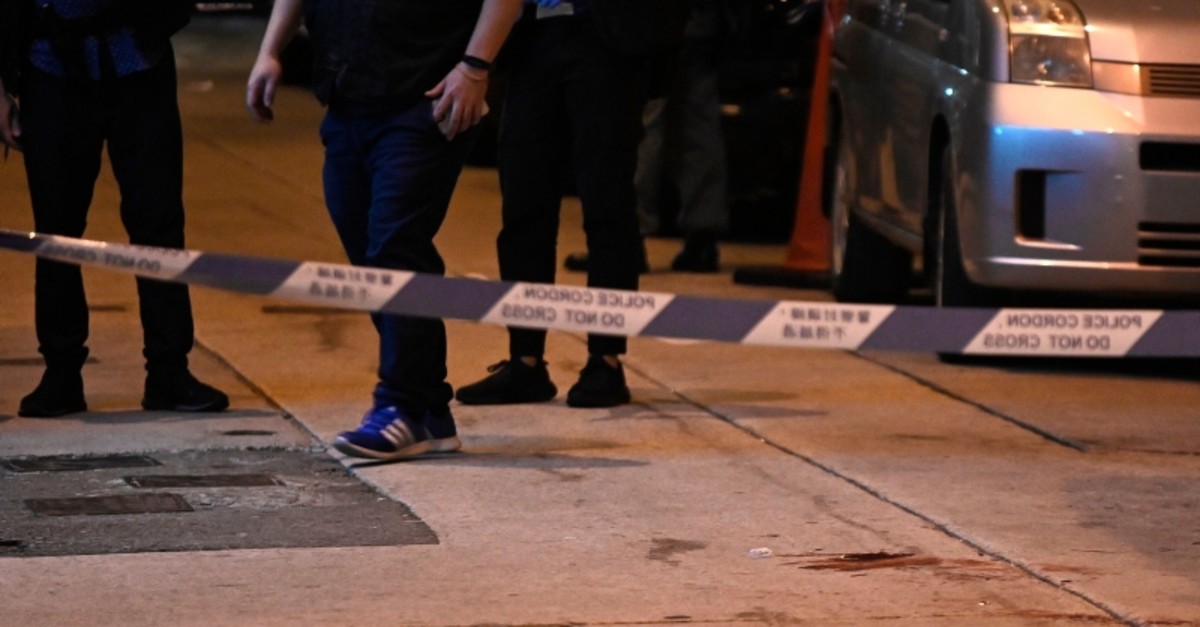 Blood is seen beyond a police cordon, where Jimmy Sham, convener of the Civil Human Rights Front (CHRF), was assaulted by four to five people wielding hammers in the Mongkok district of Kowloon in Hong Kong on October 16, 2019. (AFP Photo)
by Oct 17, 2019 11:53 am

Rights group Amnesty International has called on Hong Kong authorities to urgently investigate a violent attack on the leader of one of the biggest pro-democracy groups in the Chinese-ruled city, ahead of a march planned for the weekend.

It was the second such attack on Jimmy Sham, head of the Civil Human Rights Front, since protests escalated in the Asian financial hub in mid-June and which, photographs on social media showed, left him in a pool of blood on the street.

"The authorities must promptly conduct an investigation into this horrifying attack...send a clear message that targeting activists will have consequences," said Joshua Rosenzweig, head of Amnesty’s East Asia regional office.

"Anything less would send a chilling signal that such attacks are tolerated by the authorities," he said in a statement on Wednesday.

As many as five masked men wearing black and believed to be of non-Chinese origin had attacked Sham with hammers and knives for more than 10 seconds in the gritty Mong Kok district on the Kowloon peninsula, police said late on Wednesday.

Police condemned what they called a planned attack and vowed to investigate. Sham was in stable condition, a government spokesman said.

His group, which organized the million-strong marches in June, plans a march on Sunday in the neighboring district of Kowloon, but authorities have not yet confirmed it will be permitted.

"It is not hard to link this incident to a spreading political terror in order to threaten and inhibit the legitimate exercise of natural and legal rights," the group said in a statement.

Speaking at the city's legislature on Thursday, nearly a dozen pro-democracy lawmakers condemned the attack on Sham and said they would continue to protest.

"This very vicious attack took place practically on the eve of yet another massive protest in Hong Kong on Sunday," said Claudia Mo.

"We can’t help feeling that this entire thing is part of a plan to shed blood at Hong Kong’s peaceful protests."

Mo was one of several lawmakers whom security officials escorted out of a question-and-answer session with Chief Executive Carrie Lam on Thursday after they heckled her for the second day in a row.

Hong Kong has been roiled by more than four months of sometimes violent anti-government protests in its worst crisis in decades, posing the biggest popular challenge to Chinese President Xi Jinping since he came to power in 2012.

What began as opposition to a now-withdrawn extradition bill has evolved into a pro-democracy movement fanned by fears that China is stifling freedoms guaranteed by a "one country, two systems" formula adopted when Britain returned Hong Kong to China in 1997.

In an annual policy address on Wednesday, the Beijing-backed Lam had offered no direct olive branch to pro-democracy protesters, hoping instead to ease resentment by building more public housing.

The densely populated former British colony has one of the world's most expensive real estate markets and the inability of many young people to get a place of their own has added fuel to the pro-democracy protests.

Unveiling one of the city's boldest housing proposals in years, Lam vowed to take back large tracts of land held by a handful of powerful developers and create public housing.

"We are determined to create homeownership opportunities for people of different income groups such that they will happily make Hong Kong their home," Lam said.

At a news conference, Lam rejected two of the protesters' five demands - amnesty for those charged and universal suffrage - calling the first illegal and the second beyond her power as chief executive.

In a statement after her briefing, Civil Human Rights Front in a statement called for Lam to resign, although she has rejected such calls for months.

"We urge Carrie Lam to stop destroying Hong Kong, respond to the five major demands, and step down," the group said.