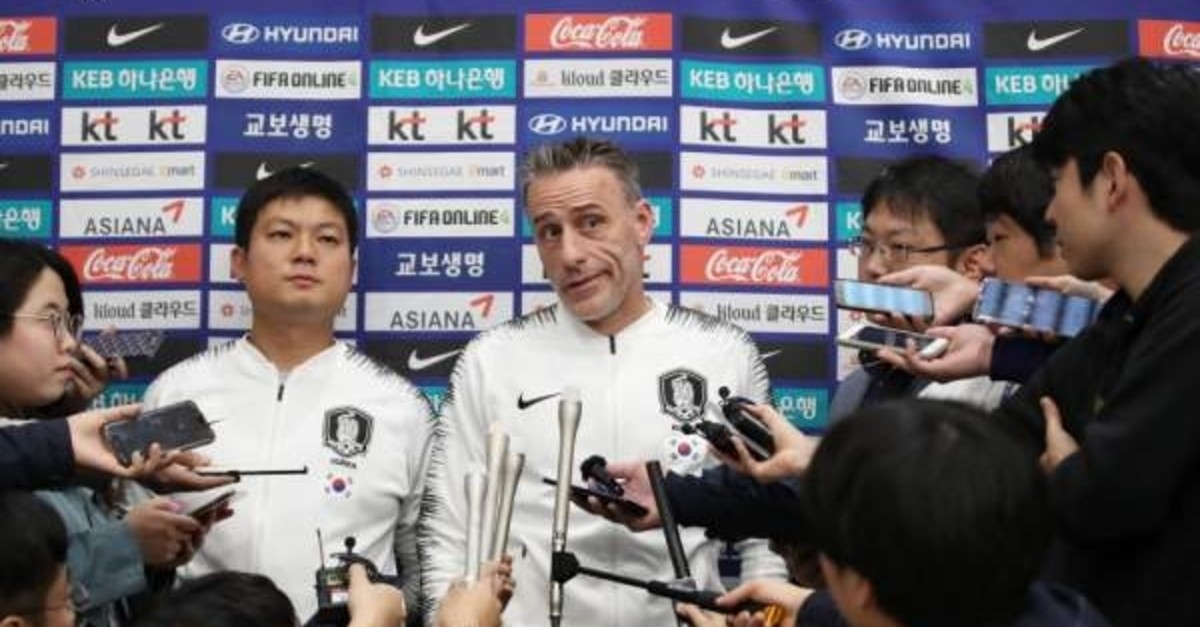 South Korea's national soccer team described their World Cup qualifier against North Korea in Pyongyang as a "rough" match played under strange conditions that may be raised with FIFA.

The historic match ended in a scoreless draw Tuesday at huge Kim Il Sung Stadium, which was empty of spectators. The match was also under a media blackout, and the South Koreans first spoke to journalists about the playing conditions upon their return to Seoul on Thursday.

"The opponents were very rough, and there were moments when very abusive language was exchanged," Tottenham striker Son Heung-min said.

"It was hard to concentrate on the match because you were thinking about avoiding injury first ... It's an accomplishment that we returned from a game like that without injury," Son told reporters at Incheon International Airport.

The team's general manager Choi Young-il said the South Korean soccer association, known as KFA, will discuss whether to submit a complaint to FIFA over what he described as North Korea's failure to properly accommodate the visiting team and decision to block media and spectators.

North Korea kept out South Korean media and spectators and refused a live broadcast from the stadium.

FIFA President Gianni Infantino also attended the match, and on Tuesday issued a statement saying he was "disappointed to see there were no fans in the stands." "We were surprised by this and by several issues related to its live broadcast and problems with visas and access for foreign journalists," Infantino said.

Pyongyang's official Korean Central News Agency published only a brief match report, saying the "game of attacks and counterattacks ended in a draw 0:0." North Korea did provide a DVD recording of the match to South Korean soccer officials, but South Korean TV channel KBS canceled plans to broadcast the game on tape delay because of the video's quality, according to the broadcaster and KFA.

"We probably won't get another video from North Korea," said Park Jae-sung, a KFA official, adding the video was unfit for South Korea's high-definition TV services The North had been expected to have a unique home advantage in the 50,000-capacity stadium devoid of South Korean fans, but South Korean players and soccer officials were surprised to realize there would be no home crowd support, either.

Son said it was regrettable that South Korea, which has a stronger team on paper, couldn't return with three points, but admitted that their opponents' physical play got into the players' heads.

Choi, a former defender who played for South Korea during the 1994 World Cup held in the United States, said the North Koreans played like they were "waging a war," violently swinging their elbows and hands and driving into their opponents knee first when competing for balls in air.

"I have never seen something like this in soccer before," he said.

When they weren't playing or training, South Korean players and staff were holed up at the Koryo Hotel, which appeared to have no other guests, Choi said. They had no outside contact, having left their cellphones at the South Korean Embassy in Beijing before entering the North. Choi said North Korean officials didn't inform the South Korean team the match would be played in an empty stadium.

"We got there an hour and a half early and kept thinking that the gate will open and a crowd of 50,000 would pour in," Choi said. "But the gate never opened until the end." The game was the first competitive meeting between the national men's teams in the North Korean capital, although the North hosted the South in a friendly in 1990.

North Korea in recent months has severed virtually all cooperation with the South amid deadlocked nuclear negotiations with the United States, and repeatedly ignored the South's calls for discussions on media coverage issues and allowing South Korean cheer squads ahead of the game.

South Korean Unification Minister Kim Yeon-chul, Seoul's point man on North Korea, said during a parliamentary session on Thursday that the way the North handled the game was "very disappointing" and reflected the stalemate in inter-Korean relations.

Some experts say the North was expressing its political displeasure with the South by shutting out rival reporters and fans, but opted to compete in an empty stadium at home in an effort to level the playing field and avoid questions about fairness.

Others say North Korea might have been concerned about the possibility of its national team losing to the South in front of a massive home crowd, which would have been a humiliating development for leader Kim Jong Un, who has a passion for sports.

The awkward buildup to the game "demonstrates the immense discontent North Korea has for (South Korea)" for its failure to break away from its U.S. ally and restart inter-Korean economic projects held back by U.S.-led sanctions, said Choi Kang, vice president of Seoul's Asan Institute for Policy Studies.

The fate of the game in Pyongyang was uncertain until last month when the governing body of Asian soccer informed the KFA that the North decided it would host the qualifier as scheduled.

South Korea's two Group H matches against North Korea will be crucial in qualifying for the World Cup. The second match between the Koreas is scheduled for June 4 in South Korea.

South Korea has dominated the past 17 inter-Korean matches with seven wins, one loss and nine draws.