At least 7 civilians killed in fresh firing across Kashmir line 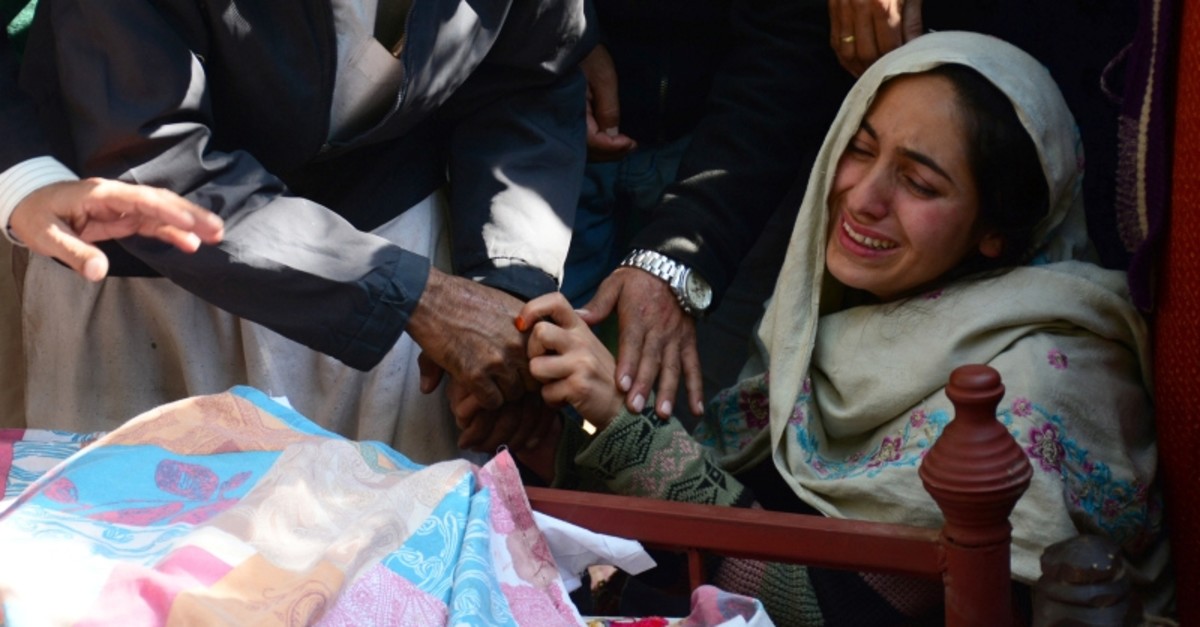 A woman mourns the death of her relative, who, according to the family, was killed in shelling, during a funeral in Nauseri village, near line of control in Pakistan-administered Kashmir, Oct. 20, 2019. (Reuters Photo)
by Compiled from Wire Services Oct 20, 2019 6:52 pm

At least 7 civilians were killed Sunday in firing along the de facto India-Pakistan border in Kashmir, officials said, as both countries accused each other of trying to destabilize the disputed region.

Pakistan accused Indian troops of "heavily" shelling near the Line of Control (LoC), killing seven people including a Pakistani soldier while eight other civilians and two soldiers were wounded.

The fresh casualties, including two laborers, were reported from remote Jura, Shahkot and Nousehri sector of Muzaffarabad and Neelum districts of Pakistan administered Kashmir known as Azad Jammu and Kashmir (AJK).

According to the local administration, the Indian forces targeted the civilian population and destroyed several houses including a hut of a laborer.

"Two laborers who were working on road construction belonging to Khyber Pakhtunkhawa province were also martyred in the shelling as Indian troops hit their hut through mortar," Badar Munir, deputy commissioner of Muzaffarabad, told Anadolu Agency on the phone.

Badar added that all injured have been shifted to a local hospital in Muzaffarabad, capital of Azad Jammu and Kashmir.

The Pakistan army in a statement claimed that at least nine Indian soldiers were killed and several others injured in retaliation.

During exchange of fire, one soldier has also been martyred and two others were wounded, he added.

The Pakistan military spokesman rejected the Indian claim to have targeted the alleged militant camps near the LoC and said "targeting innocent civilians by Indian Army is an attempt to justify their false claims of targeting alleged camps.''

"Indian Army shall always get befitting response to CFVs. Pakistan Army shall protect innocent civilians along LoC & inflict unbearable cost to Indian Army. Indian lies to justify their false claims & preparations for a false flag operation will continue to be exposed with truth," he added.

The Indian Army on Sunday used artillery guns to target ''terrorist camps'' in Pakistan occupied Kashmir which have been actively trying to push ''terrorists'' into Indian territory, according to some Indian media.

According to a statement by the Indian Army, "Indian forces cause heavy damages and casualty to Pakistan after two Indian soldiers and one civilian were killed in cease-fire violation by Pakistan Army in Tangdhar sector (Jammu and Kashmir) today."

''Indian Army retains the right to respond at a time and place of its choosing in case Pak Army continues to assist terrorist activities across Indian borders,'' the army said.

Two soldiers and a civilian were killed and three others injured in "unprovoked fire by Pakistan" in the mountainous Kupwara district, a spokesman for the army told AFP earlier Sunday.

Several homes were damaged in the attack and three civilians were being treated in a hospital, he added.

Foreign ministry spokesman rejected the Indian media reports about "launchpads" being targeted by India along the LoC and termed the act as the Indian threat to regional peace and security. The spokesman has called upon the P5 countries to ask India to provide information about the so-called alleged "launchpads" and stated its willingness to arrange a visit of the P5 diplomats to those locations to expose Indian falsehood.

P5 refers to the permanent members of the U.N. Security Council.

Already fraught relations between the two South Asian nuclear rivals have further flared up after India scrapped the special provisions of the state of Jammu and Kashmir. The state has been under a near-complete lockdown since Aug. 5.

Indian authorities, however, claim that daytime restrictions have been lifted in 93% of the region, a claim Anadolu Agency could not verify independently.

From 1954 until Aug. 5, 2019, Jammu and Kashmir enjoyed special status under the Indian Constitution, which allowed it to enact its own laws.

The provisions also protected the region's citizenship law, which barred outsiders from settling in and owning land in the territory.