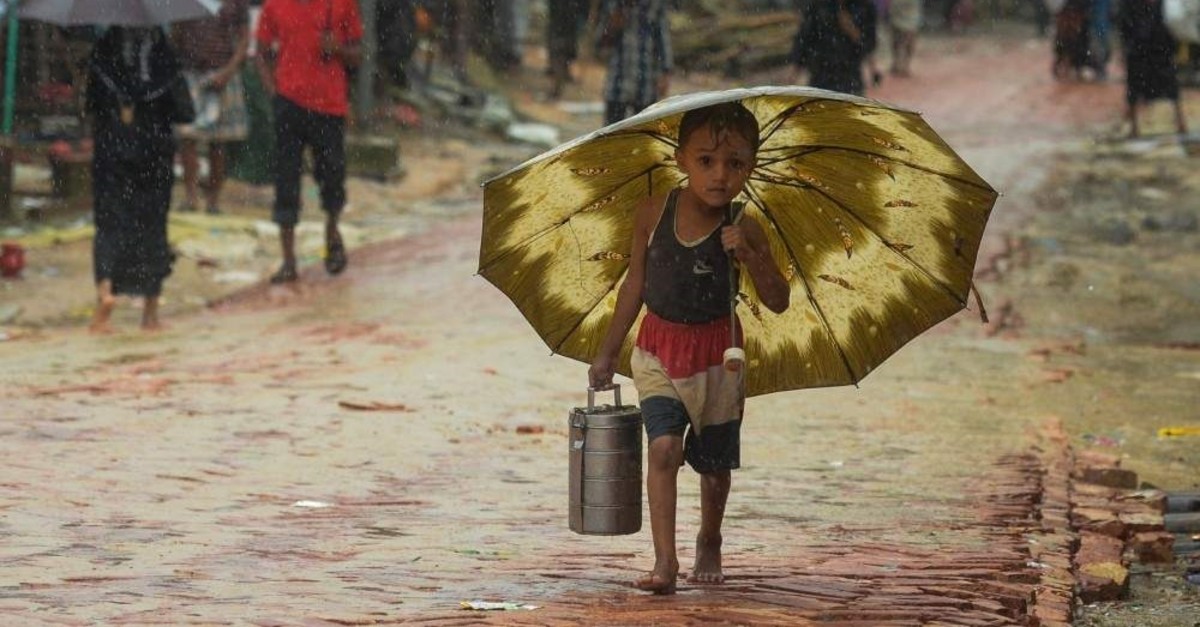 A Rohingya refugee boy shelters under an umbrella as he makes his way during a monsoon rain at the Kutupalong refugee camp, Ukhia, Sept. 12, 2019. (AFP Photo)
by Compiled from Wire Services Oct 20, 2019 5:35 pm

Thousands of Rohingya living in Bangladesh refugee camps have agreed to move to an island in the Bay of Bengal, officials said yesterday, despite fears the site is prone to flooding.

Dhaka has long wanted to move 100,000 refugees to the muddy silt islet, saying it would take the pressure off the overcrowded border camps where almost a million Rohingya live. International aid groups and rights bodies including the U.N., Human Rights Watch and Amnesty International, however, have repeatedly warned the move could be risky and urged Bangladesh to go through the project with Rohingya refugees on a voluntary basis and with due clarification.

Bangladesh’s refugee commissioner, Mahbub Alam, said officials overseeing the relocation would be posted to Bhashan Char island in the next few days. “Approximately 6,000-7,000 refugees have already expressed their willingness to be relocated to Bhashan Char,” Alam said, adding that “the number is rising.”
Until the Rohingya resettlement project began a year ago, the island was apparently uninhabited, mostly used for cattle grazing and as a hub for pirates. The islet is about 30 kilometers from the mainland, and 52 kilometers from the southern Noakhali district. In 2013, the area was declared a forest reserve. Motorboats are the only mode of travel to the island. The humanitarian conditions on the islet have long been criticized by the aid groups.

Rohingya Muslims are the most persecuted minority in the world according to U.N. figures and continue to suffer from oppression under the Myanmar government, the army and Buddhist extremists. Some 740,000 Rohingya fled Myanmar in Aug. 2017 in the face of a military crackdown, joining 200,000 refugees already in makeshift tent settlements in Cox’s Bazar.