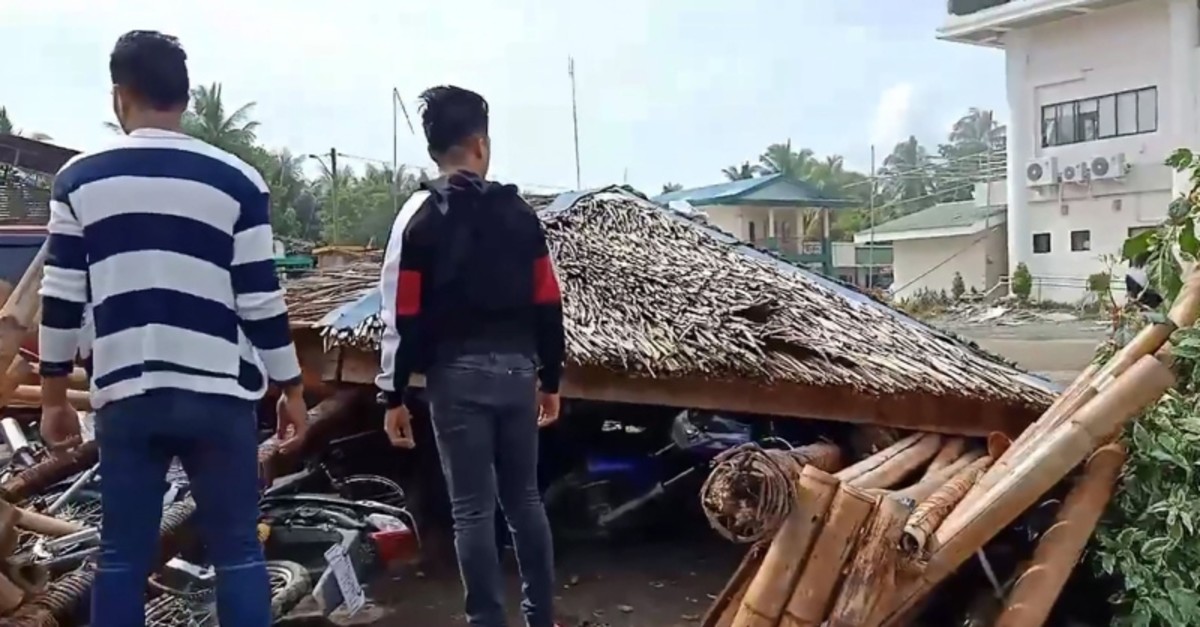 Handout video grab taken Oct. 29, 2019 from the Facebook page of Anthony Allaga shows residents standing next to motorcycles under a temporary shelter after it collapsed during a 6.6-magnitude earthquake in Magsaysay on Mindanao island. (AFP Photo)
by Compiled from Wire Services Oct 29, 2019 9:53 am

A magnitude 6.6 earthquake shook the southern Philippines on Tuesday, killing at least two people, injuring dozens and sending people dashing out of homes and buildings in a region still recovering from recent strong quakes.

The earthquake was caused by movement in a local fault about 7 kilometers (4.3 miles) deep about 25 kilometers northeast of Tulunan town in Cotabato province, the Philippine Institute of Seismology and Volcanology said. The U.S. Geological Survey had the same measurement, adjusted from a preliminary 6.8.

The Office of Civil Defense reported a 66-year-old man died from head injuries apparently after being hit by a falling object in South Cotabato province's capital city of Koronadal, where 30 other people were injured as they dashed out of homes, offices and shopping malls as the ground shook.

More than a dozen people were injured in M'lang town in Cotabato and Cagayan de Oro province, according to OCD.

Several cities and towns suspended classes to allow inspections of school buildings. The quake “may have caused structural and electrical damage to buildings and houses," says Mayor Sara Duterte-Carpio of Davao.

"Our municipal hall has been destroyed," said Reuel Limbungan, mayor of Tulunan, a town near the epicenter.

"We are receiving lots of reports of injuries, but we have to confirm them," he told AFP.

Rescue teams have begun fanning out to assess the damage to the region, where electricity and phone services were knocked out by the power of the quake.

"It is possible to have other aftershocks which could add to the damage. People should stay outside for now," said Renato Solidum, head of the Philippines' seismology institute.

At least three government and privately owned buildings damaged in another quake earlier this month sustained further damages and remained off limits to the public.

One of the deadliest quakes to hit the Philippines recently was in April, provoking the collapse of a building near the capital Manila.

At least 16 people were killed when the building pancaked in the worst-hit Pampanga province.

The Philippines lies in the so-called Pacific "Ring of Fire," an arc of faults around the Pacific Ocean where most of the world's earthquakes occur.