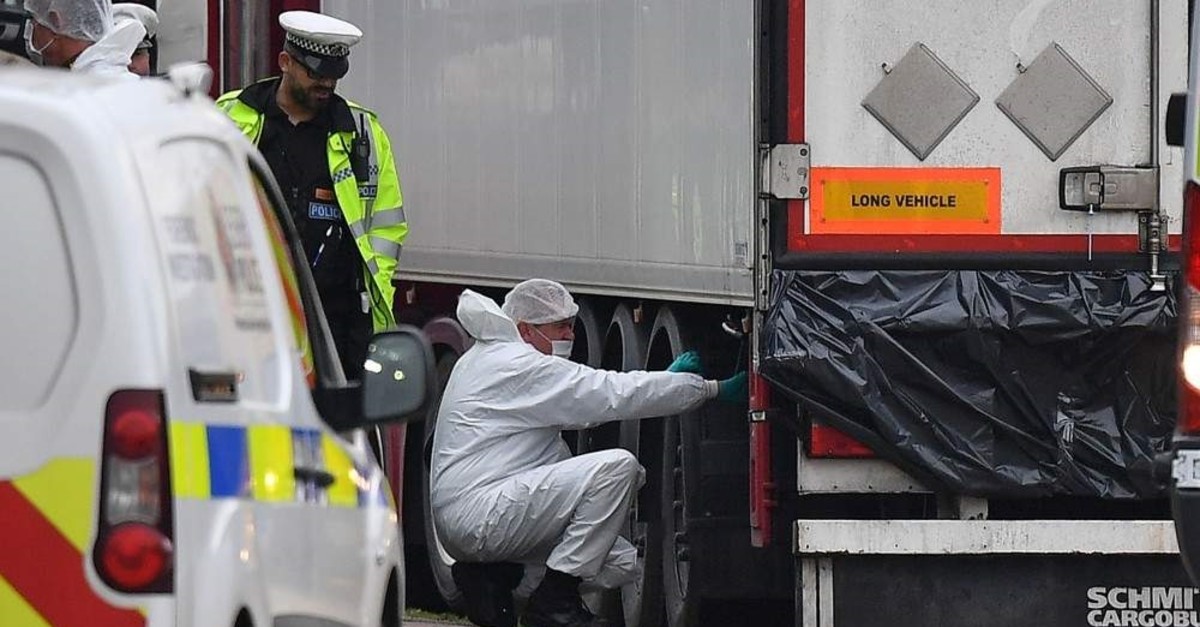 This Oct. 23, 2019, file photo, shows police forensics officers work on a lorry, found to be containing 39 dead bodies, at Waterglade Industrial Park in Grays, east of London. (AFP Photo)
by Associated Press Nov 05, 2019 11:50 am
Vietnamese state media have reported another arrest over the deaths of dozens of migrants in England and cite police as saying a suspect had organized for people to travel to Russia before being smuggled to the West.
The state-run Tuoi Tre newspaper reported an arrest was made in Nghe An province Monday in relation to the deaths of 39 Vietnamese migrants in a refrigerated truck container last month.
Vietnam so far has arrested two people in Ha Tinh province and nine in Nghe An who face charges of organizing people smuggling.
The newspaper cited Nguyen Huu Cau, chief of Nghe An provincial police, as saying that one of those arrested, who used to live in Russia, organized people to travel to Russia then smuggled them to Germany before getting to a third country.
The suspected truck driver, a man from Northern Ireland, has been charged with manslaughter and conspiracy to traffic people.
A second man is being held in Ireland pending extradition and has been charged with manslaughter, human trafficking and immigration offenses.
British police are still working to identify the victims — 31 men and eight women — with assistance from Vietnam, where families reported their relatives missing while thought to have been in transit to England. DNA samples for identification have been provided by 21 families from Nghe An and 10 from Ha Tinh province.
Last Update: Dec 20, 2019 1:27 am
RELATED TOPICS