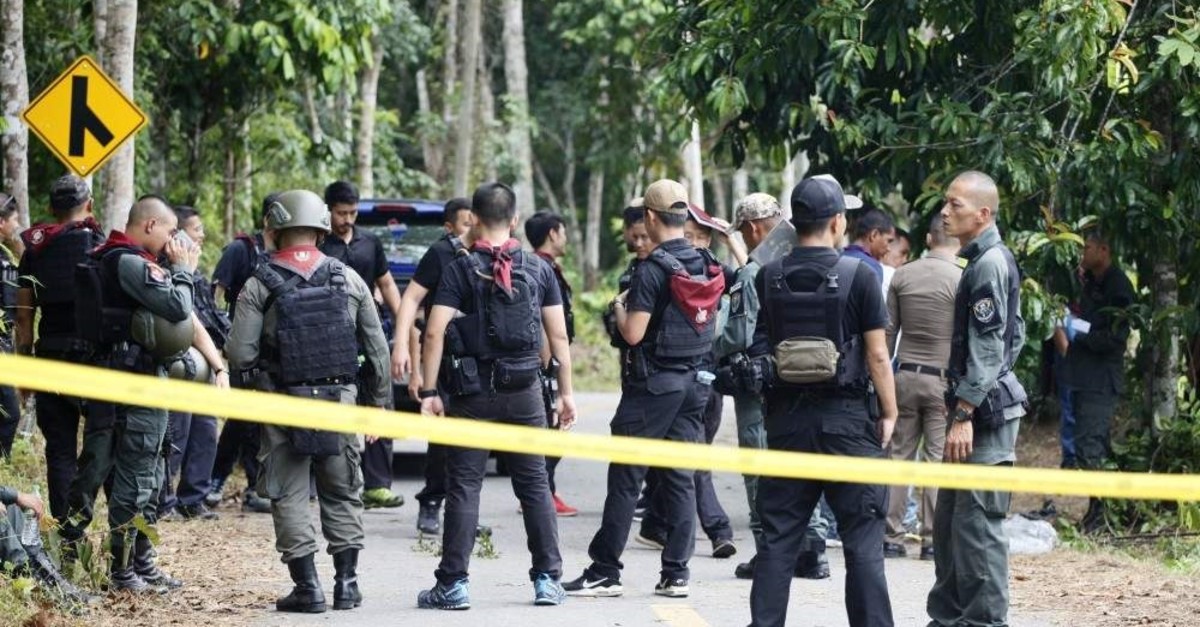 In the largest death toll in years, "12 were killed at the scene, two more (died) at the hospital, and one died this morning," southern army spokesman Pramote Prom-in said. "These acts were by militants."

Some of the attackers may have been injured in an exchange of gunfire during the attack late Tuesday night, based on blood-stained clothing at the scene, said Col. Kiattisak Neewong, an army spokesperson who is heading to the scene in Yala province. Officials said the assailants took several weapons from the checkpoints, including an M16 rifle and three shotguns.

A separatist insurgency has left about 7,000 people dead since 2004 in Thailand's three southernmost provinces of Pattani, Narathiwat and Yala. Police, teachers and other government representatives are often targets of the violence. The region is under martial law, heavily policed by the military and sometimes staffed with trained civilian volunteers, with residents and rights groups accusing them of heavy-handed tactics.

Kiattisak said four of the slain officers were women and one was a doctor. Thailand's volunteer security forces in the south are raised from local villages and receive weapons training from the army but no salary. They are usually issued shotguns but also often carry personal handguns.

Pol. Col. Thaweesak Thongsongsi, a superintendent in a Yala police station, said nails had been scattered on a highway to disable vehicles entering Yala. A small explosive was found placed near an electrical pole to knock out power, and several burning tires were left at a school as well. The areas surrounding the checkpoints have been closed off and are currently under forensic investigation.

Prime Minister Prayut Chan-O-Cha said the perpetrators must "be brought to justice," according to Defense Ministry spokesman Kongcheep Tantravanich.

The separatists seeking autonomy for the culturally distinct region bordering Malaysia have been fighting the Buddhist-majority Thai state, which colonized the area over a century ago.

The conflict is characterized by tit-for-tat attacks that usually target symbols of the Thai state and its security forces but civilians from both Muslim and Buddhist communities often get caught in the crossfire.

The violence has bled into tourist destinations, like in 2012 when a series of car bombs in Songkhla province's Hat Yai killed 13 people.

The incidents have been fewer in recent years, but the hits have been "more intense," said Don Pathan, an expert on the so-called Deep South.

It comes days after Bangkok hosted the Association of Southeast Asian Nations (ASEAN) summit, which brought head of states from all over the world – along with hundreds of foreign press media, said Pathan.

"It (the attack) is a reminder that they are still here," he said.

The rebels accuse the state of railroading their distinct culture as well as carrying out routine abuses that go unpunished.

The latest incident stoking outrage in the region was the death of Abdulloh Esormusor, a Muslim man who was detained by the military and left in a coma after being interrogated at a notorious Thai detention center.

Suspects are routinely taken for interrogation and held under emergency laws in detention centers where rights groups have documented torture.