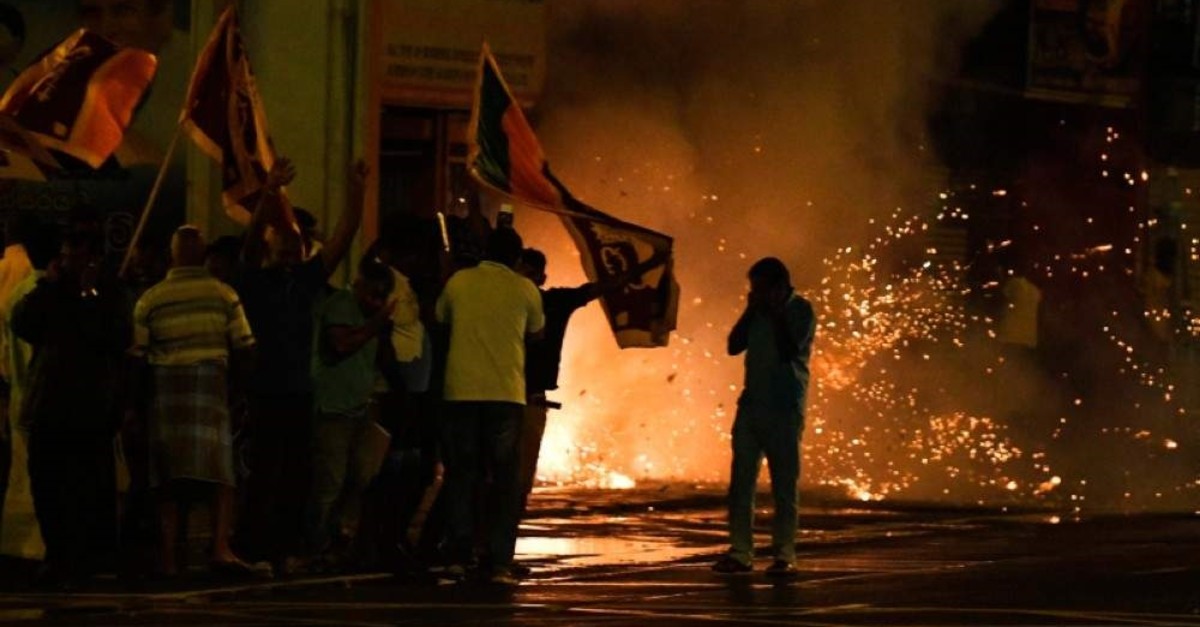 Supporters of presidential candidate Sajith Premadasa light up firecrackers to celebrate the closing of the voting at the end of the presidential election in Colombo on November 16, 2019. (AFP Photo)
by Nov 16, 2019 7:23 pm

Minority Tamils and Muslims are seen as crucial in the close election, and the attack in the northwest of the island -- in which no one was injured -- was likely aimed at deterring people from heading to the polls.

Election chief Mahinda Deshapriya said the shooting may not have prevented voting as just over 80 percent of the 15.99 million electorate was estimated to have turned out Saturday, compared to 81.5 percent at the previous presidential poll in 2015.

"Comparatively this is the most peaceful presidential election we have had in this country," Deshapriya told reporters at the end of a 10-hour voting period.

Assailants set fire to tyres on the road and set up makeshift roadblocks before shooting at and pelting with stones two busses in a convoy of more than 100, police said. After casting ballots, the voters were given an armed escort back home.

In the Tamil-dominated northern peninsula of Jaffna, meanwhile, police said they arrested 10 men they suspected of "trying to create trouble", while also complaining that the army had illegally set up roadblocks that could stop people getting to polling stations.

Such tactics are nothing new in Sri Lanka, which emerged from a horrific civil war only a decade ago. At the 2015 election, there was a series of explosions in the north.

Some 85,000 police were on duty for the election with a record 35 candidates running for president, an office with considerable power similar to the French political system.

Results could come as early as midday (0630 GMT) on Sunday if there is a clear winner.

One of the two frontrunners is grey-haired retired army lieutenant colonel Gotabaya Rajapaksa, 70, younger brother to the charismatic but controversial Mahinda Rajapaksa, president from 2005-15.

Dubbed the "Terminator" by his own family, "Gota" is promising an infrastructure blitz and better security in the wake of the terror attacks in April that killed 269 people.

"Gotabaya will protect our country," construction worker Wasantha Samarajjeew, 51, said as he cast his ballot in Colombo.

He is also pushing development and security as well as free sanitary pads for poor women, earning him the nickname "Padman" after a famous Bollywood movie.

The Rajapaksas are adored by Sri Lanka's Sinhalese majority for defeating Tamil Tiger separatists and ending a 37-year civil war in 2009.

They are detested and feared by many Tamils, who make up 15 percent of the population. The conflict ended with some 40,000 Tamil civilians allegedly killed by the army.

During Mahinda Rajapaksa's presidency, Gotabaya was defence secretary and effectively ran the security forces, even allegedly overseeing "death squads" that bumped off political rivals, journalists and others.

He denies the allegations.

What also concerns Western countries, as well as India, is that strategically located Sri Lanka moved closer to China under Mahinda Rajapaksa, even allowing two Chinese submarines to dock in Colombo in 2014.

Under its Belt and Road Initiative spanning Asia and beyond, China loaned and granted Sri Lanka billions of dollars for infrastructure projects, many of which turned into white elephants and mired in corruption allegations.

Western capitals "should give a fair chance to us", Basil Rajapaksa, another brother, told reporters. "They can't be monitors of this country. They must be partners."