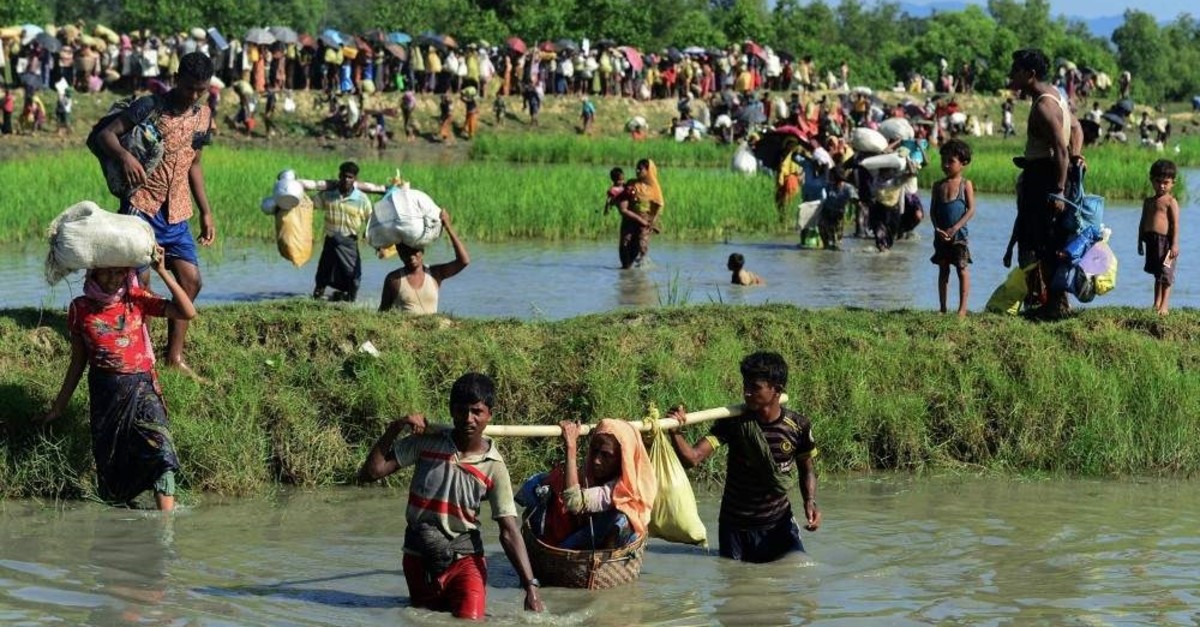 In this file photo taken on Oct. 16, 2017, Rohingya refugees carry a woman over a shallow canal after crossing the Naf River as they flee violence in Myanmar to reach Bangladesh. (AFP Photo)
by Associated Press Nov 16, 2019 9:23 pm

Myanmar's government has rejected the International Criminal Court's decision to allow prosecutors to open an investigation into crimes committed against the country's Rohingya Muslim minority.

Government spokesman Zaw Htay said at a Friday night press conference that Myanmar stood by its position that the Netherlands-based court has no jurisdiction over its actions. His statement was the first official reaction since the court on Thursday agreed to proceed with the case.

Myanmar has been accused of carrying out human rights abuses on a massive scale in the western state of Rakhine in 2017 during what it described as a counterinsurgency campaign.

Zaw Htay cited a Myanmar Foreign Ministry statement from April 2018 that because Myanmar was not a party to the agreement establishing the court, it did not need to abide by the court’s rulings.

"It has already been expressed in the statement that the investigation over Myanmar by the ICC is not in accordance with international law,” he told reporters in the Myanmar capital Naypyitaw.

The court’s position is that because Myanmar's alleged atrocities sent more than 700,000 Rohingya fleeing to Bangladesh for safety, it does have jurisdiction since Bangladesh is a party to the court and the case may involve forced deportation.

Last year’s statement charged that the court’s prosecutor, by claiming jurisdiction, was attempting "to override the principle of national sovereignty and non-interference in the internal affairs of other states.”

The 2018 statement also said Myanmar’s position was that it "has not deported any individuals in the areas of concern and in fact has worked hard in collaboration with Bangladesh to repatriate those displaced from their homes.”

However, there still has been no official repatriation of the Rohingya, and human rights activists charge that Myanmar has not established safe conditions for their return.

Zaw Htay said that Myanmar has already set up its own Independent Commission of Enquiry, which was making progress in its investigations. He noted that the military as well had established a Court of Enquiry.

"If we find abuses (of human rights), we will take action according to the law," he said.

An independent U.N. fact-finding mission that collected extensive evidence that it said shows that trials for genocide and crimes against humanity are merited declared earlier this year that justice could not be fairly served by judicial processes inside Myanmar. It said an international mechanism or process was needed for accountability.

Gambia, on behalf of the Organization of Islamic Cooperation, filed a case Monday at the International Court of Justice accusing Myanmar of genocide in its treatment of the Rohingya.