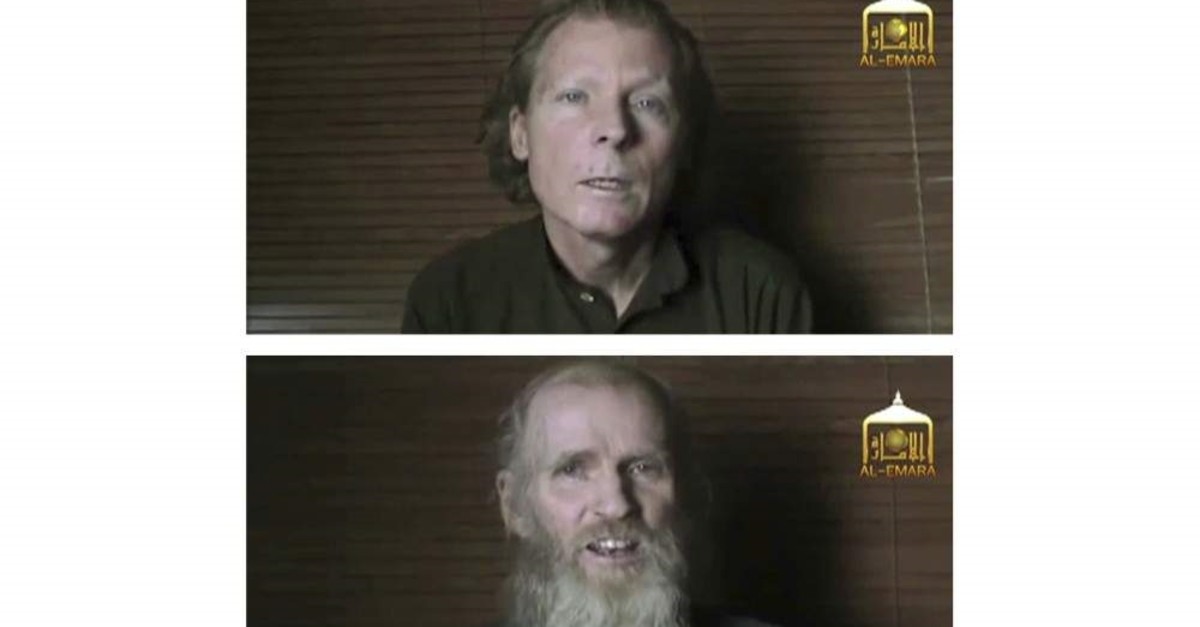 This two-photo combination image taken from a video released on June 21, 2017, by the Taliban spokesman Zabihullah Mujahid, shows kidnapped teachers Australian Timothy Weeks (top)and American Kevin King, who were both abducted by the insurgents in Afghanistan in August 2016. (EL-EMARA Taliban via AP)
by Nov 19, 2019 1:31 pm
The Taliban released two hostages in southern Afghanistan on Tuesday, handing them over to U.S. forces more than three years after they were abducted in Kabul, insurgent sources and police told AFP.
The release of American Kevin King and Australian Timothy Weeks, both professors at the American University in Kabul, comes one week after President Ashraf Ghani announced that Afghanistan would free three high-ranking Taliban prisoners in an apparent swap that he hoped would help jump-start peace talks.
"This morning at around 10 a.m. two American University professors were released in Nawbahar district of Zabul province. They were flown out of Zabul by American helicopters," a local police source said.
Three Taliban sources in the province also said the hostages had been released.
"We released the professors and are now expecting the Kabul government and Americans to release our three prisoners as soon as possible," one of them told AFP.
There was no immediate comment from the U.S. embassy in Afghanistan. Afghan officials in Kabul said they would release a statement shortly.
Ghani had first announced the exchange on Nov. 12, saying the Taliban prisoners held at Bagram prison would be "conditionally" released.
They include Anas Haqqani, who was seized in 2014 and whose older brother is the deputy Taliban leader and head of the Haqqani network, a notorious Taliban affiliate.
Afghan authorities accuse Anas of being a high-level player in the network. The Taliban has long demanded his release, insisting he is a student.
The other two Taliban prisoners to be released are Haji Mali Khan, believed to be the uncle of Sirajuddin Haqqani, and Abdul Rashid, said to be the brother of Mohammad Nabi Omari, a member of the Taliban's political office in Qatar.
Ghani said he hoped the swap would "pave the way" for the start of unofficial direct talks between his government and the Taliban, who have long refused to negotiate with the Kabul administration.
King and Weeks were kidnapped by gunmen wearing military uniforms in the heart of Kabul in August 2016.
They later appeared looking haggard in a Taliban hostage video, with the insurgents going on to say that King was in poor health.
Ghani said Tuesday that the pair had been "deteriorating while in the custody of the terrorists."
Last Update: Dec 20, 2019 1:47 am
RELATED TOPICS