US, South Korea fail to agree on sharing defense costs 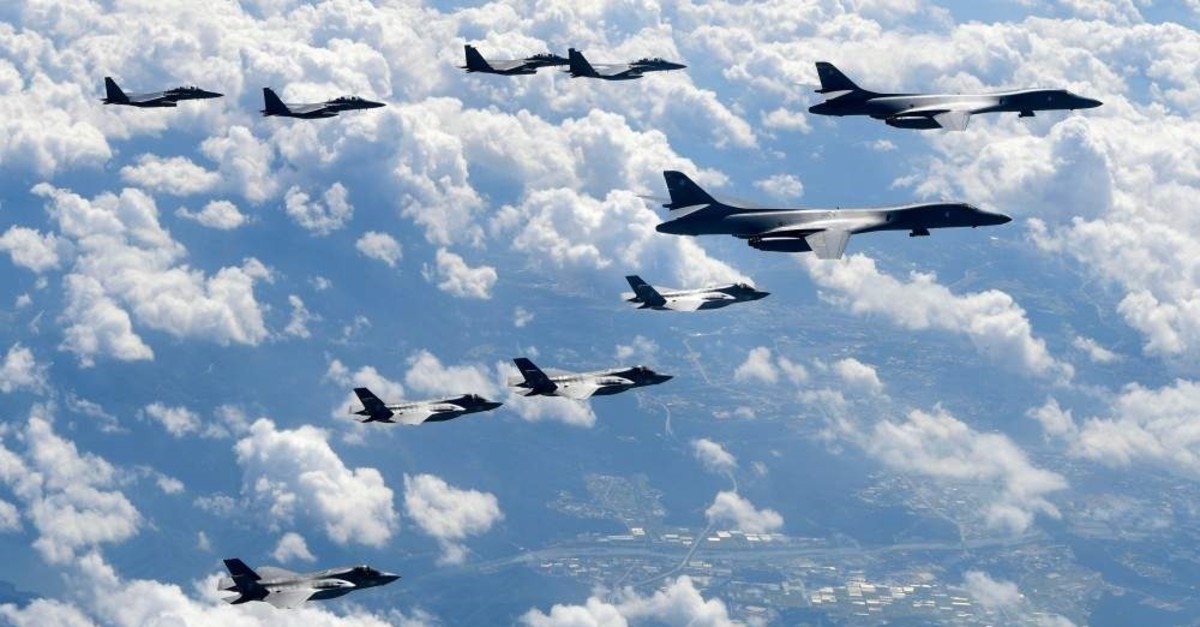 In this Sept. 18, 2017, file photo provided by South Korea Defense Ministry, U.S. Air Force B-1B bombers, F-35B stealth fighter jets and South Korean F-15K fighter jets fly over the Korean Peninsula during joint drills. (South Korea Defense Ministry via AP)
by Associated Press Nov 19, 2019 9:57 am
U.S. and South Korean officials on Tuesday publicly acknowledged the allies remain far apart in negotiations for increasing South Korea’s contributions to the costs for maintaining the American military presence on its soil.
U.S. negotiator James DeHart said the U.S. side decided to cut short a meeting that lasted less than two hours because Seoul’s proposals "were not responsive to our request for fair and equitable burden sharing.”
Seoul’s Foreign Ministry said Washington has been calling for a "drastic increase” in South Korea’s contributions which the country finds unacceptable.
The turbulent negotiations come at a delicate time for the allies, which face a growing North Korean threat and have squabbled over Seoul’s declaration to terminate a 2016 military intelligence-sharing pact with Japan amid a bilateral row.
"We look forward to resuming our negotiations when the Korean side is ready to work on the basis of partnership and the basis of mutual trust,” DeHart said, reading out a prepared statement in front of cameras. He did not take questions from reporters.
Jeong Eun Bo, a South Korean negotiator, told reporters that the countries have scheduled their next round of talks, but didn’t specify when. Jeong refused to answer when asked how much the Americans were asking for. But he said Washington has demanded that Seoul cover a broader range of costs in addition to what it has been already providing, which includes the wages of South Korean employees at U.S. bases and costs for facility construction and logistics support.
Washington and Seoul in February signed a new cost-sharing deal for 2019 that required South Korea to pay about 1.04 trillion won ($890 million), shortly before a summit in Vietnam between U.S. President Donald Trump and North Korean leader Kim Jong Un that collapsed over disagreements in exchanging sanctions relief and disarmament. South Korea in 2018 provided about $830 million, covering roughly 40 percent of the cost of the deployment of 28,500 U.S. soldiers whose presence is meant to deter aggression from North Korea. The Trump administration has been pushing for South Korea to pay more.
During a visit to South Korea last week, U.S. Defense Secretary Mark Esper pressed Washington’s case that South Korea must pay a bigger share of the costs for maintaining U.S. troops in the country.
"This is a very strong alliance we have, but Korea is a wealthy country and could and should pay more to help offset the cost of defense,” he said.
Last Update: Dec 20, 2019 1:46 am
RELATED TOPICS