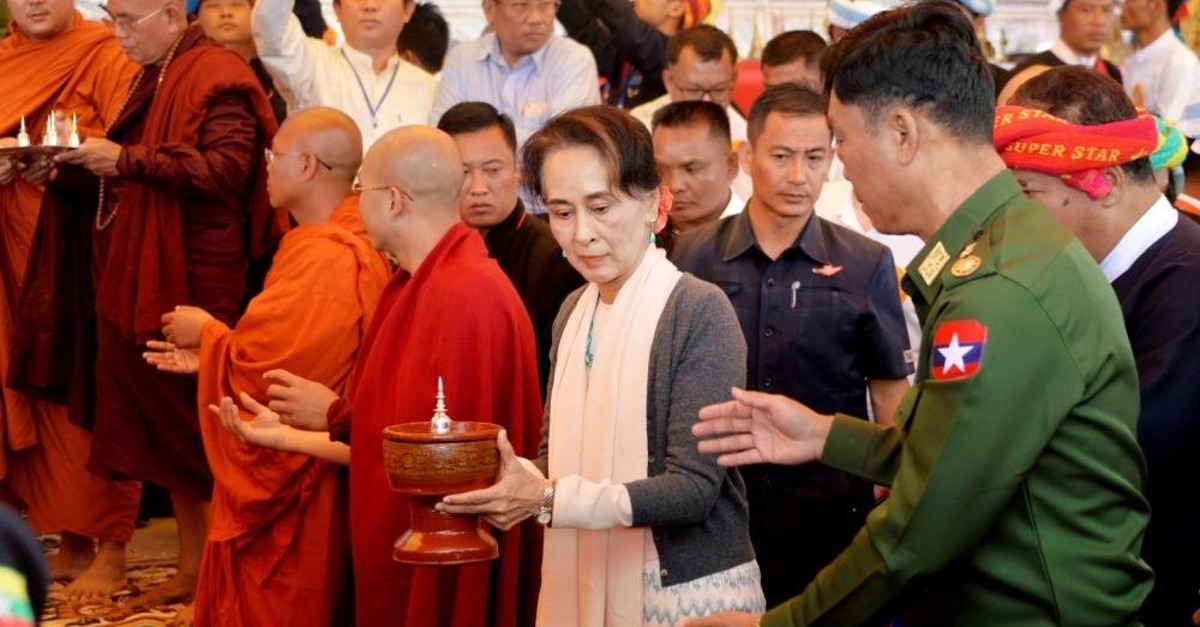 In a shock move, the office of Myanmar's State Counsellor Aung San Suu Kyi announced Wednesday the one-time democracy icon would travel to the International Court of Justice (ICJ) in The Hague to lead the legal team contesting a genocide case filed against it over the crackdown on Rohingya Muslims two years ago that forced their exodus to Bangladesh.

Myanmar’s military has been accused of carrying out mass rapes, killings and arsons against Rohingya during a counterinsurgency campaign initiated in western Myanmar in August 2017. Myanmar’s population is overwhelmingly Buddhist, and the country has long denied citizenship and other rights to the Rohingya.

Both Myanmar's military and its civilian government are behind the decision for Nobel laureate Suu Kyi to defend her country against allegations of genocide at the U.N.'s top court, an army spokesman said Thursday.

The Gambia filed the genocide case on behalf of the Organization of Islamic Cooperation, and the court based in the Netherlands said Monday it would hold public hearings on Dec. 10-12.

When filing the case, Gambia's justice minister and attorney general, Abubacarr Marie Tambadou, told The Associated Press he wanted to "send a clear message to Myanmar and to the rest of the international community that the world must not stand by and do nothing in the face of terrible atrocities that are occurring around us. It is a shame for our generation that we do nothing while genocide is unfolding right before our own eyes."

The head of a U.N. fact-finding mission on Myanmar warned last month that "there is a serious risk of genocide recurring,” and the mission also said in its final report in September that Myanmar should be held responsible in international legal forums for alleged genocide against the Rohingya.

Myanmar has strongly denied carrying out organized human rights abuses. The brief announcement Wednesday night on the effort “to defend Myanmar’s national interest” did not specify that Gambia’s application to the court involved genocide, but said it was “with regard to the displaced persons from the Rakhine state,” the area from which the Rohingya fled.

It said Suu Kyi will lead the team of international lawyers in her capacity as the foreign minister.

"We're cooperating in this case and our legal experts are working together," military spokesman Brig. Gen. Zaw Min Tun told AFP Thursday, referring to the armed forces and civilian government.

He also confirmed Suu Kyi would soon meet powerful army chief Min Aung Hlaing, with whom she has long had strained ties.

Akila Radhakrishnan, president of the New York-based Global Justice Center, said Suu Kyi and Myanmar’s civilian government “failed to act against genocide in Rakhine State with any level of urgency and have taken no steps to hold the military to account.”

“The international community should no longer have illusions where Suu Kyi and the civilian government stand and must act to support The Gambia and take other measures to hold Myanmar accountable," Radhakrishnan said in a statement.

Government spokesman Zaw Htay said Myanmar stood by its position that the court has no jurisdiction because Myanmar was not a party to the agreement establishing the court.

The court’s stance is that it has jurisdiction because the case may involve forced deportations and because Bangladesh is a party to the court. The more than 700,000 Rohingya fleeing for their safety crossed Myanmar’s border into Bangladesh and since then have lived in crowded refugee camps there with no hope of safely returning to their home villages.

The International Court of Justice settles disputes between nations, while the International Criminal Court seeks to convict individuals responsible for crimes. Member states of the U.N. are automatically parties to the court, though they must also consent to its jurisdiction. Both courts are based in The Hague.