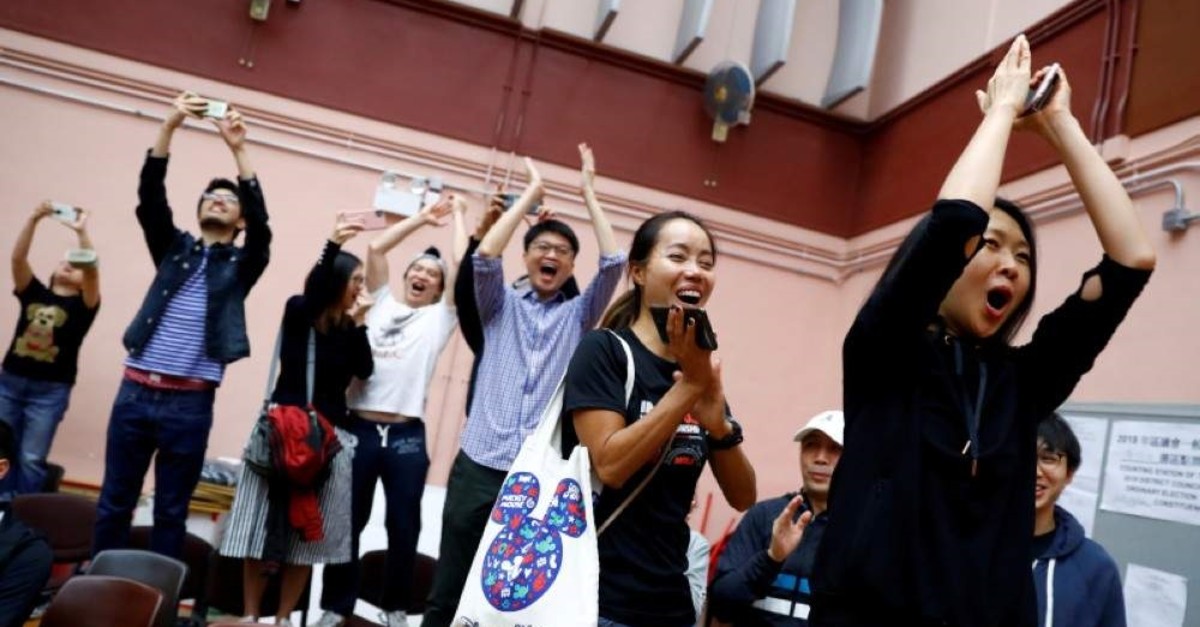 Supporters of local candidate Kelvin Lam celebrate after it was announced he won the local council elections in his district, at a polling station in the South Horizons West district in Hong Kong, China, Nov. 25, 2019. (Reuters Photo)
by Compiled from Wire Services Nov 25, 2019 8:43 am

The pro-democracy opposition appears to have swept a resounding victory in Hong Kong elections, as a record turnout dealt a clear rebuke to city leader Carrie Lam and her handling of violent protests that have divided the Chinese territory.

Some votes were still being counted Monday morning, but Hong Kong media tallied that the pro-democracy camp had won a commanding majority in the vote for 452 district council seats.

The result could force the central government in Beijing to rethink how to handle the unrest, which is now in its sixth month. The district councils have little power, but the vote became a referendum on public support for the protests.

"The government will certainly listen humbly to citizens' opinions and reflect on them seriously," Lam said Monday in a statement issued by the government.

The protest movement has several key demands including direct popular elections and a probe into alleged police brutality, and the result may bring new pressure on Lam to meet them.

She has previously rejected the demands as "wishful thinking" and repeatedly suggested the ballot would show most Hong Kongers supported her administration and an end to the protests.

She also acknowledged that the result has sparked discussion of the fact "citizens are dissatisfied with the current social situation and ... deep-seated problems," without going into details.

The pro-democracy camp hailed its strong gains in the normally low-key race as a victory for the Hong Kong people. Winning candidates said Lam must heed the demands of protesters including free elections for the city’s leader and legislature, and an independent probe into alleged police brutality.

“We won a small battle today but it shows that Hong Kong people have a chance to win the war. We will fight on,” said Henry Sin Ho-fai, a pro-democracy candidate who won.

A record 71% of the city’s 4.1 million registered voters cast ballots Sunday, well exceeding the 47% turnout in the district council elections four years ago. The large number of votes was slowing down the counting.

The largest pro-Beijing political party suffered the biggest setback, with at least 155 of its 182 candidates defeated, according to media tallies.

Among the losing incumbents was controversial pro-Beijing lawmaker Junius Ho, who was stabbed with a knife while campaigning this month.

The winners included former student leaders and a candidate who replaced activist Joshua Wong, the only person barred from running in the election.

Pro-democracy rally organizer Jimmy Sham, who was beaten by hammer-wielding assailants last month, also triumphed, as did a pro-democracy lawmaker who had part of his ear bitten off by an assailant.

The vote is the only fully democratic one in Hong Kong. Members of the legislature are chosen partly by popular vote and partly by interest groups representing different sectors of society, and the city’s leader is picked by a 1,200-member body that is dominated by supporters of the central government in Beijing.

Dixon Sing, a political science lecturer with the Hong Kong University of Science and Technology, said the election result was “tantamount to a rejection of the hard-line policy of Beijing and the Hong Kong government.”

A win would give the pro-democracy camp 117 seats in the panel that elects the city’s leader, bolstering its influence, but Beijing isn’t likely to soften its stance or make any concessions to the protesters, he said.