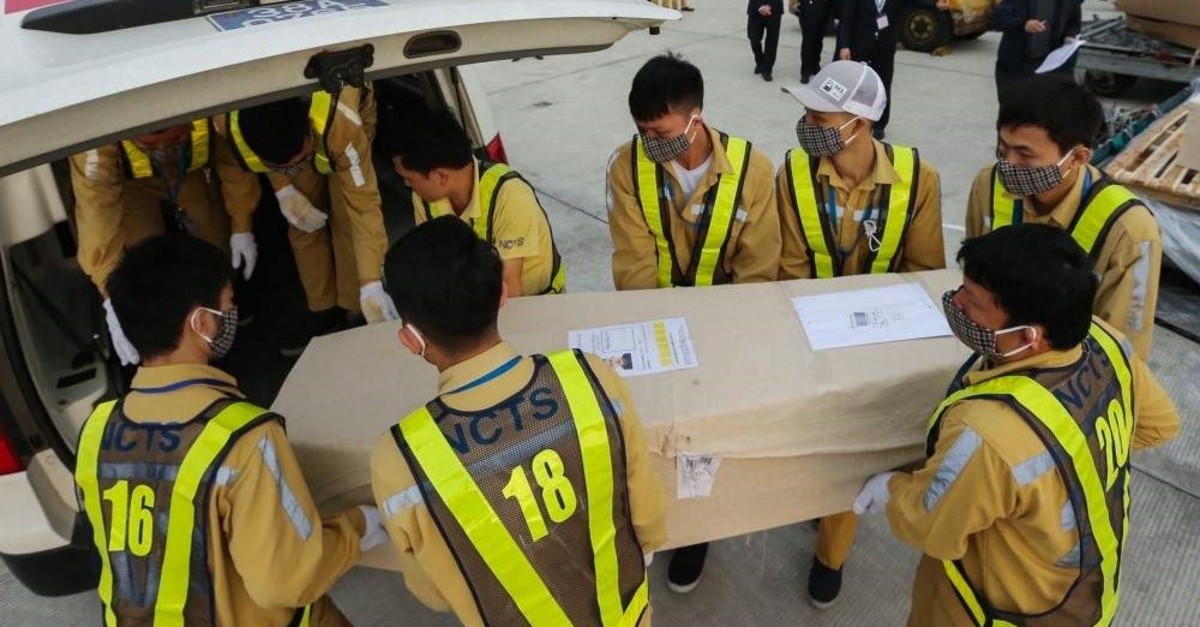 Photo taken on Nov. 27, 2019, shows ground personnel of Noi Bai International Airport carrying a casket containing the remains of one of the Vietnamese victims to an ambulance in Hanoi. (VIETNMA NEWS AGENCY via AFP)
by Nov 27, 2019 8:58 am
The first remains of the 39 people found dead in a truck in Britain last month arrived in Vietnam early Wednesday, capping a weekslong wait by families eager to bury their loved ones.
Sixteen bodies arrived on a Vietnam Airlines commercial flight from London to Hanoi, where they were met at the airport by waiting ambulances and security personnel.
They were quickly shuttled away en route to their home provinces in central Vietnam, where relatives anxiously awaited their arrival.
"We have been waiting for this moment for very long time. We will organize the funeral as soon as he's returned," said Vo Van Binh, whose son Vo Van Linh was among the victims.
"We are very sad but happy as finally my son is back," he told AFP from central Ha Tinh province, where the family had gathered awaiting the arrival of Linh's body.
An airport security source earlier confirmed that 16 bodies had arrived on the flight and would be transferred to local authorities.
All 16 were from three provinces in central Vietnam – Nghe An, Ha Tinh and Quang Binh – according to an official letter seen by AFP confirming the repatriation plans.
The other remains are expected to arrive in the coming days, though officials have not announced the schedule.
The bodies of 31 men and eight women were discovered in a refrigerated truck in an industrial state in Essex, east of London, on Oct. 23.
Police initially identified the victims as Chinese but families in Vietnam later came forward with fears their relatives were on the truck.
They have been suspended in grief for weeks waiting for their relatives' return, and many have taken out hefty loans from the government to cover the cost of repatriation.
Families were given two options for repatriation: $1,774 to bring back ashes, or $2,858 for the cost of a coffin carrying the body.
Several families told AFP they were already deep in debt after borrowing money to pay for their children's risky journey overseas, and did not know how they would repay the loans.
Authorities in Vietnam encouraged relatives to opt for ashes "to ensure speed, low cost and sanitation safety," but many paid more for the bodies so they could carry out traditional burials.
Cremation is rare in the Vietnam countryside, where many of the victims were from.
Most hailed from just a handful of central Vietnamese provinces, which are among the poorest in the country and where well-entrenched networks of brokers can easily facilitate risky trips abroad.
Ten of the victims were teenagers, including two 15-year-old boys, and the majority of the group came from Nghe An and Ha Tinh provinces.
The tragedy exposed the dangers of illegal migration from Vietnam into the United Kingdom, a top destination for Vietnamese illegal migrants.
Many arrange trips through brokers who promise them well-paid jobs, and end up working in nail bars or on cannabis farms, heavily indebted to the smugglers who organize their trips.
Several of the 39 people who died in the lorry last month paid thousands of dollars to brokers who promised the truck was the safer option – billed as the "VIP route" – their families told AFP.
On Monday, the Northern Irish driver of the truck, 25-year-old Maurice Robinson, pleaded guilty to conspiring to assist illegal immigration.
He also admitted to acquiring cash that came from criminal conduct, but did not plead guilty to 41 other charges leveled against him.
Several other people have been arrested in the U.K. over the incident while Vietnam has held at least 10 people, though none have been formally charged.
Last Update: Dec 20, 2019 1:57 am
RELATED TOPICS