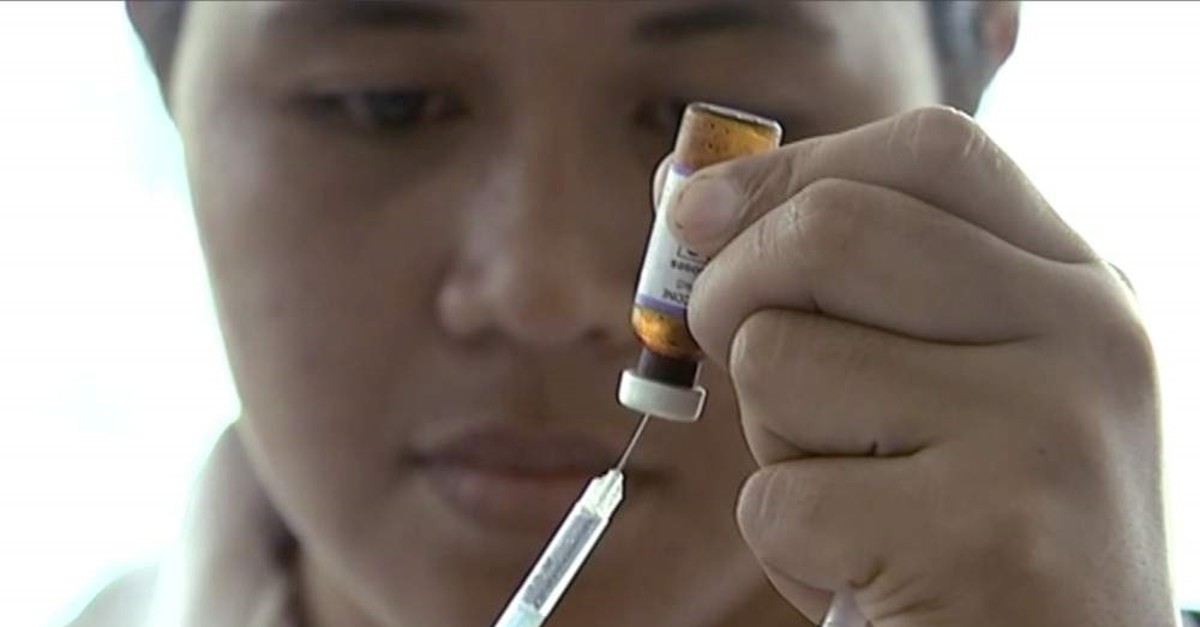 In this file image made from Nov. 25, 2019, file video, a New Zealand health official prepares a measles vaccination at a clinic in Apia, Samoa. (Newshub via AP)
by Compiled from Wire Services Dec 02, 2019 10:27 am

Samoa’s government said Monday that another five children had died within the past day from a measles outbreak, bringing the death toll from the epidemic to more than 50 as authorities race to vaccinate the entire population.

Samoa declared a national emergency last month and mandated that all 200,000 people living on the South Pacific island nation get vaccinated.

In all, 53 people have died in the outbreak since late October, including one adult and two older teenagers. Most of those who have died have been babies and young infants, including 23 children aged less than 1 and 25 children aged between 1 and 4.
The small Pacific island nation has also closed schools and is restricting travel ahead of the Christmas holiday season.

"All our schools are closed, national exams have been postponed," Reverend Vavatau Taufao, general secretary of the Congregation Christian Church in Samoa, told Reuters.

"We are still having church services but if it gets worse we will have to stop church altogether — and it's almost Christmas."

The government said more than 1,100 people have been admitted to hospitals since the outbreak began and about 180 people remain hospitalized. Among those hospitalized are 19 children who are in critical condition.

Samoan authorities believe the virus was first spread by a traveler from New Zealand.

New Zealand Prime Minister Jacinda Ardern said Monday that her country was doing everything it could to help curb the epidemic, including sending more than 50 medical professionals and thousands of vaccines to Samoa. Other countries including Britain have also sent teams and supplies.

Ardern said the natural curve of infection rates meant that “sometimes things can be worse before they are better.”

Figures from the World Health Organization and UNICEF indicate that fewer than 30% of Samoan infants were immunized last year. That low rate was exacerbated by a medical mishap that killed two babies who were administered a vaccine that had been incorrectly mixed, causing wider delays and distrust in the vaccination program.

The government said about 33,000 people were vaccinated before last month and since then, another 58,000 people have been vaccinated.

The World Health Organization has set a target of wiping out measles from most of the world by next year. It says the disease is entirely preventable thanks to a safe vaccine that has been in use since the 1960s, and that measles deaths worldwide decreased by 84% between 2000 and 2016 to about 90,000 annually thanks to better immunization.
Measles cases are rising worldwide, even in wealthy nations such as Germany and the United States, as parents shun immunization for philosophical or religious reasons, or fears, debunked by doctors, that such vaccines could cause autism. Other nations, through either poverty or poor planning, have let immunization levels slip, exposing their youngest members to a disease that aggressively attacks the immune system.

WHO warned in October of a devastating comeback in measles epidemics as the number of reported cases rose by 300% in the first three months of this year. Reported measles cases are the highest they have been in any year since 2006, WHO said.