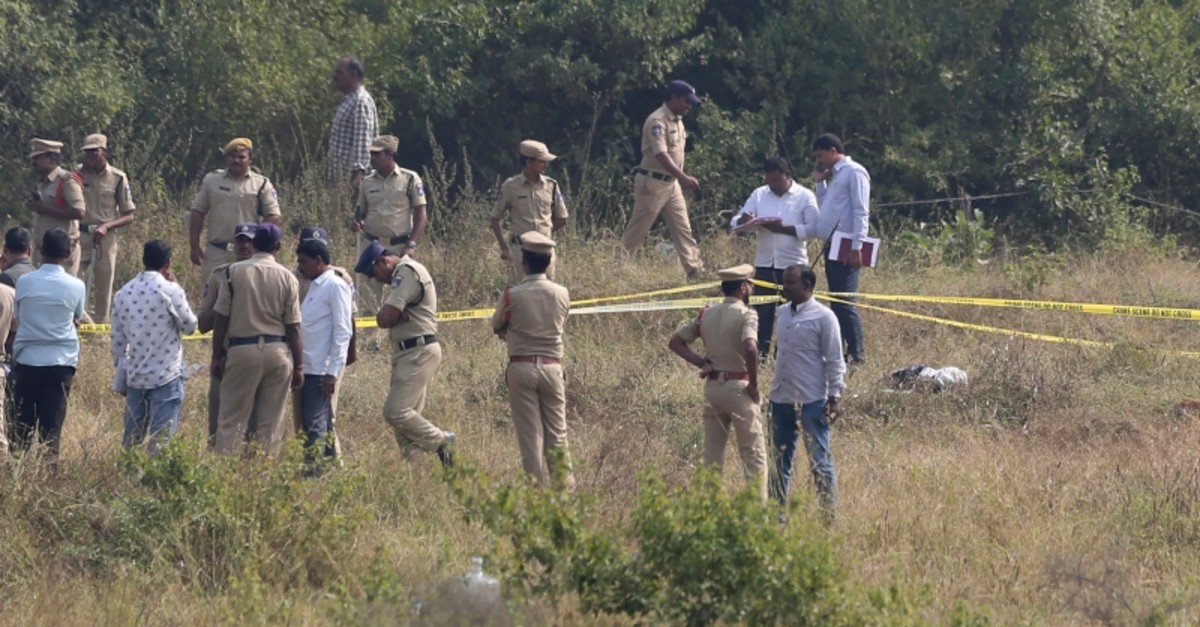 Indian police officials secure the area where four men suspected of raping and killing a woman were killed in Shadnagar some 50 kilometers from Hyderabad, India, Friday, Dec. 6, 2019. (AP Photo)
by Associated Press Dec 06, 2019 11:15 am
Indian police on Friday fatally shot and killed four men suspected of raping and killing a woman in southern India, leading some to celebrate their deaths as justice in a case that has sparked protests across the country.
The men, who were in police custody and had not been formally charged with any crime, were taken to the crime scenes, both where the rape and killing are suspected of taking place and the spot where the woman's body was burned about half a kilometer (a third of a mile) away, according to Shreedharan, an official in the police commissioner's office who uses one name.
Another police official said the suspects tried to grab an officer's firearm and escape. That officer spoke on condition of anonymity as he was not authorized to speak to the media.
The burned body of a 27-year-old woman was found last week by a passer-by in an underpass near Hyderabad after she went missing the previous night.
The high-profile case has sparked protests across India.
About 300 people gathered at the crime scene in Shadnagar, a town in the state of Telangana about an hour southwest of Hyderabad, to praise police for killing the suspects.
Some hugged officers and lifted them into the air chanting "long live police," while others showered them with flowers.
But in New Delhi, some observers condemned the police killing.
“This type of justice is counterfeit,” said Kavita Krishnan, secretary of the All India Progressive Women's Association.
"The killings are a ploy to shut down our demand of accountability from governments, judiciary and police, and dignity and justice for women. We demand a thorough investigation into this,” she said.
Maneka Gandhi, a lawmaker from India's ruling Bharatiya Janata Party and a former Cabinet minister, accused police of taking the law into their own hands.
"They would've been hanged by court anyway. If you're going to kill the accused before any due process of law has been followed, then what's the point of having courts, law and police?” she said.
Last Update: Dec 20, 2019 2:11 am
RELATED TOPICS