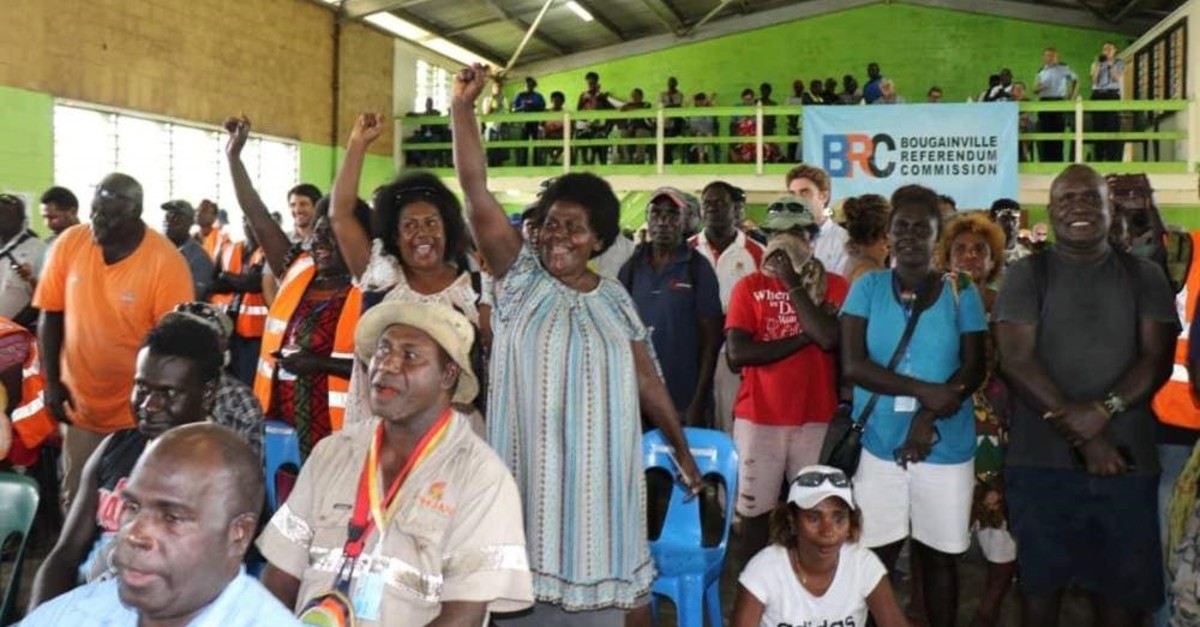 Members of the Bougainville Women's Federation cheer after results were announced in an independence referendum, Buka, Dec. 11, 2019, (AP Photo)
by Compiled from Wire Services Dec 11, 2019 4:44 pm

Voters backing Bougainville's independence from Papua New Guinea have won a landslide referendum victory, according to results released yesterday, a major step toward the troubled isles becoming the world's newest nation. Chairman of the Bougainville Referendum Commission Bertie Ahern declared 176,928 people, around 98% of voters, had backed independence with just 3,043 supporting the option of remaining part of Papua New Guinea with more autonomy. The announcement prompted loud cheers, applause and tears as dignitaries soon burst into song, with strains of the islands' anthem "My Bougainville" ringing out.

The referendum is nonbinding and independence would then need to be negotiated between leaders from Bougainville and Papua New Guinea. The final say would then go to lawmakers in the Papua New Guinea Parliament. The process of becoming a separate nation could take years to achieve.

Voting began on Nov. 23 with ecstatic residents, some festooned in grass garlands, forming makeshift choirs that stomped through the streets, waving independence flags, blowing bamboo pipes and chanting in chorus. The vote officially ended on Dec. 7 and according to the Bougainville Referendum Commission, it passed off without major incident.

The poll is part of a peace pact struck in the aftermath of a decade-long civil war between Bougainville's rebel fighters and Papua New Guinea forces, which ended in 1998. Many Bougainvilleans feel a closer cultural affinity to the nearby Solomon Islands, with a strong provincial identity that differs from the tribal factions of other regions of Papua New Guinea.