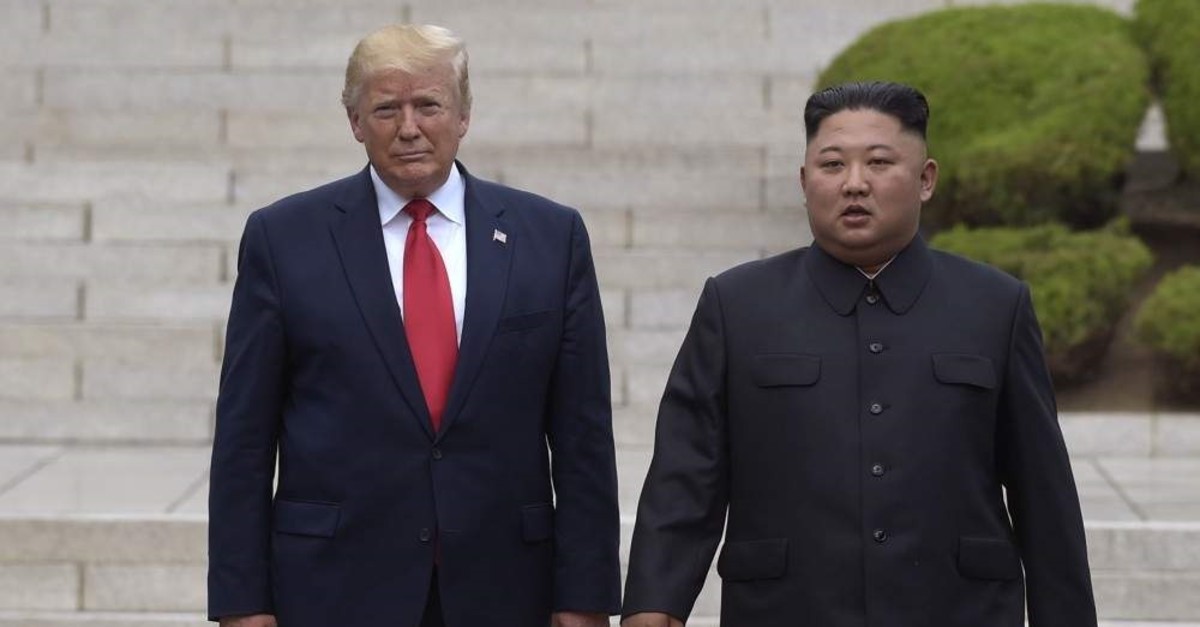 In this June 30, 2019, file photo, U.S. President Donald Trump meets with North Korean leader Kim Jong Un on the North Korean side of the border at Panmunjom village in the Demilitarized Zone. (AP Photo)
by Compiled from Wire Services Dec 12, 2019 5:45 pm

North Korea's foreign ministry on Thursday criticized the United States as "foolish" for convening a U.N. Security Council meeting over growing concern about short-range rockets fired from the isolated state. Pyongyang accused the U.S.of "hostile provocation” for their criticism of its ballistic missile tests and warned that the Trump administration may have blown its chance to salvage nuclear negotiations.

Washington on Wednesday used the meeting to warn of consequences for North Korea if it followed through with its promise of an ominous "Christmas gift" in the event that the U.S. does not come up with concessions by the end of the year.

U.S. Ambassador Kelly Craft said at this meeting that North Korea’s "deeply counterproductive” ballistic missile tests risk closing the door on prospects for negotiating peace but said the Trump administration is "prepared to be flexible” and take concrete, parallel steps toward an agreement on resuming talks. She appeared, however, to rule out meeting North Korea's demands for an offer in the final weeks of 2019: "Let me be clear: The United States and the Security Council have a goal – not a deadline."

"By arranging the meeting, the U.S. did a foolish thing which will boomerang on it, and decisively helped us make a definite decision on what way to choose," North Korea's foreign ministry spokesman said in a statement carried by the official KCNA news agency.

"The U.S. talks about dialogue whenever it opens its mouth, but it is too natural that the U.S. has nothing to present before us though dialogue may open,” the spokesman said.

He said North Korea’s tests are aimed at improving its self-defense and pointed out that the United States tests ICBMs freely. U.S. criticism of the North Korean tests demonstrate a "bandit-like” intent to disarm the North completely, he said.

North Korea said it has "nothing to lose anymore and we are ready to take a countermeasure corresponding to anything that the U.S. opts for."

Negotiations faltered after the United States rejected North Korean demands for broad sanctions relief in exchange for a partial surrender of the North’s nuclear capabilities at Kim’s second summit with U.S. President Donald Trump in Vietnam in February.

Trump and Kim met for a third time in June at the border between North and South Korea and agreed to resume talks. But an October working-level meeting in Sweden broke down over what the North Koreans described as the Americans’ "old stance and attitude.”

Kim, who unilaterally suspended nuclear and intercontinental ballistic missile tests last year while initiating diplomacy with Washington and Seoul, has said North Korea could seek a "new path” if the United States persists with sanctions and pressure against the North.

North Korea has conducted 13 rounds of ballistic missile and rocket artillery tests since May to pressure Washington and has hinted at lifting its moratorium on nuclear and long-range missile tests if the Trump administration fails to make substantial concessions before the new year.

The United States has continued to push for talks, but North Korea has said it is unwilling to continue rewarding Trump with meetings and summits he could chalk up as foreign policy wins unless it gets something substantial in return. There are doubts about whether Kim will ever voluntarily give away a nuclear arsenal he may see as his biggest guarantee of survival.

On Sunday, North Korea’s Academy of National Defense said a "very important test” was conducted at a long-range rocket facility on the country’s western coast, touching off speculation that the North could have tested a new rocket engine for either a satellite-launch vehicle or an intercontinental ballistic missile.

At the U.N., Craft said the United States wants to make "crystal clear” to North Korea that its continued ballistic missile tests "risk closing the door on this opportunity to find a better way for the future.”

She cited North Korean hints of "a resumption of serious provocations,” which she said would mean they could launch space vehicles using long-range ballistic missile technology or test ICBMs "which are designed to attack the continental United States with nuclear weapons.”

The United States trusts that North Korea "will turn away from further hostility and threats, and instead make a bold decision to engage with us,” she said. "If events prove otherwise, we, this Security Council, must all be prepared to act accordingly.”

North Korea didn’t speak at the meeting. But its key ally, China, urged the U.S. and North Korea to work together to keep tensions from escalating and suggested that the Security Council should consider easing sanctions against the North to help move the process forward.