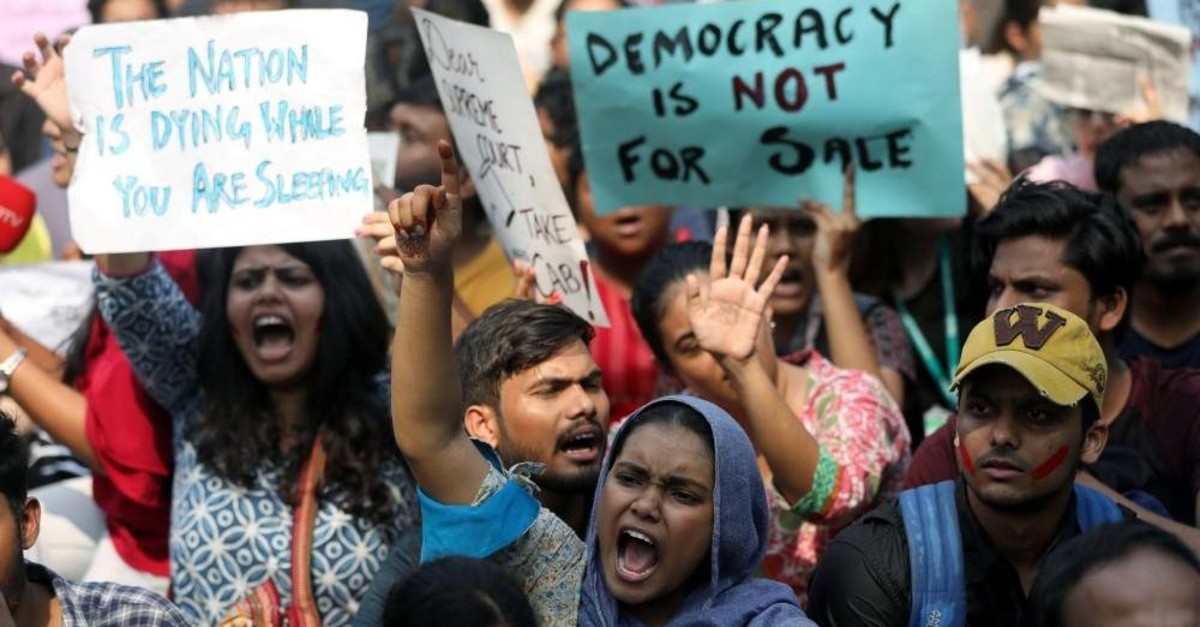 Protests over India’s new anti-Muslim citizenship law spread to student campuses on Monday as critics drew attention to police brutality during the protests across the country. Thousands of university students flooded the streets of India's capital, a southern state government led a march and demonstrators held a silent protest in the northeast yesterday to protest the new anti-Muslim law.

Students threw stones at police, who locked the gates of a college in the northern city of Lucknow to prevent them from taking to the streets. About two dozen students at another college in the city snuck out to protest.
Anger with Prime Minister Narendra Modi's government was fueled by allegations of police brutality at Jamia Millia Islamia University on Sunday when officers entered the campus in the capital New Delhi and fired tear gas to break up a protest. At least 100 people were wounded. There were similar scenes at Aligarh Muslim University in the northern state of Uttar Pradesh, where police also clashed with protesters.

The head of Jamia Millia demanded an investigation into how police were allowed to enter the campus. "It is not expected the police will enter the university and beat up students," Najma Akhtar told a news conference. Hundreds of people gathered outside the New Delhi police headquarters to protest against alleged police brutality and the detention of students. Police said they acted with restraint.

The Citizenship Amendment Bill (CAB) allows New Delhi to grant citizenship to illegal immigrants who entered India from three neighboring countries before 2015 – but not if they are Muslim. The bill was approved by President Ram Nath Kovind and the new law comes into effect with its publication in the government gazette last week. The bill’s passage follows a contentious citizenship registry exercise in Assam intended to identify legal residents and weed out those in the country illegally. In 2018, the Indian government excluded more than 4 million people from a draft list of citizens in the border state of Assam, mostly Bengali-speaking Muslims who could not produce valid documents. The move created fear among Muslims who believe that their fundamental rights as Indian citizens are under risk.

The law’s passage has triggered protests across India, but Assam, the center of a decades-old movement against illegal immigrants, has seen the highest toll. Assam police officials say officers have fatally shot five protesters in the state capital of Gauhati while attempting to restore order to a city that has been engulfed in demonstrations since last week.
About 1,500 people have been arrested for violence including arson and vandalism, police spokesman G.P. Singh said, adding that authorities were reviewing surveillance videos and anticipated making more arrests. Schools remain closed through Dec. 22, the government has blocked internet service statewide and a curfew has been imposed from 9 p.m. to 6 a.m. Foreign journalists are not permitted to travel to India's northeastern region, including Assam, without a permit.