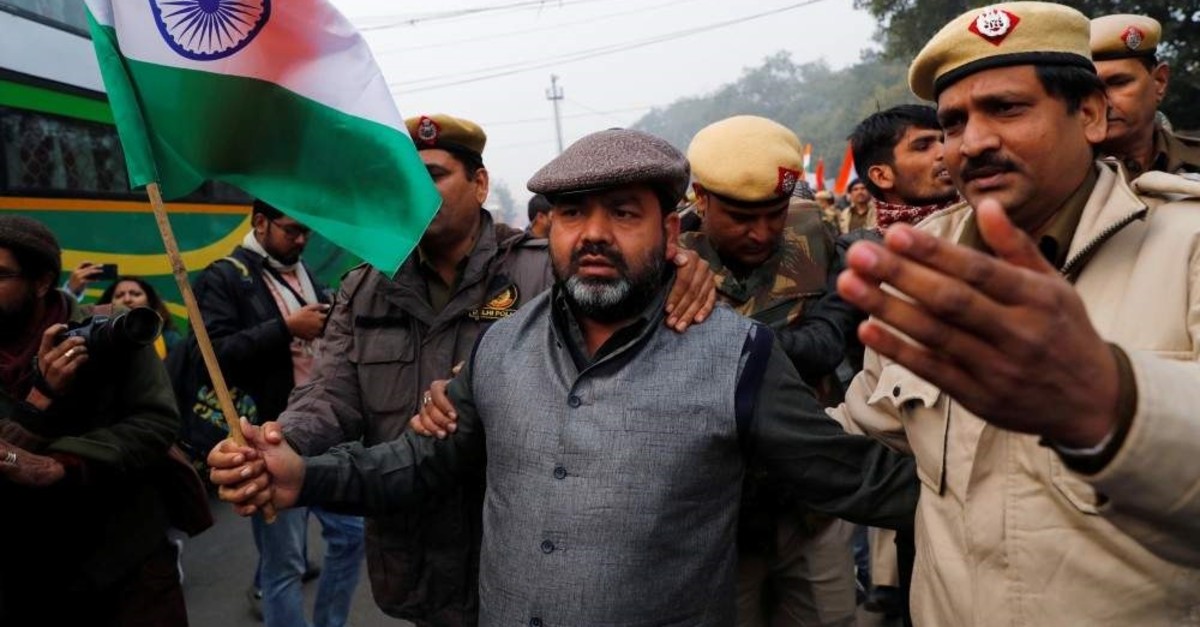 Police detained more than 100 protesters in key Indian cities Thursday as they defied a ban on protests that authorities hope will stop widespread demonstrations against a new anti-Muslim citizenship law.

Authorities denied protesters march permits in some large cities, including the capital New Delhi and Chennai, where protest organizers have planned major rallies on Thursday.

Bans on large gatherings have also been put in place in Uttar Pradesh State and in some parts of Karnataka state, including the city of Bangalore. In Uttar Pradesh, a police order prohibits more than four people from gathering together, allegedly imposed to avoid violence.

However, demonstrations are expected to continue as planned in Uttar Pradesh, New Delhi, Bangalore and Mumbai, as civil society groups, students and ordinary citizens turned to social media to ask people to join the peaceful protests.
Historian Ramchandra Guha, a biographer of India's independence leader Mohandas Gandhi, was among those detained in Bangalore, the capital of southern Karnataka state.
When reached by the phone, Guha said he was on a bus with other detainees and did not know where the police were taking them.
In New Delhi, Yogendra Yadav, the chief of the Swaraj India party, was among those detained as protesters said they would go ahead with a demonstration at New Delhi's iconic Red Fort and surrounding historic district.
Officials said more than 100 people were detained at the fort, Police could be seen dragging women protesters to a staging area behind the fort.
The protesters were loaded into buses and other vehicles. It was not clear where they were taken by the police.
The main roads leading to the fort were blocked by the police and they were not letting pedestrians go to nearby temples or shopping areas.
Internet service was blocked around the fort and in some other parts of New Delhi, a tactic authorities are known to use in other parts of the country, such as disputed Kashmir, to try to stop protests from being organized. Such tactics are rare for the capital.
India mobile carrier Vodafone Idea said Thursday the company had suspended internet services in some parts of the capital to comply with a government order.
"As per the directive received from the Government, data services are stopped at a few locations," Vodafone Idea's customer care tweeted in response to a user's question about its network in Delhi.
SMS services have also been suspended at a few locations, the company's customer care separately told another Twitter user.
Rival Bharti Airtel's customer care also told customers on Twitter it had suspended voice calls, SMS and internet services in parts of the Indian capital.

Critics say it is further proof that Modi, emboldened by a resounding election victory this year, is moving quickly to reshape India as a Hindu nation and weaken its secular foundations.

During the past week of unrest, hundreds of people have been arrested, and authorities have cut the internet in some flashpoint areas.

Police have fired tear gas into crowds and been accused of beating protesters, including women and students, fueling the anger.

A crowd of mostly young people rallied outside Delhi's Jamia Millia Islamia University on Wednesday to protest, defying the ban on large gatherings.

"We are really very angry with the BJP government... they have taken racism to the extreme point," Taiba Hadis, 18, told AFP at the rally.

"They are questioning our existence, and it is high time for us to speak up."

In the financial capital of Mumbai, hundreds of people rallied on Wednesday carrying placards with the words: "India is Ours" and chanting "We Are All One."

"We just cannot go along with this bill. I can't believe we now have to prove our citizenship after living in India for so many years," Tabeer Rizvi told AFP as the Mumbai crowd burst into a Hindi version of the U.S. civil rights movement anthem: "We shall overcome."

"I am not surprised to see people of all religions come out to protest this bill,” he said.

Rallies were also held in other states including West Bengal, Tamil Nadu and Telangana on Wednesday.

The U.N. secretary-general's spokesman Stephane Dujarric said Tuesday the global body was "concerned about the violence and alleged use of excessive force by security forces that we've seen that have been taking place."

The U.S. State Department this week urged New Delhi to "protect the rights of its religious minorities in keeping with India's constitution and democratic values."