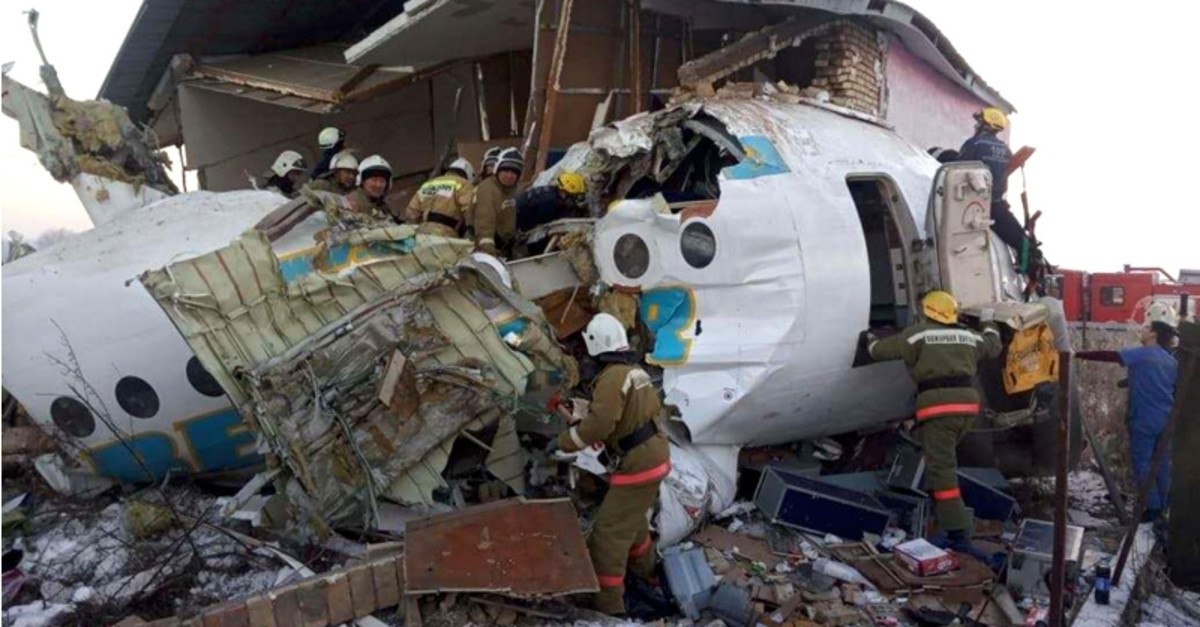 police and rescuers work on the side of a plane crash near Almaty International Airport, outside Almaty, Kazakhstan, Friday, Dec. 27, 2019. (Emergency Situations Ministry of the Republic of Kazakhstan photo via AP)
by Dec 27, 2019 7:56 am

Twelve people died when a plane carrying 100 passengers and crew crashed shortly after takeoff from Kazakhstan's largest city on Friday and slammed into a house, but many on board survived. A video released by the Central Asian country's emergencies committee showed the 23-year-old plane operated by budget carrier Bek Air torn into pieces with its nose crushed into a collapsed house, as rescue crews worked to pull people from the wreckage. The aircraft disappeared from the radar minutes after it took off from Almaty airport at 7:05 a.m. on its way to the capital Nur-Sultan with 95 passengers and five crew members, the airport authority said in a statement. It hit a concrete barrier and then slammed into a two-storey building near the city's boundary northeast of the airport.

Kazakh President Kassym-Jomart Tokayev took to Twitter to express his condolences, and said he had formed a government commission and that all those responsible would be severely punished in accordance with the law. Saturday would be a day of national mourning, Tokayev said, according to Kazinform. The cause of the crash in the Central Asian nation was unclear, but authorities were looking at two possible scenarios; pilot error and technical failure, Kazakhstan's Deputy Prime Minister Roman Sklyar said.

Turkey conveyed condolences to Kazakhstan, saying that “we are sharing the sorrow of brotherly Kazakshtan, wishing God’s mercy to those who lost their lives, condolences to their families and patience, and urgent recovery for the wounded,” in a statement released by the Turkish Foreign Ministry.

Kazakhstan responded to the crash by grounding the Fokker model, which makes up the whole of the Bek Air fleet, and launched an investigation. The plane was 23 years old but had passed safety checks in May, Kazakh authorities said. The industry ministry said in a statement that the Fokker 100 model, which is no longer manufactured, would be grounded until the cause of the accident became clear.

Bek Air describes itself on its website as Kazakhstan's first low-cost airline. In March 2016, a Bek Air Fokker 100 plane with 116 passengers made an emergency landing in the Kazakh capital after its landing gear failed to deploy but no one was injured. Swiss regional carrier Helvetic Airways phased out its Dutch-built Fokker-100s earlier this year after 15 years of service.

Kazakhstan's air safety record is far from spotless. In 2009, all Kazakh airlines, with the exception of the flagship carrier Air Astana, were banned from operating in the European Union because they didn't meet international safety standards. The ban was lifted only in 2016.