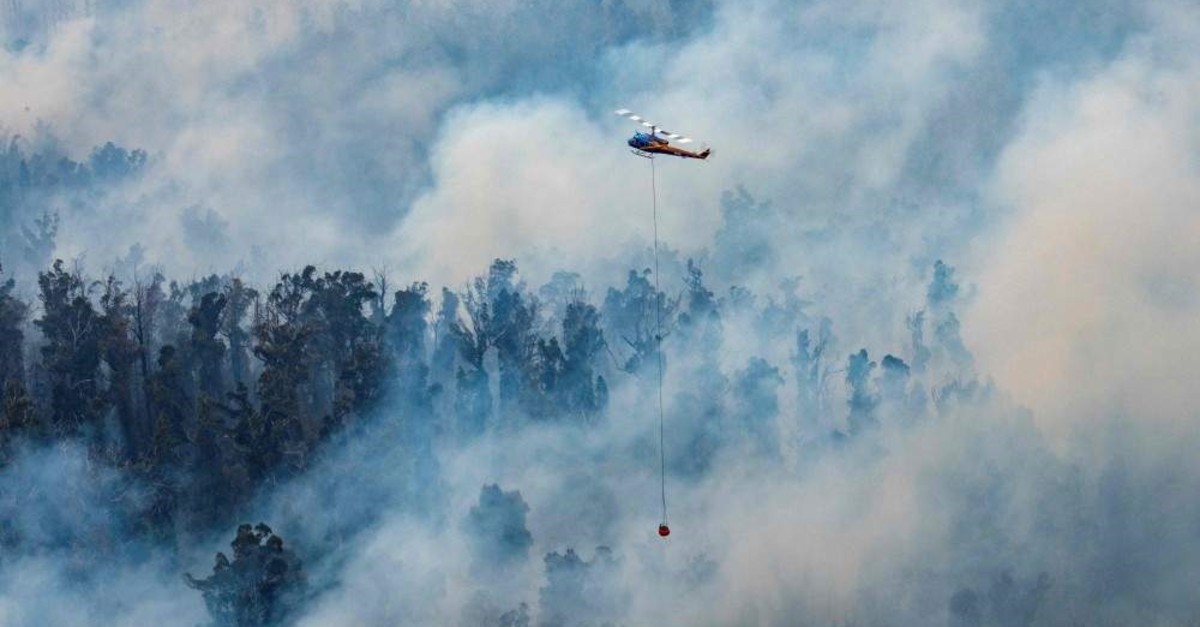 This Dec. 29, 2019, handout photo shows a helicopter dumping water on a fire in Victoria's East Gippsland region. (Victoria's Department of Environment, Land, Water and Planning via AFP)
by Compiled from Wire Services Dec 30, 2019 9:02 am

Tourists and firefighters were forced to flee vast fires burning in southeastern Australia on Monday, as a heatwave rekindled devastating bush blazes across the country.

Authorities said "quite a number" of the 30,000 tourists visiting the usually picturesque southeast tip of the continent had heeded calls to evacuate.

More than a dozen blazes are raging in the East Gippsland countryside, some so intensely that hundreds of firefighters were pulled back beyond a firefront estimated to stretch 1,000 kilometers (600 miles).

It was deemed "unsafe" for them to remain in bushland areas, Gippsland fire incident controller Ben Rankin said.

It is the latest emergency in Australia's devastating summer fire season, which has been turbocharged by a prolonged drought and climate change.

Ten people have been killed, more than 1,000 homes destroyed and more than three million hectares (7.4 million acres) — an area bigger than Belgium — have been scorched.

Conditions worsened on Friday with high winds and temperatures soaring across the country — reaching 47 degrees Celsius (116 Fahrenheit) in Western Australia, but topping 40 degrees in every region — including the usually temperate island of Tasmania.

The situation was "very intense" said Rankin, warning that conditions would worsen later in the day before temperatures drop markedly overnight.

'Too late to leave'

Authorities had warned tourists enjoying Australia's summer holidays in East Gippsland that the fires would cut off the last major road still open.

Victoria Emergency Management commissioner Andrew Crisp said residents and holidaymakers still in the area faced being stranded as it was now "too late to leave", with his agency warning it was "not possible" to provide aid to all visitors in the area.

The Country Fire Service's Brenton Eden said it would be a "very dangerous" day for people in the state, with "dry" thunderstorms — which produce thunder and lightning but no rain — already sparking a number of fires including an emergency-level blaze on Kangaroo Island.

"Winds are gusting and unfortunately this is a dry lightning front that is going to move rapidly across South Australia," he told national broadcaster ABC.

Conditions were also expected to deteriorate in worst-hit New South Wales, where 100 fires were burning Monday morning including more than 40 uncontained.

Sydney and other major cities have been shrouded in toxic bushfire smoke haze for weeks, forcing children to play indoors and causing professional sporting events to be cancelled.

The capital Canberra has cancelled its New Year's Eve fireworks display due to a total fire ban in the Australia Capital Territory, while several regional towns have also followed suit.

A petition to cancel Sydney's famous New Year's Eve fireworks and use the money to fight bushfires ringing the city has topped 270,000 signatures, but officials say the show will go on.

Sydney has spent 6.5 million Australian dollars ($4.5 million) on this year's fireworks display — funds that the Change.org petition argues would be better spent on supporting volunteer firefighters and farmers suffering through a brutal drought.

The crisis has focused attention on climate change — which scientists say is creating a longer and more intense bushfire season — and sparked street protests calling for immediate action to tackle global warming.

While conservative Prime Minister Scott Morrison belatedly acknowledged a link between the fires and climate change, he has continued his staunch support of Australia's lucrative coal mining industry and ruled out further action to reduce emissions.

New Year's Eve fireworks in Australia's capital city have been canceled as the wildfire danger worsens in oppressive summer heat, and pressure was building Monday for Sydney's iconic celebrations to be similarly scrapped.

There were 97 fires burning across New South Wales on Monday with 43 of them not yet contained. Total fire bans have been declared in 10 areas, including Sydney.

The City of Sydney Council has approved Tuesday's fireworks show, although fire authorities warned it could be canceled if catastrophic wildfire conditions are declared.

Australia Prime Minister Scott Morrison on Sunday said the fireworks should go ahead to show the world Australia's resiliency.

New South Wales Deputy Premier John Barilaro said the spectacle should be called off. "The risk is too high and we must respect our exhausted volunteers," he wrote on social media.

In Canberra, fireworks were canceled and event organizers said other activities, including live music performances, could also be canceled.

"It is a sensible decision for us not to proceed with the fireworks," the capital territory's Emergency Services Agency Commissioner Georgeina Whelan said.