Protests continue as over 100,000 march in southern India against anti-Muslim law 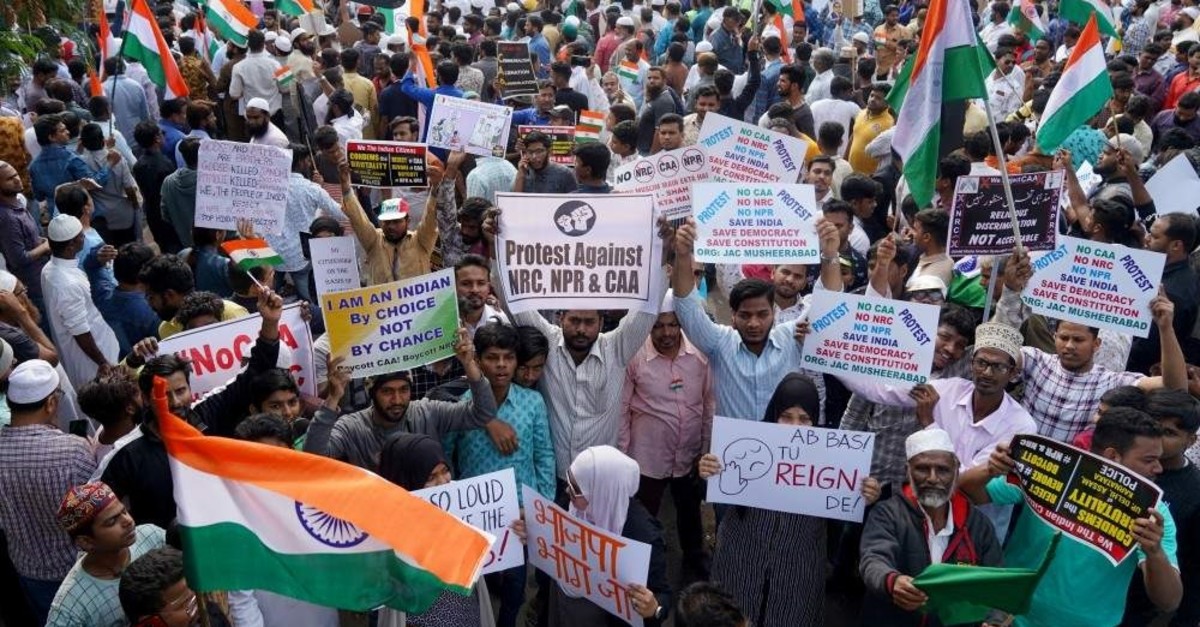 Demonstrators hold placards and flags as they attend a protest rally against a new citizenship law, in Hyderabad, India, Jan. 4, 2020. (Reuters Photo)
by reuters Jan 04, 2020 8:23 pm

The protest, dubbed the "Million March," was organized by an umbrella group of Muslim and civil society organizations. More than 40% of Hyderabad's estimated population of nearly 7 million are Muslims.

Demonstrators were still pouring into the protest site late Saturday afternoon, according to a Reuters witness, despite police saying no march would be allowed and that permission had only been granted for a 1,000-person gathering.

The Indian government has faced weeks of acrimonious and, at times, violent protests against the Citizenship Amendment Act (CAA), which was passed by Modi's government in December.

The Hyderabad protesters held placards with slogans including "Withdraw CAA immediately," and "India's only religion in Secularism."

The Reuters witness said the protest remained peaceful and estimated that more than 100,000 people were in attendance.

The new law eases the path for non-Muslim minorities from the neighboring Muslim-majority nations of Afghanistan, Bangladesh and Pakistan to gain Indian citizenship. But, if combined with a proposed national register of citizens, critics of the CAA fear it will discriminate against minority Muslims in India and chip away at India's secular constitution.

Modi's government maintains the new law is necessary to help minorities facing persecution in Muslim-majority nations, and it has called the pan-India protests politically motivated.

At least 25 people have been killed in protest-related clashes with police since early December.

Elsewhere, protests against the CAA also went ahead in several other Indian cities Saturday with hundreds turning out for protests in cities in the southern state of Karnataka.

Hundreds of men and women gathered at a rally in the tech hub of Bengaluru, with some accusing Modi's government of trying to divide India along communal lines, to distract from a sharp domestic economic slowdown and job losses.