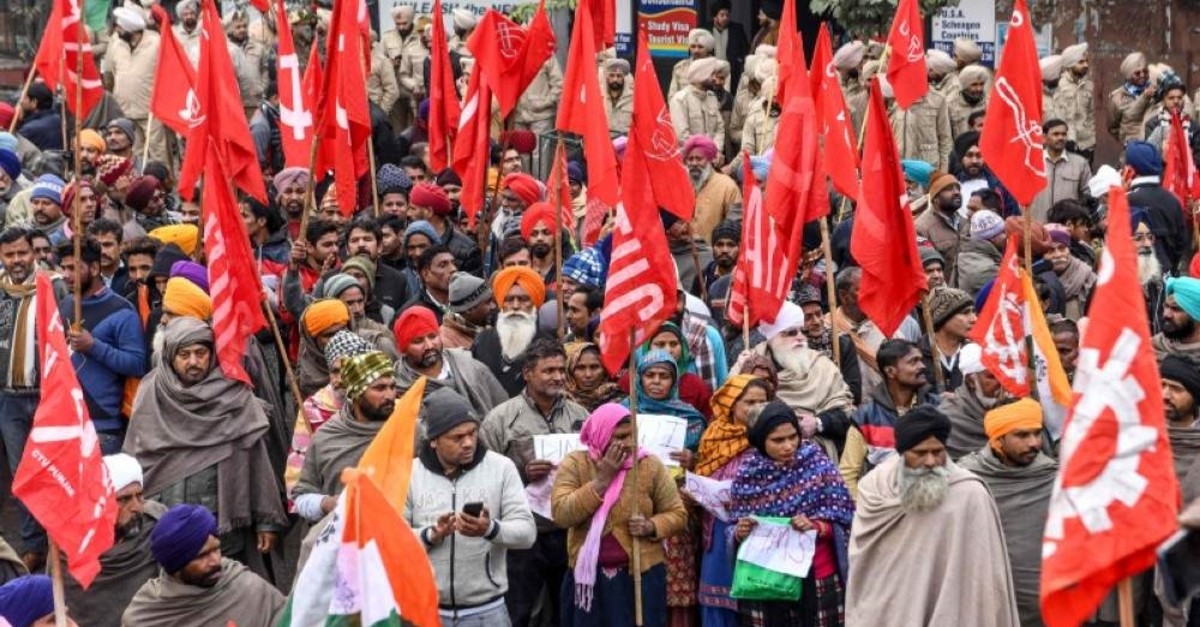 Banking and other businesses across India suffered Wednesday as millions of workers went on strike protesting the Hindu nationalist government's economic policies, especially the planned sale of several state-owned companies including Air India.

The widespread action was in opposition to what unions called the "anti-worker and anti-people policies" of right-wing Prime Minister Narendra Modi. Protesters marched on the streets of New Delhi and several state capitals in response to the strike call given by 10 workers unions. They highlighted the recent privatization of public firms and natural resources and demanded a raise in the minimum wage and pensions.

Farmers and students joined some of the protests called by 10 trade unions who claim 250 million members between them.

Bus and train services and state-owned banks bore the brunt of the national strike action that was staged in defiance of government warnings of "consequences" for anyone who took part. Some workers at state oil and coal firms joined the strike.

West Bengal was the worst hit, with police firing live rounds in the air to break up protesters who set fire to police vehicles and threw rocks at security forces in Malda district, north of the capital Kolkata, a senior police officer told AFP. They also fired tear gas and baton-charged other protests in the eastern state, where many roads and railway lines were blocked. Police said more than 150 arrests were made.

The eastern states of Bihar and Odisha, Maharashtra in the west, Haryana in the north and Kerala and Karnataka in the south were also hit by the action.

Amarjeet Kaur, a trade union leader, said workers were opposed to the proposed sale of natural resources and state assets.

"The working class is on roads today,'' she said in remarks carried by The Associated Press, adding that the 90-100% of the workers had joined the strike in the defense, coal, petroleum, income-tax and service sectors in 15 to 16 Indian states.

Those at rallies also chanted slogans against the government's new nationality law that opponents say is anti-Muslim and has sparked widespread demonstrations. More than 25 people have been killed in the protests since Dec. 11. Growing unrest in universities has added to social tensions.

"The attitude of the government is that of contempt toward labor," said the Centre of Indian Trade Unions, one of the groups organizing Wednesday's 24-hour strike.

Opposition parties have backed the strikers. Rahul Gandhi, former leader of the main opposition Congress party said the government had "created catastrophic unemployment" in a Twitter message praising the action.

The unions said that hundreds of thousands of workers will lose jobs if the government went ahead with the sale of Air India, Bharat Petroleum Corporation, the Shipping Corporation of India and the Container Corporation of India. The government says it plans to sell the companies because they had been losing money for years. It also wants to bolster revenues as it prepares to unveil the federal budget on Feb. 1 for the financial year 2020-21. The federal government warned the workers that they won't receive salaries for Wednesday if they went on strike.

The government projected a 5% economic growth in the current fiscal year, April 2019 to March this year, sharply down from last year's 6.8% with the manufacturing, cement and power sectors faring poorly. Also, the sale of cars and other vehicles dipped by nearly 13% in mid-2019.

Prime Minister Narendra Modi's government recently recapitalized the banks and offered tax incentives for domestic companies. But these steps have so far not increased the rate of investment, according to data released by the government's National Statistical Office. In May last year, government data had shown that joblessness in the country was 6.1% of the total labor force during 2017-18, the highest in 45 years.