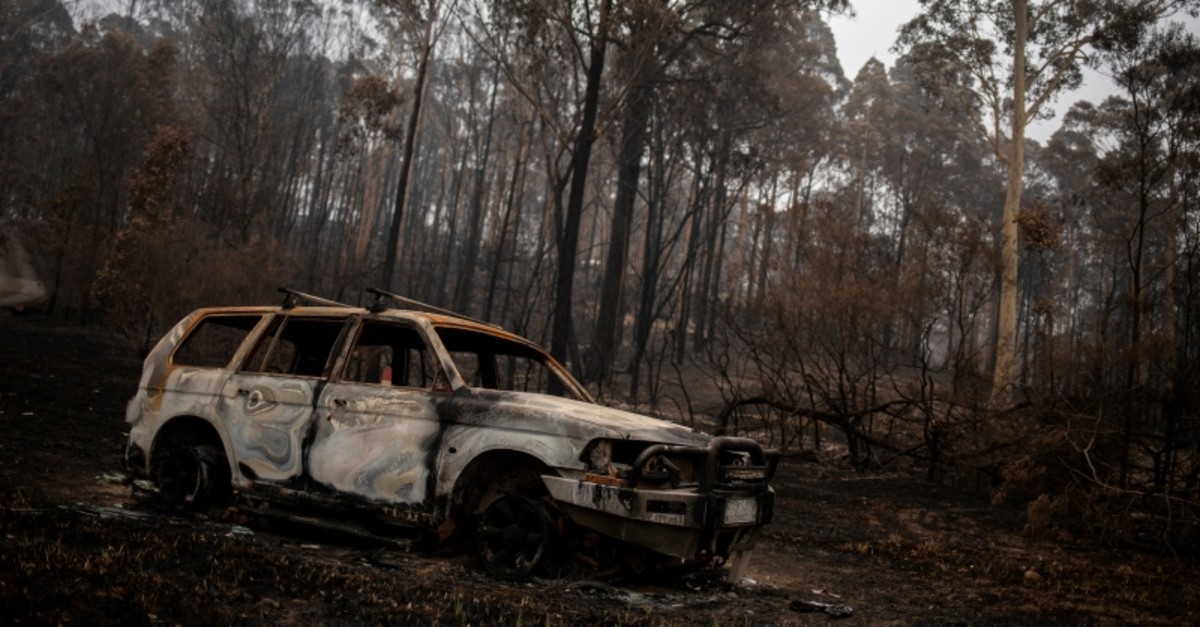 Residents in the path of wildfires razing southeast Australia were urged to evacuate Thursday if they do not intend to defend their homes as hot and windy conditions are forecast to escalate the danger over the next two days.

The Rural Fire Service in New South Wales state has told fire-weary community meetings south of Sydney in the coastal towns of Nowra, Narooma and Batemans Bay that northwesterly winds were likely to once again drive blazes toward the coast. Vacationers have retreated to beaches and into the ocean in the area in recent weeks as destructive fires and choking smoke have encroached on the tourist towns, scorching sand dunes in some places.

"We can't guarantee your safety and we don't want to be putting emergency services – whether it be volunteers or paid staff – we do not want to put them in harm's way because people didn't follow the advice that was given," Victoria Premier Daniel Andrews said.

Temperatures in the threatened area were expected to reach into the mid-40 degrees Celsius Friday, and conditions remained tinder dry.

"If you can get out, you should get out," said Andrew Crisp, Victoria's emergency management commissioner. "Because tomorrow is going to be a dangerous and dynamic day."

The unprecedented fire crisis in southeast Australia that has claimed at least 26 lives since September, destroyed more than 2,000 homes and scorched an area twice the size of the U.S. state of Maryland has focused many Australians on how the nation adapts to climate change.

Prime Minister Scott Morrison has come under withering criticism both at home and abroad for downplaying the need for his government to address climate change, which experts say helps supercharge the blazes.

Last year was Australia's hottest and driest on record. The Bureau of Meteorology's head of climate monitoring, Karl Braganza, said while the country's rainfall was expected to pick up a bit, it wouldn't be enough to snuff out the blazes anytime soon.

"Unfortunately, we're not looking at widespread, above-average rainfalls at this stage," he said. "That's really what we need to put the fires out fairly quickly. It is going to be a campaign, in terms of the fires. We are not looking at a short and sharp end to the event – it looks like something that we will have to persist with for some time."

Along the main roadway in southern New South Wales, forests of evergreen eucalyptus trees have taken on a ghostly autumnal appearance, with golden leaves and blackened trunks. The forests appear devoid of any wildlife. Outside, it often smells like a campfire that has been recently snuffed out, and hazy waves of smoke drift past.

In many small towns, most homes appear untouched apart from one or two that have been razed to the ground, sometimes with only a chimney stack still standing. People have hung signs and banners thanking the volunteer firefighters they call "firies." Some cars are nothing more than burned-out chassis and wooden power poles that have been reduced to stumps. Not far from the communities, smoke can be seen rising from hills where the wildfires continue to rage.

Morrison has faced fierce backlash over what many Australians perceive as a slow, detached response to the wildfire crisis. On Thursday, he found himself on the defensive again over an awkward exchange he had with locals on fire-ravaged Kangaroo Island. In a video of his visit to the island, where an outback safari operator and his son were killed in the blazes, Morrison was seen telling locals, "Thankfully, we've had no loss of life."

After he was corrected, he continued, "Yes, two, that's quite right. I was thinking about firefighters, firstly."

It was the latest in a string of gaffes for Morrison, who created a public uproar when he took a family vacation to Hawaii in the middle of the disaster. He has tried to strike a more compassionate image since, and earlier this week promised the government would commit an extra Australian dollar $2 billion toward the fire recovery effort.

"Tomorrow's going to be a very difficult day in the eastern states," Morrison said during a news conference Thursday. "Once again, I express my sincere condolences and sympathies to the families of all of those who have lost loved ones during this terrible disaster. We will continue to remember them, but also their families in particular in what they need, in supporting them."

The New South Wales government responded to the crisis Thursday by announcing an additional AU$1 billion to be spent over the next two years on wildfire management and recovery.

The Australian disaster is seen by many as a harbinger for other countries of the future consequences of global warming.

Pope Francis has joined world leaders in expressing solidarity with the Australian people.

"I'd like to ask for you all to pray to the Lord to help the (Australian) people at this difficult moment, with these powerful fires. I'm close to the Australian people," Francis said at the end of his general audience Wednesday, drawing applause from congregants.

The smoke has also traveled more than 12,000 kilometers to Brazil and Argentina, according to weather authorities there.

Australia experienced its driest and hottest year on record in 2019, with its highest average maximum temperature of 41.9 degrees Celsius recorded in mid-December.