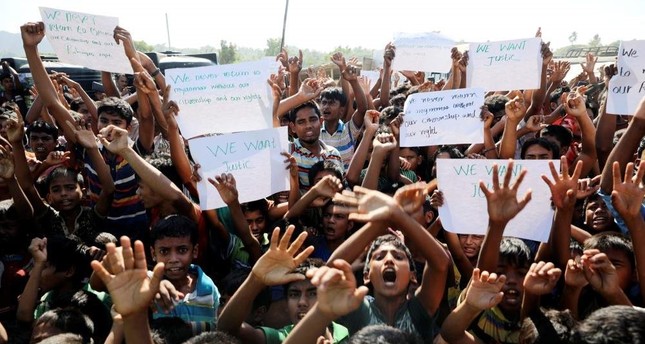 Rohingya refugees who fled persecution and violence in Myanmar are praying for justice as the International Court of Justice (ICJ) in The Hague will deliver an initial verdict Thursday in a genocide case filed against Myanmar.

The ruling came a month after Myanmar's civilian leader and Nobel Peace Prize laureate Aung San Suu Kyi traveled to The Hague to defend the bloody 2017 crackdown by her nation's army against the Rohingya.

The Muslim majority African nation of The Gambia brought the case against Myanmar at the International Court of Justice after around 740,000 Rohingya fled over the border into Bangladesh, carrying accounts of widespread rape, arson and mass killings. Rohingya, described by the U.N. as one of the most persecuted communities in the world, has been facing systematic state persecution in the northern Rakhine state of Myanmar since the early 1970s. At the world's largest refugee camp in Bangladesh, where the Rohingya who fled are settled, many hope for a ruling in their favor after years of persecution.

If the court rules in The Gambia's favor, this would be just the first step in a case likely to take years.

The ICJ's ruling came after a Myanmar government-backed commission report that denied there was any genocide of the persecuted community.

In a statement, Europe-based Free Rohingya Coalition (FRC) slammed the findings of Myanmar's Independent Commission of Enquiry that there is "no" or "insufficient" evidence to establish the genocidal intent behind Myanmar's destruction of the Rohingya community.

Share on Facebook Share on Twitter
Previous in Asia Pacific India's top court declined calls to suspend the implementation of... Next in Asia Pacific A new deadly virus, which has killed at least nine people so far,...
DAILY SABAH RECOMMENDS