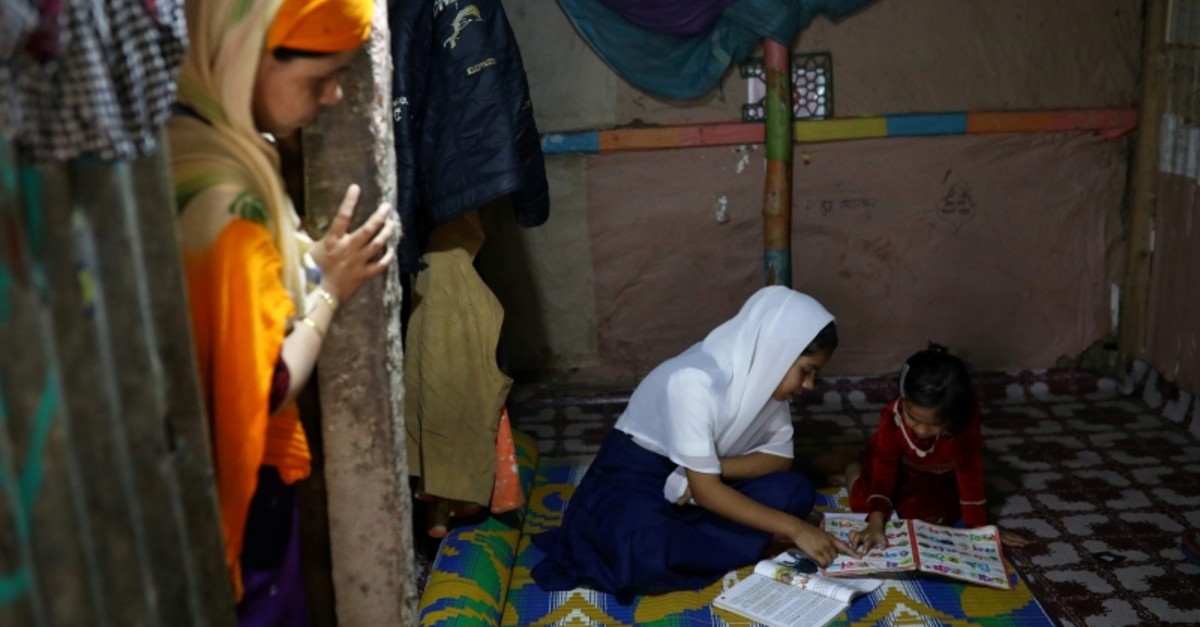 Yasmin, a girl who was expelled from Leda High School for being a Rohingya, helps her younger sister to study in Leda camp in Teknaf, Bangladesh, March 5, 2019. (Reuters Photo)
by Compiled from Wire Services Jan 30, 2020 11:09 am

Rohingya refugees reacted with surprise and joy Wednesday to news that Bangladesh would provide formal education for their children, two and a half years after they were forced to flee Myanmar.

Authorities in Bangladesh in partnership with the United Nations will expand educational programs for hundreds of thousands of Muslim Rohingya children living in refugee camps who are currently receiving only basic lessons.

The children, who fled with their families from neighboring Myanmar to camps in Bangladesh's Cox's Bazar district, now attend about 1,500 learning centers run by UNICEF that provide basic education, drawing and other fun activities. Under the new program starting in April, they will receive a formal education using a Myanmar curriculum for grades 6 to 9, the U.N. said in a statement.

"Oh my god! Bangladesh is letting us be educated!" Mohammed Zobayer, who works as a teacher in one of the learning centers, said after learning about the decision. "I'm so excited. This is so good. I can't express my happiness."

Zobayer, 19, noted that most of the refugee children have already lost two academic years.

"Now they can chase their dreams. It is like having a new life," he added.

Mahbub Alam Talukder, Bangladesh's refugee, relief and repatriation commissioner, said the government agreed in principle with a proposal from the U.N. that the Rohingya children should be provided with a Myanmar education.

"They will be taught in Myanmar's language, they will follow Myanmar's curriculum; there is no chance to study in formal Bangladeshi schools or to read books in the Bengali language," he said by phone. "There's no scope for them to stay here in Bangladesh for long, so through this approach, they will be able to adapt to Myanmar's society when they go back."

The U.N. said initially 10,000 Rohingya children will be enrolled in a pilot program using the Myanmar curriculum, which will allow them to fit into the Buddhist-majority nation's national educational system when they return to their homeland.

Mostafa Mohammad Sazzad Hossain, a spokesman for the United Nations High Commissioner for Refugees in Dhaka, said a teacher training program is being developed.

"Individuals with appropriate academic qualification and experience will be recruited from both Rohingya and Bangladeshi communities and trained as teachers," he said in an email.

The decision to introduce formal education was hailed by human rights groups, and the U.N.

Rights groups have long campaigned for the effectively stateless Rohingya children in Bangladesh's refugee camps to be allowed access to quality education, warning of the costs of a "lost generation."

Bangladesh has not recognized the vast majority of the refugees and does not issue birth certificates for those born in the camps, making their legal status unclear. Last year it expelled scores of them from local schools, saying that they were using fake Bangladeshi identity cards.

"We believe this is a positive step and a clear indication of the commitment by the government of Bangladesh to ensure access to learning for Rohingya children and adolescents, as well as to equip them with the right skills and capacities for their future and return to Myanmar when the conditions allow," the U.N. said.

About 400,000 Rohingya children currently live in refugee camps, and global rights groups have been demanding that the Bangladesh government allow them to have a formal education.

More than 700,000 Rohingya have fled from Myanmar to Bangladesh since August 2017, when Myanmar's military launched what it called "clearance operations" in Rakhine state in response to an attack by an insurgent group. Security forces have been accused of committing mass rapes and killings and burning thousands of homes. In total, more than a million Rohingya refugees currently live in Bangladesh.

Myanmar's government has long considered the Rohingya to be migrants from Bangladesh, even though their families have lived in Myanmar for generations. Nearly all have been denied citizenship since 1982, effectively rendering them stateless. They are also denied freedom of movement and other basic rights including education.