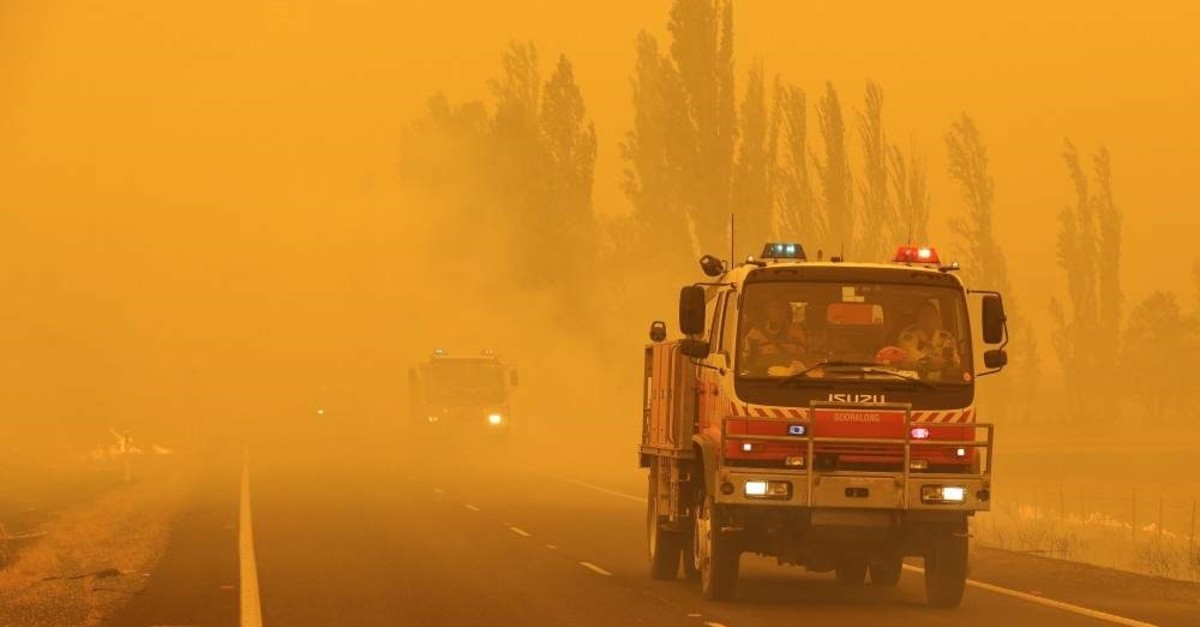 Fire burns in the grass along the road as firetrucks pass by near Bumbalong, south of the Australian capital, Canberra, Saturday, Feb. 1, 2020. (AP Photo)
by Compiled from Wire Services Feb 01, 2020 1:20 pm

Wildfires burned out of control near Australia's national capital, Canberra, and across the surrounding New South Wales state on Saturday, with endangered residents warned to prepare to evacuate.

The capital region declared a state of emergency on Friday because of a fire that by Saturday covered 35,800 hectares (88,500 acres) of forest and farmland south of Canberra, Australian Capital Territory Emergency Services Agency Commissioner Georgeina Whelan said.

Spot fires were sparked by embers carried on winds up to 10 kilometers (6 miles) from the fire front, and some of those fires will eventually merge with the main fire, she said.

The fires threaten Canberra's southern suburbs and the nearby village of Tharwa, which has been cut off by road closures since Saturday morning.

"The fire may pose a threat to lives directly in its path," Whelan told reporters in Canberra. "Driving is extremely dangerous and potentially deadly."

The fire was downgraded from the emergency level late Saturday to the second level on a three-tier scale of danger due to a fall in temperatures and winds. But several fires continued to burn at emergency levels in southeast New South Wales.

New South Wales Rural Fire Commissioner Shane Fitzsimmons said sheds and stables had been destroyed but no homes had been reported lost to wildfires on Saturday.

That temperature was also the third-highest recorded in the city in any month, Kapikian said.

The new record along with all-time highs in January and December make the 2019-2020 summer the hottest on record, he said.

Australia's Bureau of Meteorology did not immediately confirm the records.

The continuing state of emergency is the first in the Australian Capital Territory since 2003 when wildfires killed four people and destroyed almost 500 homes in a single day.

Fires across southern Australia have claimed at least 33 lives since September, destroyed more than 3,000 homes and razed more than 10.6 million hectares (26.2 million acres).