10 passengers test positive for coronavirus on cruise ship off Japan 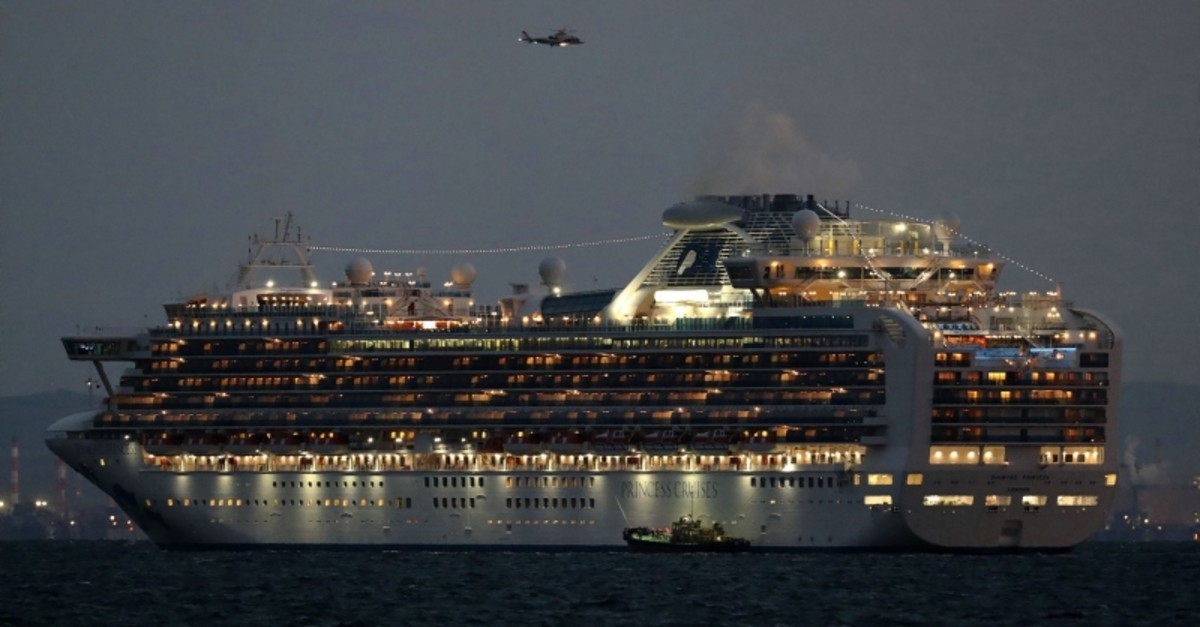 Around 3,700 people have been quarantined away for at least two weeks on a cruise liner anchored off Japan after health officials confirmed Wednesday that 10 people on the ship had tested positive for coronavirus and more cases were possible.

While the infected patients were transferred by Japan's coast guard to hospitals on the mainland, the remainder of the passengers and crew on board the Carnival Corp ship were placed in quarantine and given health screenings. Only 31 results of 273 tests have been received so far, revealing the 10 confirmed cases.

The quarantine decision meant that passengers on Carnival's Diamond Princess, which had arrived in Yokohama on Monday after a 14-day round trip, will now spend another two weeks on the ship off Yokohama port near Tokyo.

Passengers on the ship took to social media to detail their predicament, posting photos of officials in masks and gowns conducting health checks, room service meals, empty corridors and a barren deck.

British passenger David Abel said all passengers were confined to their cabins on Wednesday morning, with staff delivering food room-by-room.

"The challenging situation for me is that I'm an insulin-dependent diabetic," Abel said in a video taken in his cabin and posted to his Facebook page, adding that regular and timely food intake was a key part of managing his condition.

"We don't have a choice in what we can eat, they announced recently that they're starting on the bottom deck and working their way up – I'm on the ninth deck," Abel said.

"This is not a good situation for me as a diabetic and I'm certain that there are many, many more diabetics on the ship," he added.

A 43-year-old Hong Kong resident on the ship with six family members, including his wife and son, said that as of lunchtime Wednesday, they had gotten coffee and water but no food. They were hungry but had snacks of their own, he said.

"I am not looking forward to the range of emotions in the next two weeks," he told Reuters from his family's windowless room. "Will deal as they come."

The man, who declined to be named, said he, his wife and son had been tested for the virus, since he had a cold on the ship and had seen the doctor, but none of them had been diagnosed with it, although he wondered if the virus would infect them later.

Another passenger, using the handle @daxa_tw, tweeted that he was "hearing from many sides that people are troubled and uneasy."

The cruise ship was caught up in the global coronavirus epidemic after an 80-year-old Hong Kong man, who joined for part of the 14-day cruise, tested positive for the virus after disembarking in Hong Kong on Jan. 25. The man had joined a shore excursion in Kagoshima, southwestern Japan, on Jan. 22, local media reported.

Health Minister Katsunobu Kato said officials will continue to monitor the remaining passengers and crew for the potential development of symptoms, suggesting that more test samples could be taken.

None of the 10 infected people – three each from Japan and Hong Kong, two Australians, one American and one Filipino crew member – had severe symptoms, public broadcaster NHK reported.

In an effort to soothe quarantined passengers, Carnival's Princess Cruises said they will receive free internet and telephone services "in order to stay in contact with their family and loved ones, and the ship's crew is working to keep all guests comfortable."

The ship will go out to sea to perform "normal marine operations," it added, including the production of freshwater, before receiving food and other supplies from Yokohama.

Carnival said that passengers trapped on the Diamond Princess would receive both a full refund and a future cruise credit. It canceled another two cruises that had been scheduled for the same ship to leave Yokohama on Feb. 4 and Feb. 12.

Not all passengers were overly concerned about the major change to the itinerary. American Ashley Rhodes-Courter posted a text message exchange on Instagram with her parents, Gay and Phil Courter, who are on board the ship.

The couple joked that "the food is great, the staff is in good spirits and we're all in the same boat ... Plus they have not run out of some great pinot noir (red wine)."