Thousands stranded on cruise ships as coronavirus deaths near 500 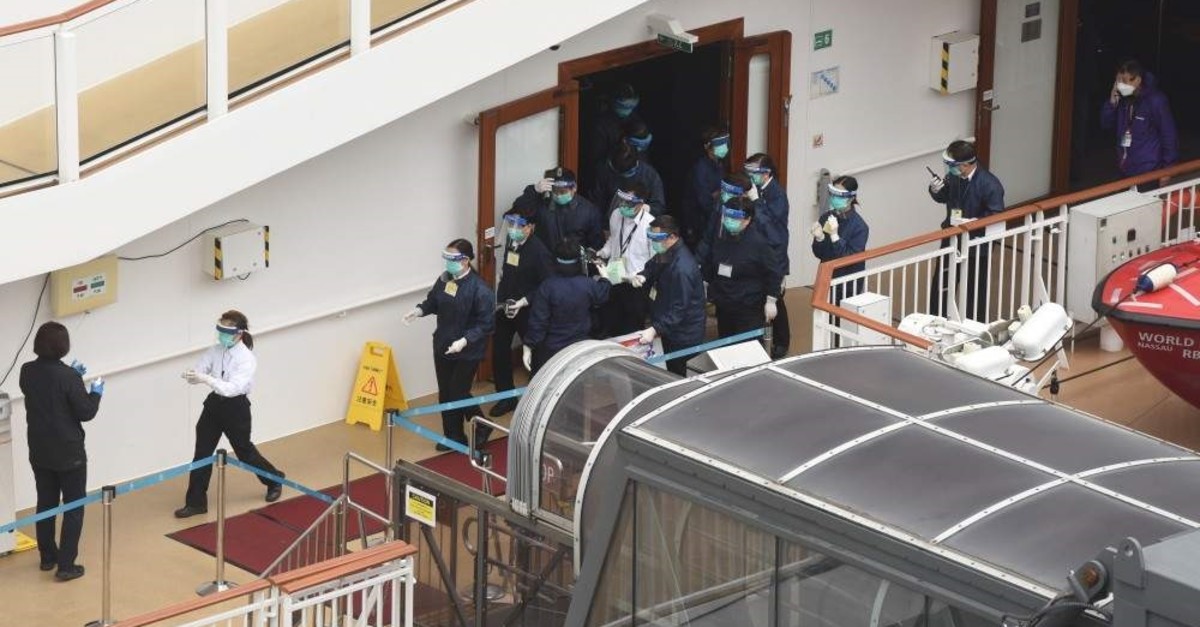 With the death toll from the coronavirus outbreak in China climbing to nearly 500, countries set up effective quarantines as Japan and Hong Kong confined thousands on cruise ships for extensive screening

With important details about the new coronavirus and how it spreads remaining unknown, thousands of passengers became stranded aboard two cruise ships in Japan and Hong Kong Wednesday due to reports of viral infections on board.

Japan confirmed that at least 10 people on a cruise ship have been infected with the new coronavirus, which originated in China. The patients, including nine passengers and one crew member, were from Japan, Hong Kong, Australia, the U.S. and the Philippines. About 3,700 passengers and crew members were to remain on the Diamond Princess ship for another 14 days "as a general rule."

A cruise ship with 1,800 people on board was also being held at Hong Kong's Kai Tak cruise terminal after officials in China informed the cruise operator that three previous passengers had tested positive for the coronavirus. The ship arrived in Hong Kong Wednesday morning after Taiwanese officials refused entry.

With the new coronavirus spreading significantly faster, the number of people affected by the virus outbreak is believed to far exceed the official numbers due to under-reporting of milder virus cases in China’s central city of Wuhan and other parts of Hubei province that are grappling with shortages in testing equipment and beds. In mainland China, the novel virus has killed nearly 500 people, and 24,324 infection cases have been confirmed. However, the official number of confirmed cases in Wuhan, the epicenter of the coronavirus outbreak, only includes individuals admitted to hospitals. Fatalities from the coronavirus epidemic are overwhelmingly concentrated in Wuhan, which accounts for over 73% of deaths. In Wuhan, one person has died for every 23 infections reported. That number drops to one in 50 nationally, and outside mainland China, one death has been recorded per 114 confirmed cases.

China’s Wuhan city has struggled to accommodate the rising numbers of patients over the past few weeks, with lines of hundreds of people forming in front of hospitals and medical supplies running out. Two additional hospitals were ordered to be built in less than two weeks. The first medical center, equipped with 1,000 beds, was inaugurated Monday. In Wuhan, some patients with milder symptoms have been turned away from hospitals in recent weeks because of the strain on resources, several people in the city told Reuters. Others have opted to self-isolate. Under-reporting mild cases, which increases fatality rates, could have a negative social and economic impact as global health authorities race to contain the disease.

The virus has spread to about two dozen countries since first being identified in December, prompting the World Health Organization (WHO) to declare a global emergency. While the new virus appears to be less lethal than the 2003 SARS outbreak, which inflected 8,098 people and killed almost 800 over nine months, it is spreading significantly faster. It took the new virus less than a month to surpass the number of SARS cases.

Pregnant women infected with the new coronavirus may be able to pass it to their unborn children, doctors at the Wuhan Children Hospital said Wednesday, according to state broadcaster CCTV. The doctors said it was possible after an infected coronavirus patient gave birth to a baby on Feb. 2. The newborn was given a test 30 hours later and confirmed to have the virus, the doctors said. "This reminds us to pay attention to the mother-to-child being a possible route of coronavirus transmission," said the chief physician of Wuhan Children Hospital's neonatal medicine department, Zeng Lingkong.

The hospital also disclosed details of a second case involving an infant who was born healthy on Jan. 13. The baby's nanny was later diagnosed with the virus and the mother days later. The baby started showing symptoms on Jan 29.

As doctors scramble to contain the fast-spreading coronavirus globally, Russia said Wednesday it will take between eight and 10 months to develop a vaccine against the coronavirus, the Interfax news agency cited Health Minister Mikhail Murashko as saying. "Today the process of developing a vaccine is not a short period of time. A vaccine is being developed for at least eight to 10 months, this is just the initial stage without clinical trials," said Murashko.

Meanwhile, in the U.K., a leading British scientist has made a significant breakthrough in the race for a coronavirus vaccine by reducing a part of the normal development time from "two to three years to just 14 days," Sky News reported. Robin Shattock, head of mucosal infection and immunity at Imperial College London, said he is now at the stage to start testing the vaccine on animals as early as next week with human studies in the summer if enough funding is secured, Sky said.