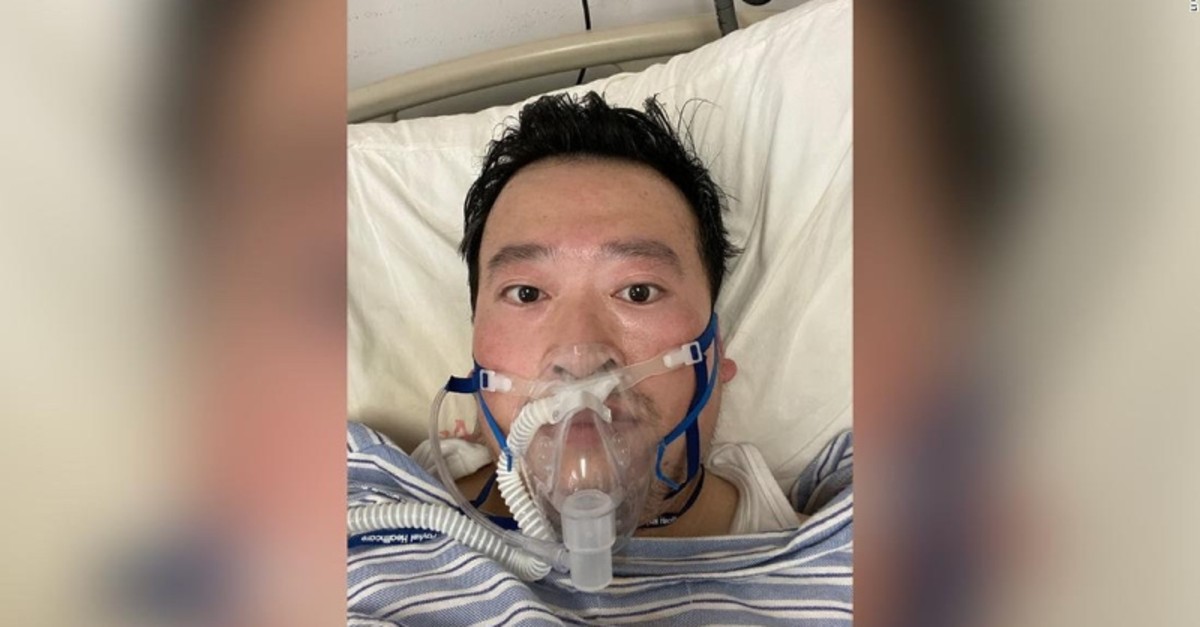 A Chinese doctor who got in trouble with authorities in the communist country for sounding an early warning about the deadly coronavirus outbreak died late Friday, Bloomberg reported in a piece citing a person familiar with the matter.

"In the fight against the epidemic of the new coronavirus pneumonia, Li Wenliang, an ophthalmologist of our hospital, was unfortunately infected. He is currently in critical condition and we are trying our best to rescue him," Wuhan Central Hospital said earlier on the same day in a social media post just after midnight.

Late Thursday, Chinese media reports also said the 34-year-old Li had died. And the World Health Organization tweeted: "We are deeply saddened by the passing of Dr. Li Wenliang. We all need to celebrate work that he did" on the virus.

Li was reprimanded by local police for "spreading rumors" about the illness in late December, according to news reports. The outbreak, centered in Wuhan, has now infected over 28,200 people globally and killed more than 560.

The hospital's social media post received nearly 500,000 comments in the first half-hour afterward, with many people hoping Li would pull through. One wrote: "We are not going to bed, we are here waiting for a miracle."

Meanwhile, a newborn became the youngest known person infected with the virus. China finished building a second new hospital Thursday to isolate and treat patients and moved people with milder symptoms into makeshift quarantine centers at sports arenas, exhibition halls and other public spaces. And testing of a new antiviral drug was set to begin on patients.

While the overwhelming majority of deaths and infections have been in China, more than 200 people with the illness have been reported in over two dozen other countries, including Japan, Singapore, Thailand, South Korea and the U.S.

China's National Health Commission said the number of infected patients who were "discharged and cured" stood at 1,153. No details were given, but milder cases have been seen in younger, healthier people.

The youngest patient is a baby born Saturday in Wuhan and confirmed positive just 36 hours after birth, authorities said.

"The baby was immediately separated from the mother after birth and has been under artificial feeding. There was no close contact with the parents, yet it was diagnosed with the disease," Zeng Lingkong, director of neonatal diseases at Wuhan Children's Hospital, told Chinese TV.

Zeng said other infected mothers have given birth to babies who tested negative, so it is not yet known if the virus can be transmitted in the womb. That "needs further study," he said.

The new virus is in the coronavirus family that includes MERS and SARS, and it causes fever, cough, shortness of breath and, in severe cases, pneumonia.

A 1,500-bed hospital specially built to deal with the outbreak was completed in Wuhan, days after a 1,000-bed hospital with prefabricated wards and isolation rooms began taking patients.

Wuhan is also operating an additional 132 quarantine sites with more than 12,500 beds, according to the official Xinhua News Agency.

Authorities are racing to increase the number of beds in Wuhan and the rest of the hard-hit Hubei province, where the health care system has been so overwhelmed that some sick people have been turned away from hospitals and sent home, raising the risk of their spreading the virus to others.

Altogether, more than 50 million people are under virtual quarantine in Hubei in an unprecedented – and unproven – bid to bring the outbreak under control.

In Hong Kong, hospital workers demanding a shutdown of the territory's border with mainland China were on strike for a fourth day. Hong Kong leader Carrie Lam announced a 14-day quarantine of all travelers entering the city from the mainland starting Saturday, but the government has refused to seal the border entirely.

Two docked cruise ships with thousands of passengers and crew members remained under 14-day quarantines in Hong Kong and Japan.

Ten passengers confirmed to have the virus were escorted off the Diamond Princess at the port of Yokohama near Tokyo after 10 others were taken off the previous day. Those taken to hospitals Thursday were mostly in their 60s and 70s, four of them Japanese, two Americans, two Canadians, one New Zealander and one Taiwanese.

Tests were still pending on others on board who had symptoms or contact with infected people.

"It's going to be like a floating prison," passenger David Abel lamented on Facebook. He had set out on a 50th wedding anniversary luxury cruise but found himself in his cabin, eating a "lettuce sandwich with some chicken inside."

More than 3,600 people on the other quarantined ship, the World Dream, underwent screening after eight passengers were diagnosed with the virus.

Xinhua said that clinical trials for the antiviral drug Remdesivir have been approved and that the first group of patients was expected to start taking it on Thursday. It is made by U.S. biotech company Gilead Sciences.

Antivirals and other drugs can reduce the severity of an illness, but "so far, no antivirals have been proven effective" against the new virus, said Thanarak Plipat, deputy director-general of Thailand's Disease Control Department in the Health Ministry. He said there are a lot of unknowns, "but we have a lot of hope as well."

From Europe to Australia and the U.S., universities that host Chinese students or have study-abroad programs are scrambling to assess the risks, and some are canceling opportunities and prohibiting student travel.

Central banks in the Philippines and Thailand have cut their interest rates to fend off economic damage from the outbreak in China, the world's second-biggest economy, with 1.4 billion people. China is a major source of tourists in Asia, and corporations around the world depend on its factories to supply products and its consumers to buy them.

The organizers of the Tokyo Olympics again sought to allay fears that the 2020 Games could be postponed or canceled because of the crisis.