Thousands left stranded aboard cruise ships due to coronavirus fears 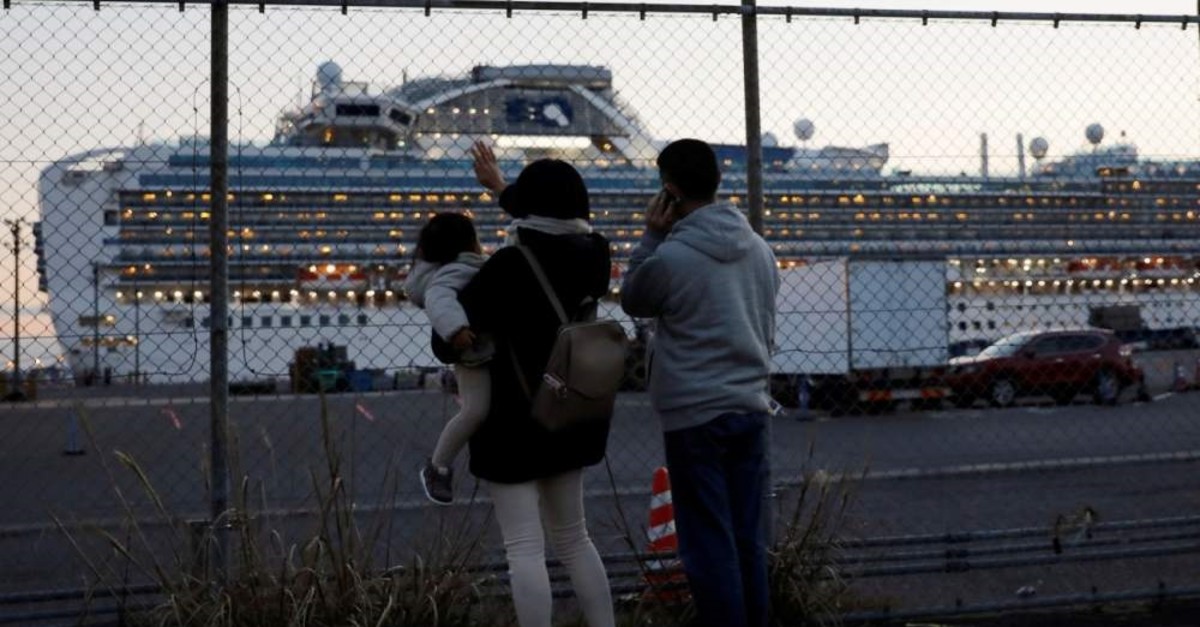 Family members of passengers aboard the cruise ship Diamond Princess wave and talk to them on the phone at Daikoku Pier Cruise Terminal, Yokohama, Feb. 11, 2020. (REUTERS Photo)
by Daily Sabah with Agencies Feb 11, 2020 7:55 pm

With the coronavirus outbreak that originated in Hubei province, China, showing no signs of abating any time soon, many countries have turned away cruise ships out of fear of more virus cases, leaving thousands of passengers stranded at sea.

Thailand became the latest country that denied entry to a luxury cruise ship. Thailand's Public Health Ministry said in a statement on Tuesday that it will consider a request from the Westerdam cruise ship to dock in Thailand. Public Health Minister Anutin Charnvirakul posted on Facebook that he has issued orders to bar the ship from docking, even though there are no confirmed cases on board.

Holland America Line said on Monday, before Anutin's announcement, that it planned to disembark guests at a port around 120 kilometers southeast of Bangkok on Thursday. It departed on Feb. 1 from Hong Kong, where there are currently 49 confirmed infections and border restrictions in place.

In a coronavirus outbreak aboard the Diamond Princess cruise ship, which has been quarantined off Yokohama, Japan, since last Monday, the number of cases climbed to at least 135. About 3,700 passengers and crew are on board. Passengers began their journey on Jan. 20 at Yokohama and were supposed to have ended their trip Feb. 4. The ship is expected to stay in quarantine until Feb. 19.

The World Health Organization (WHO) confirmed in a tweet that newly diagnosed cases on the ship should not extend the length of the quarantine. Quarantine provisions for those suspected of carrying the infection currently extend 14 days, during which time the carrier may not exhibit symptoms. Some experts have suggested that the virus can be transmitted during this asymptomatic incubation, although others have cast doubt on this.

In Hong Kong, 3,600 people were confined aboard the World Dream last week, where at least eight former passengers have tested positive for the virus.

On Monday, 108 people died due to the virus, according to figures released by the country's health authorities, a spike that exceeded the 97 deaths recorded the day before. The National Health Commission reported that 103 of the 108 new deaths occurred in Hubei. The death toll now stands at 1,016. Within the same 24-hour period, 2,478 new infections were confirmed across China, bringing the total tally up to 37,626. In Hubei province alone, the number of confirmed cases has reached over 30,000. Since the beginning of the outbreak in December, the virus has spread to about two dozen countries, but so far there have been only two deaths outside mainland China.

WHO warns of 'grave' global threat

The coronavirus outbreak that has killed over 1,000 people in China poses a "very grave threat for the rest of the world," the head of the WHO said on Tuesday. Tedros Adhanom Ghebreyesus noted that 99% of cases have occurred within China and only two fatalities have been reported abroad. But he said it was "concerning" that person-to-person transmissions to people with no travel history to China had recently appeared in France and Britain.

Tedros made the comments at the launch of a two-day scientific conference in Geneva on Tuesday to speed up the development of medications and vaccines for the new coronavirus. The new coronavirus was only identified late last year in the Chinese city of Wuhan, and there are no licensed drugs or vaccines. Diagnostic tests have been developed by several laboratories, but there are no rapid tests available. More than 300 scientists were expected to dial in remotely to the two-day meeting in Geneva. On Tuesday, a team of U.K. scientists believes they are one of the first to start animal testing of a vaccine for the new coronavirus. Researchers at Imperial College London said their ultimate goal was to have an effective and safe way of halting the SARS-like strain's spread by the end of the year.

Meanwhile, the outbreak is hitting a peak in China this month and may end by April, the government's senior medical adviser said on Tuesday, in the latest assessment of an epidemic that has rattled the world. Zhong Nanshan, an 83-year-old epidemiologist who won fame for combating the SARS epidemic in 2003, was optimistic that the new outbreak would soon slow, with the number of new cases already declining in some places. The peak should come by mid or late February, followed by a plateau and decrease, Zhong said, basing the forecast on mathematical modeling, recent events and government action.