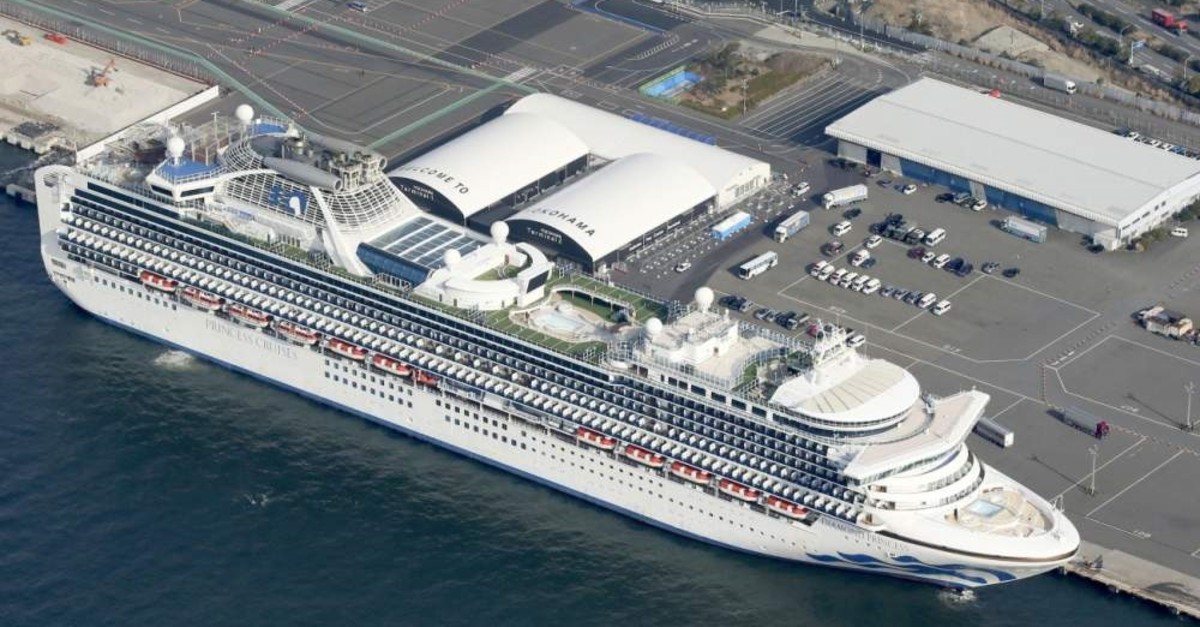 The U.S.-operated Diamond Princess is anchored as emergency vehicles stand by at Yokohama Port, near Tokyo, Wednesday, Feb. 12, 2020. (Kyodo News via AP)
by Compiled from Wire Services Feb 12, 2020 9:15 am

Japan's health ministry said Wednesday that 39 new cases of a virus have been confirmed on a cruise ship quarantined at a Japanese port.

The update brings the total found on the Diamond Princess to 174 cases.

The ministry also said the virus was confirmed in a official who participated in the initial quarantine checks the night the ship returned to Yokohama Port near Tokyo on Feb. 3. The quarantine official is being treated in the hospital.

The new cases bring Japan's total to 203 people infected by the the new virus, COVID-19.

The night of the ship's arrival, Japanese health officials began medical checks on all of the ship's 3,700 passengers and crew after one previous passenger tested positive for the virus. Those who remain on the ship have been asked to stay inside their cabins and allowed only briefly onto open decks — as long as they wear face masks.

When the boat arrived off Japan, authorities initially tested nearly 300 people of the 3,711 aboard for the virus, gradually evacuating dozens who were infected to local medical facilities. In recent days, testing has expanded to those with new symptoms or who had close contact with other infected passengers or crew. There have been 492 tested in total, mostly those showing symptoms or who have had close contact with a confirmed positive case. Passengers have been asked to wear masks and keep a distance from each other when outside, and given thermometers to regularly monitor their temperatures.

The captain told passengers in a message live broadcast via social media: "This is an ever-changing situation and decisions are being made daily to ensure we are following the latest and best public health guidelines from the authorities."

He apologized for the "periodic service disruptions" to the internet, adding: "Diamond Princess has more bandwidth than any ship in the world and at the same time, more mobile devices than ever before connected on a ship."

The U.S.-operated Diamond Princess had completed a 14-day tour during which it stopped at Hong Kong and several other Asian ports before returning to Japan. An 80-year-old man who disembarked in Hong Kong tested positive for the virus, prompting Hong Kong to notify the ship and Japanese authorities, who then ordered the quarantine and testing.

Concerns over the virus have rerouted and canceled other cruises. The Westerdam cruise ship carrying 2,257 passengers and crew is now in the Gulf of Thailand with nowhere to dock after being refused entry in Japan, Taiwan, the Philippines and Thailand. There are no confirmed cases of the virus on board, but it stopped in Hong Kong less than two weeks ago, which is within the incubation period of the virus.

COVID-19 is a coronavirus that emerged in China in December.