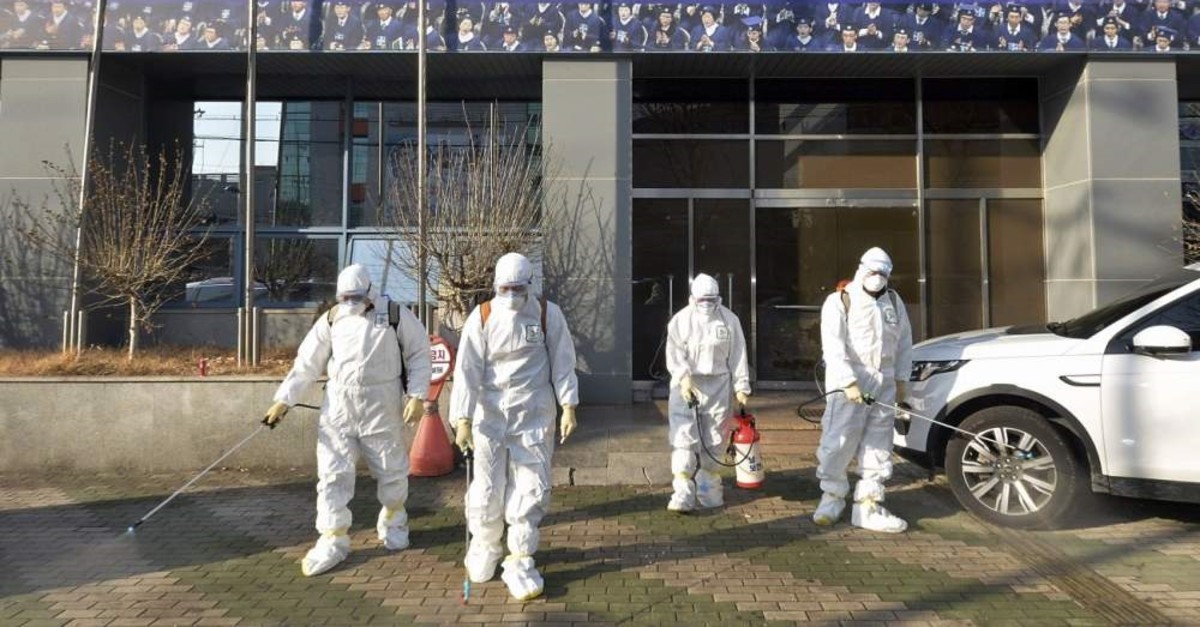 In this Wednesday, Feb. 19, 2020, photo, workers wearing protective gears spray disinfectant against the coronavirus in front of a church in Daegu, South Korea. (Newsis via AP)
by Compiled from Wire Services Feb 20, 2020 9:40 am

The mayor of the South Korean city of Daegu urged its 2.5 million people on Thursday to refrain from going outside as cases of a new virus spiked and he pleaded for help from the central government.

Mayor Kwon Young-jin made the request in a televised news conference after the southeastern city and its nearby towns reported 35 additional cases of infection with the new coronavirus on Thursday.

Kwon also asked Daegu citizens to wear masks even indoors if possible. He expressed fears that the rising infections in the region will soon overwhelm the city’s health infrastructure and called for urgent help from the central government in Seoul.

The Korea Centers for Disease Control and Prevention said 28 of those 35 new patients went to church services attended by a previously confirmed virus patient. That patient is a South Korean woman in her early 60s who has no recent record of overseas travel, according to center officials.

On Wednesday, the city confirmed 13 cases and 11 of them either went to the same church with the woman patient or contacted her at a hospital, according to the disease control center.

The explosion of infections in Daegu and the neighboring southeast region, as well as some new cases in the Seoul metropolitan area where the sources of infections were unclear, have raised concern that health authorities are losing track of the virus as it spreads more broadly in the country.

“National quarantine efforts that are currently focused on blocking the inflow of the virus (from China) and stemming its spread are inadequate for preventing the illness from circulating in local communities,” Kwon said.

South Korea has reported a total of 82 cases of COVID-19, a disease first detected in Wuhan, China, in December.

In a telephone conversation with Kwon, President Moon Jae-in said the central government will make all available assistance to help the Daegu city to fight against the virus’ further spread, according to the presidential Blue House.

Meanwhile, mainland China reported Thursday the lowest number of confirmed cases of COVID-19 since late January, partly because of a change in diagnostic criteria for patients in Hubei province.

China had 394 new confirmed cases Wednesday, the National Health Commission (NHC) said, sharply down from 1,749 cases a day earlier and the lowest since Jan. 23.

That brings the total accumulated number of confirmed cases in mainland China to 74,576. Another 114 people were reported to have died from the new illness, bringing the total to 2,118.