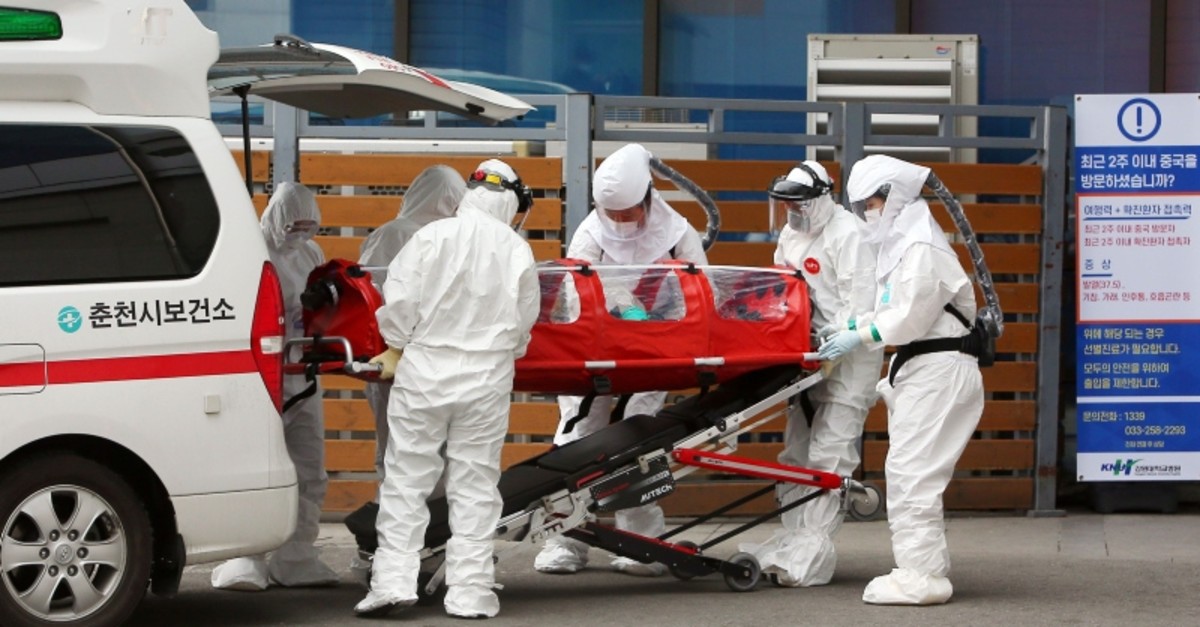 Medical workers wearing protective gear carry a patient infected with the COVID-19 coronavirus at a hospital in Chuncheon on Feb. 22, 2020 (AFP Photo)
by Compiled from Wire Services Feb 23, 2020 9:45 am

China's National Health Commission announced Sunday the death toll from the novel coronavirus hit 2,444 with thousands of other patients facing serious health conditions, while the number of new cases has surged in Iran and Italy.

According to the commission's statement, 97 people lost their lives due to the virus, now officially called COVID-19, and about 650 new cases were confirmed in the past 24 hours.

In an earlier statement, Chinese health authorities said the virus posed more of a risk to the elderly, men and people suffering from diseases.

It has spread to more than 20 other countries including the U.S., the U.K., Singapore, France, Russia, Spain and India.

Many countries, including Turkey, have evacuated their citizens from the city of Wuhan-the epicenter of the virus-and other affected areas of China, placing them under quarantine and monitoring.

The contagion's spread prompted the World Health Organization (WHO) to warn that Africa's unprepared health systems left the continent vulnerable to the COVID-19 disease, which spilled out of China and has infected more than 77,000 people in more than 25 countries.

Already one of the worst-hit nations outside of China, South Korea reported 123 new cases on Sunday, taking its fast-rising total to 556. Its death toll also rose to four with two additional fatalities.

The higher toll came a day after Prime Minister Chung Sye-kyun said the nation of around 51 million people faced a "grave" situation.

The Shincheonji Church of Jesus in the southern city of Daegu – considered by many a cult – has emerged as a hotbed of contagion, with hundreds of members infected.

Italy and Iran began introducing the sort of containment measures previously seen only in China, which has put tens of millions of people under quarantine lockdown in the epicenter province of Hubei.

More than 50,000 people in about a dozen northern Italian towns near the business hub of Milan were urged by authorities to stay home, shuttering shops and schools.

Among dozens of cases, Italy on Friday became the first European country to report one of its nationals had died from the virus – a 78-year-old retired bricklayer in the region of Veneto.

That was followed Saturday by the death of a 77-year-old woman in Lombardy.

Officials said all patients in Lombardy were linked to a 38-year-old man in intensive care in the town of Codogno, whom Italian media say dined in January with a friend who had returned from China.

The friend has since tested negative, however, illustrating mounting frustration among authorities worldwide over exactly how the virus spreads and the duration of its incubation period.

China reported another 97 deaths in its daily update on yesterday, taking its total to 2,442, plus another 648 new infections. Nearly 80,000 infections have been reported worldwide.

The vast majority of Chinese deaths and new infections remained concentrated in the hard-hit city of Wuhan, where the virus is believed to have first emanated from a live animal market in December.

China's infection rate has slowed sharply from earlier in the epidemic, but repeated Chinese flip-flopping over counting methods has sowed confusion over its data.

Iran ordered the closure of schools, universities and cultural centers across 14 provinces from Sunday following eight deaths in the country – the most outside East Asia and the first in the Middle East.

Iran's health ministry said Sunday the death toll from the new virus in the country has risen to 8 people, confirming 43 cases of the illness. Spokesman for the Iranian health ministry Kianoush Jahanpour was speaking on state TV.

The outbreak in Iran has centered on the holy city of Qom, where officials say travelers from China brought the new coronavirus.

Jahanpour added that out 15 newly confirmed cases, 7 were in Qom, while four were in the capital, Tehran.

"The concern is... that we have seen ... a very rapid increase (in Iran) in a matter of a few days," said Sylvie Briand, director of the WHO's global infectious hazard preparedness department.

Iran's government also ordered all "art and cinema events" nationwide canceled until the end of the coming week.

Although Egypt is the only African country with a confirmed case of COVID-19, the WHO warned that the continent's health systems were ill-equipped to cope with a potential major outbreak and urged more cooperation among the African Union.

WHO chief Tedros Adhanom Ghebreyesus said necessary treatment tools such as respiratory support machines are "in short supply in many African countries, and that's a cause for concern."

The U.S. State Department said global anxiety was being stoked by a coordinated effort by thousands of Russian-linked social media accounts to spread conspiracy theories that the outbreak was a U.S.-orchestrated ploy to damage China, officials said.