India scrambles to give Trump a mega-rally 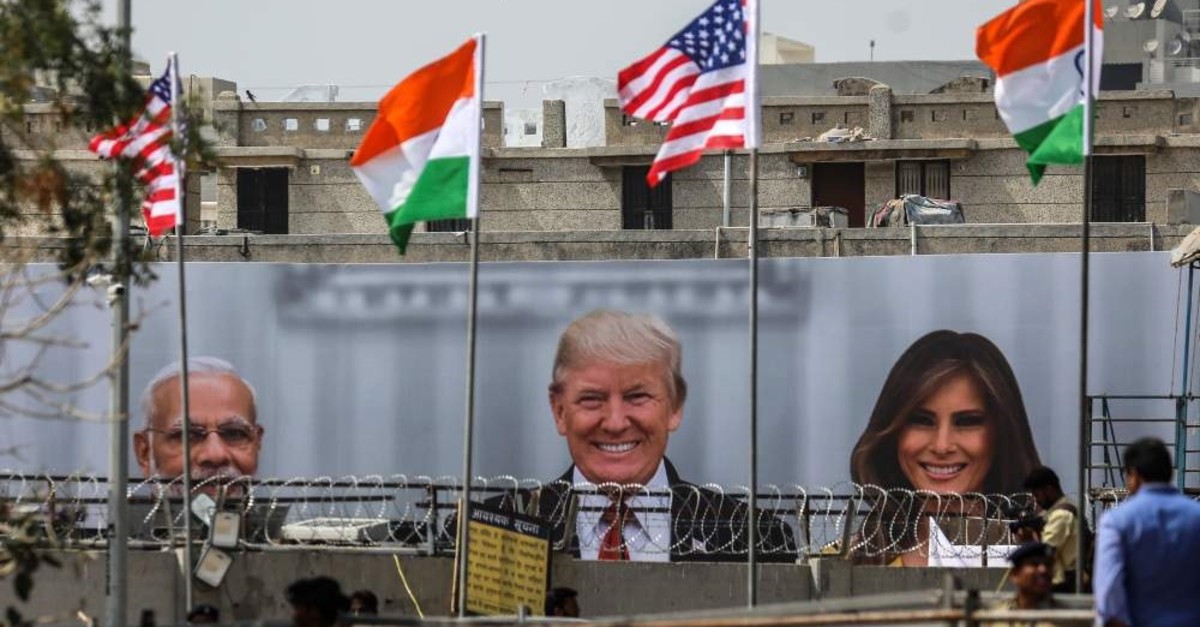 The sun-baked city of Ahmedabad was jostling with activity on Sunday as workers cleaned roads, planted flowers and hoisted hundreds of billboards featuring President Donald Trump, a day ahead of his maiden two-day visit to India after Prime Minister Narendra Modi promised him a boisterous public reception.

Hundreds of thousands of people in the northwestern city are expected to greet Trump on Monday for a road show leading to a massive rally at what has been touted as the world's largest cricket stadium.

Trump's motorcade will travel amid cheers from a battery of carefully picked and vetted Modi loyalists and workers from his Bharatiya Janata Party who will stand for hours alongside the neatly manicured 22-kilometer (14-mile) stretch of road to accord Trump a grand welcome.

Tens of thousands of police officers will be on hand to keep security tight and a new wall has come up in front of a slum, apparently to hide it from passers-by.

Monday's event is the second act of growing bonhomie between Trump and Modi after they shared a stage last year in Houston at a rally called "Howdy, Modi!" that featured flashy Bollywood musical and dance numbers and was organized by a nonprofit group with Hindu nationalist links.

Modi's Hindu nationalist government is pulling out all the stops, at an expense of more than $14 million, to woo the president and first lady Melania Trump. But experts have said that very little of substance will be achieved for either side beyond the pageantry and symbolism.

For Modi, however, the event could be a reprieve from opposition in the country against some of his recent policies, a slumping economy and ongoing protests over a new citizenship law that excludes Muslims.

Experts say a U.S.-India trade pact, which has been in the works from the last three years, seems off the table.

"They've been hitting us very hard for many, many years," Trump said this week, while quickly adding, "I really like Prime Minister Modi."

The slick extravaganza, to the annoyance of some locals, has not gone well for Modi's rivals, who have said Trump's visit will not benefit India but is aimed at boosting the American economy.

Jaiveer Shergill, a spokesman for the main opposition Congress party, said Saturday that relations between the two countries "should be weighed on scales of targets achieved" and need to remain beyond "hugs and handshakes."

The pomp and show around the rally seem to have gotten to Trump, who on Sunday tweeted a mashup video from a blockbuster Indian movie. The video had his face superimposed on the protagonist and showed the president as a medieval-era war hero participating in a battle.

"Look so forward to being with my great friends India!" Trump said in the tweet.

Trump on Monday is also expected to travel to the 17th century monument to love, the Taj Mahal.

On Tuesday, he will participate in ceremonial events and meet with government officials, business leaders and U.S. Embassy staff, followed by a dinner at the presidential palace in New Delhi.

But his visit to Ahmedabad, Modi's home turf, is seen as an important moment for the Indian leader, as the rally may help displace his association with deadly anti-Muslim riots in 2002 that landed him a U.S. travel ban.

Muslim leaders and human rights groups say that as chief minister of Gujarat state, Modi did little to stop the 2002 anti-Muslim riots, a charge he has denied. Suspicions that Modi quietly supported the riots led the U.S. to deny him a visa, which has since been reversed. Government investigators eventually ruled there was no evidence to charge him.

Ahmedabad is also the city where Modi rose up the ranks of Rashtriya Swayamsevak Sangh, a Hindu nationalist group with millions of followers that eventually gave rise to Modi's Bharatiya Janata Party.
RELATED TOPICS