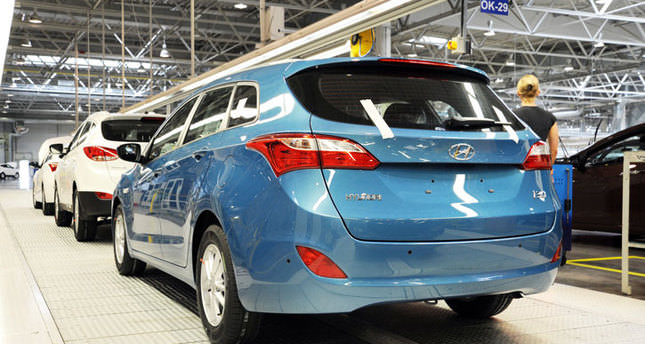 by Daily Sabah Apr 29, 2014 12:00 am
IZMIT — THE SOUTH Korean giant's Turkey-based factory will boost production capacity in its facility in Alikahya, İzmir to 200,000 and will export 178,000 vehicles to more than 30 countries, according to General Director of Hyundai Turkey Önder Göker.

Investing TL 1.2 billion in Turkey, Hyundai Assan raised the number of shifts to three at the İzmir Alikahya facilities with exports scaling up. Hyundai will increase its capacity to 200,000 units in 2014 and export 178,000 vehicles to more than 30 countries, primarily in Europe.

General Director of Hyundai Assan Önder Göker stated that Hyundai has a total capacity of 500,000 units in its factories in the Czech Republic and Turkey.

Göker noted Hyundai wants to raise its market share in Europe to 3.5 percent, mainly with the products manufactured in those factories and added, "The demand is highly satisfying in both domestic and foreign markets. We have scaled up to three shifts since the previous month."

Göker highlighted that their market share of 5.9 percent in Turkey in 2013 increased to 6.5 percent in the first three months of 2014. "We have raised our share in the market in the first quarter despite the shrinkage of 25 percent. We aim to close the year with a share of 6.5 percent," Göker concluded.