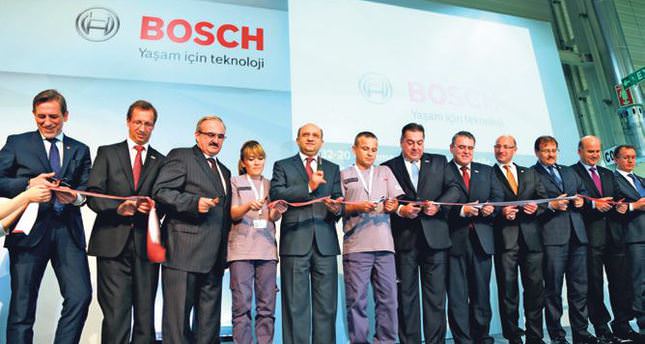 by AA Jun 23, 2014 12:00 am
Bosch, the world's leading manufacturer of car parts opened a TL 800 million injector production facility in Bursa in northwestern Turkey, providing 1,000 jobs in the region. The opening ceremony was attended by Industry Minister Fikri Isık.

German giant Bosch opened a TL 800 million "CRI2-20 Common Rail Diesel Injector Production Facility" in Bursa, in the northwest of Turkey on Friday, the first such Bosch facility outside of Germany. Science, Industry and Technology Minister Fikri Işık said at the opening ceremony that this facility is not an ordinary production plant, but a "high-tech facility" in which the component will be used in the automotive industry. The factory will have almost 1,000 workers, and all the products will have the "Made in Bursa, Made in Turkey" label, the minister said.

The Bosch Group is a leading global supplier of technology and services, generating 46.1 billion euros in 2013 alone. Its operations are divided into four business sectors: automotive technology, industrial technology, consumer goods, and energy and building technology. In 2012, at least four of every five diesel vehicles sold worldwide were equipped with a common-rail system, says Bosch, which is the market leader for this technology.
RELATED TOPICS