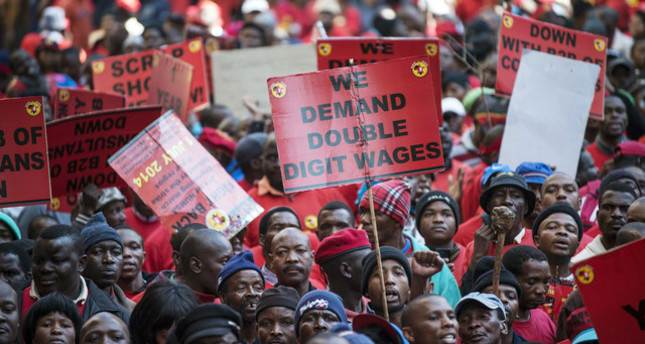 by Jul 04, 2014 12:00 am
General Motors suspended production at its main South African plant after a strike hit parts supplies, the U.S. automaker said on Friday, becoming the latest victim of relentless labour unrest in Africa's most advanced economy.

Violence erupted on some picket lines, as the wage strike by the National Union of Metalworkers of South Africa (NUMSA) dealt a further blow to an economy damaged by a five-month walkout in the platinum industry that only ended last week.

It will also further unnerve investors, increasingly frustrated by the unremitting labour strife and perceptions that Pretoria is unable, or unwilling, to rein in militant unions.

About 2,000 workers affiliated with the National Union of Mineworkers went on strike at Impala Platinum's IMPJ.J Marula mine on Friday demanding higher wages, in apparent response to the deal secured by rival union AMCU last week.

GM's suspension of output at its plant in the coastal city of Port Elizabeth showed the escalating impact of the walkout, after NUMSA rejected an increased wage offer from the Steel and Engineering Industry Federation of Southern Africa (SEIFSA).

"The plant has been shut since yesterday because of the parts supplier issues," spokeswoman Denise van Huyssteen said.

NUMSA's more than 200,000 members went on strike on Tuesday, a move employers say will cost the economy more than $28 million a day in lost output.

SEIFSA said it offered wage increases of up to 10 percent late on Thursday, revised from 8 percent. The union wants hikes of 12 to 15 percent, more than double the inflation rate.

"Regrettably, it would appear that we continue to be miles apart with the union," SEIFSA chief executive Kaizer Nyatsumba said in a statement.

In contrast, NUMSA boss Irvin Jim said on Friday he believed the two sides were "not very far from each other". Issues like a youth wage subsidy and the removal of labour brokers were key to a settlement, he told Reuters.

Other sticking points have been NUMSA's insistence that any agreement should apply for one year, while employers want to lock down a three-year deal.

South Africa's labour minister was meeting the union after earlier talking to employers on Friday, a spokesman told Reuters, adding the government was hopeful of a deal soon.

Credit ratings agency Moody's said this week the labour unrest would consign South Africa to a third consecutive year of sub-par growth and posed risks for its rating.

"I think we've become prisoners of the ratings agencies ... I think our sovereignty is completely lost," NUMSA's Jim said.

In one industrial area east of Johannesburg, mobs of strikers smashed car windshields and attacked workers who crossed picket lines, a witness said.

"They are breaking factory windows," said James, who declined to give his surname. "They are attacking people".

President Jacob Zuma's government said it was concerned about the reports of vandalism and intimidation. It appealed for dialogue.

Around 26 strikers were arrested in Gauteng province, which includes Johannesburg, on charges of public violence and malicious damage to property, police said.

SEIFSA said many employers represented by the federation had reported "serious incidents of violence" by strikers, including damage to property and assaults on those reporting for work.

"People fear for their safety in their workplaces, where windows have been stoned, entrance gates broken and workers intimidated on site," said Marius Croucamp, head of the metals and engineering sector at the Solidarity union, which has not joined the NUMSA-led strike.

Some automakers said they had not yet been affected.

The local unit of Mercedes Benz, an arm of Germany's Daimler AG, said it did not expect an immediate impact.

The stoppage will further dent investor confidence already hurt by the platinum strike that dragged the economy into contraction in the first quarter.