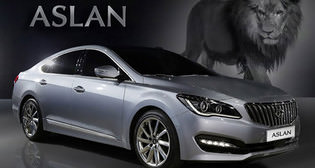 by Daily Sabah Aug 26, 2014 12:00 am
Korea's largest automaker Hyundai Motor unveils its new AG luxury sedan, "Aslan," Turkish for lion, Sunday. The front-wheel drive sedan with a strong-looking exterior, classic interior and sound driving performance will be launched later this year. Korea's largest automaker announced that it confirmed the name of AG (project name) as such.

AG was unveiled to the world at the Busan International Motor Show in May this year.

Hyundai explained, "equipped with a luxurious and prestigious exterior, comfortable driving and the best of class quietness, Aslan has a similar image of a lion, which maintains composure looking down the savanna but turns into a beast when hunting prey."

Aslan is a front-wheel drive model that is between "Grandeur" and "Genesis" in size. It is expected to be the same as Grandeur in height or width, but the length is expected to be longer than Grandeur by 5 centimeters. Reportedly, Aslan will be running on a 3.0L or 3.3L gasoline engine, which comes in the Grandeur's high-end models.

According to Hyundai, "Hyundai's design identity, 'Fluidic sculpture (design based on water-flowing lines) 2.0' was applied to the exteriors." Aslan succeeded the Hyundai family look, which makes it look similar to other recently launched cars such as "LF Sonata" or "New Genesis."

The price is likely to be formed between 40 million won and 45 million won (TL 85-96,000). This is Hyundai's first launch of a 100 percent new vehicle, not a face-lift, in three years after the launch of European style sedan "i40" in 2011. The intention seems clear. Hyundai wants to wage a full frontal attack against imported cars, of which the domestic market share is expected to exceed 15 percent within this year.

Based on consumer research, Hyundai found out that many customers who had driven Grandeur chose imported cars over Genesis or "Equus." Hyundai aims to establish the new vehicle Aslan as a mid-class model between Grandeur and Genesis and is trying to regain domestic customers who want to buy imported cars.

Recently, there is a trend among other major imported premium carmakers, such as BMW, to break down the car segments from small-sized 1 series to luxury sedan 7 series. Such market trends seem to have affected Hyundai's new vehicle launch.

Some market analysts say that Aslan may produce a "self-erosion" phenomenon by reducing the sales volume of Grandeur, Hyundai's flagship model. Instead of choosing Aslan over imported cars, the existing customers of Grandeur may move to Aslan.

Hyundai is also concerned about this and started providing various selections of Grandeur, such as diesel and hybrid models in addition to the existing gasoline model. This is a proactive countermeasure to minimize the secession of Grandeur customers to Aslan.

In the past, Hyundai launched a new vehicle targeting an intermediate segment between popular cars. But these challenges didn't reap fruitful results. Marsha, a mid-class sedan between Sonata and Grandeur, was the representative case.

Customers turned their back on Marsha, as the car failed to distinguish itself between Sonata, in the middle of the mid and large-sized sedan segments, and Grandeur, an entry model of the luxurious premium segment.

Professor Kim Pil-soo of the Automotive Engineering at Daelim University said, "Aslan's launch will inevitably shrink the sales of Grandeur. If there is no obvious differentiation in product quality, the new vehicle's success will be determined by how the marketing can differentiate Aslan and Grandeur."