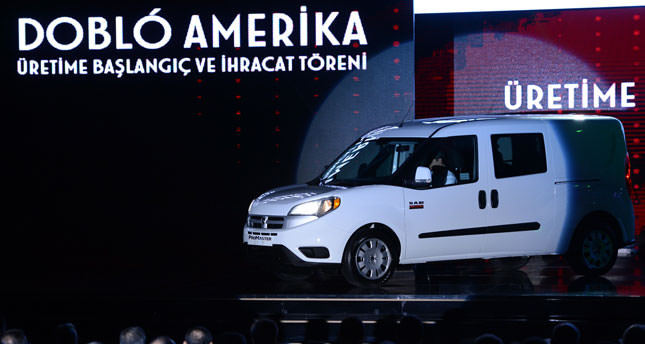 TOFAŞ, a leading automobile company in Turkey, announced the start of Doblo exports to the U.S. with a ceremony in Bursa attended by of Prime Minister Davutoğlu

The "Doblo U.S. Production Start and Export Ceremony," organized in TOFAŞ's Turkish Automobile Factory in Bursa and attended by Prime Minister Ahmet Davutoğlu, announced one of the biggest successes of the Turkish automotive industry: The beginning of Doblo exports to America.

Davutoğlu congratulated TOFAŞ, Koç Holding and Fiat Chrysler, and thanked all the workers who were involved in achieving such a success, saying, "If the deceased Vehbi Koç were here, he would be extremely pleased to see that his saying, 'I'm in for my country,' has come true. This is a day to be proud of. I am pleased to attend this ceremony to celebrate the start of exporting Doblo to America."

It was noted at the ceremony that about 175,000 Doblos will be exported, which accounts for almost half the total car production in 2002. The total value of such a large quantity of exports will be around $3.2 billion, again accounting for almost all of the automobile exports in 2002. Davutoğlu emphasized that such figures indicate how the Turkish economy and automobile sector has grown within recent years.

"This is an extremely important development in three ways: First, for production, the boom in the real economy and for production capacity; second, for our exports and third, for our export targets. Furthermore, the cars are to be exported to North America; the U.S. and Canada are also to be congratulated for supporting our mutual trade," Davutoğlu said.

The CEO of Koç Holding, Mustafa Koç, said that Koç Holding will continue to invest in the future of the Turkish automobile sector - a sector they strongly believe in. "Our investments, which started with the renovation of Doblo, will continue with three new passenger cars: A sedan, a station wagon and a hatchback, and will reach $1.4 billion besides other current investments.

"Our investments in the automobile sector since 2010 has reached TL 10 billion ($4.47 billlon)," Koç said, and added that the recently concluded TOFAŞ's investment agreements are a sign of the faith we have in our country and its future.

With a $360 million investment, Doblos are included in the light commercial vehicle class and will be sold under the Ram brand in the U.S. Around 175,000 vehicles will be sent to the U.S. by 2021.

When Fiat Auto's decided to produce one of its models outside of Turkey, Doblo production stepped in to replace them, and commenced production in September 2000. During this TOFAŞ project, which also holds all intellectual and industrial property rights, TOFAŞ's Research and Development Department assumed a huge role and responsibility.

In the first year of production, around 100,000 vehicles were produced, which was a record on its own, and 90 percent of the vehicles produced were exported to 43 countries. In 2001, Doblos delivered to European countries made up 83 percent of TOFAŞ's total exports and supported the Turkish economy, which was then experiencing tough times.

In addition to becoming the champion in exports and commercial vehicle of the year, Doblo also became one of the highest-selling models of TOFAŞ. To date, 1.4 million Doblo vehicles have been produced and 1 million have been exported to more than 80 countries.

Davutoğlu noted that this was important for increasing production and supporting growth. He also added that when the reactions of countries when faced with global economic crisis are observed, it is evident that if the growth is not based on other areas in the service sector, but on the real economy and on production, then the damage of such a crisis is more severe in that country.

"Such countries cannot be resistant to the crisis. In order to be resilient against crises and to produce policies against it, the financial system in any country should be strong. In this respect, the real economy should lead the credit flow and configuration of the financial system further within the real economy and research and development investments should play a central role. Countries that manage to build such structure have more advantage in terms of competition with other countries," Davutoğlu emphasized.

Davutoğlu said that after the 2008 economic crisis, the financial sector in Turkey was proven strong, has a high durability and that the budget discipline applied together with financial discipline protected the macro balances in the economy.

"However, as the government, what we value, examine and encourage the most is the revival of the real economy," the prime minister said, and asked for all investors and industrialists in the real economy to focus more on research and development activities and to offer the most famous brands in Turkey to global markets.

The percentage reserved for research and development activities within the GDP has been increased from 0.55 percent to 0.95 percent in the last 12 years; according to Davutoğlu, the government will aim to push this figure up to 3 percent by 2023 as well.

"We will provide all the support needed. While Turkey has come this far by using is gold potential, from now on, growth should be based on quality production, state-of-the-art technologies and high competitive power," Davutoğlu said.