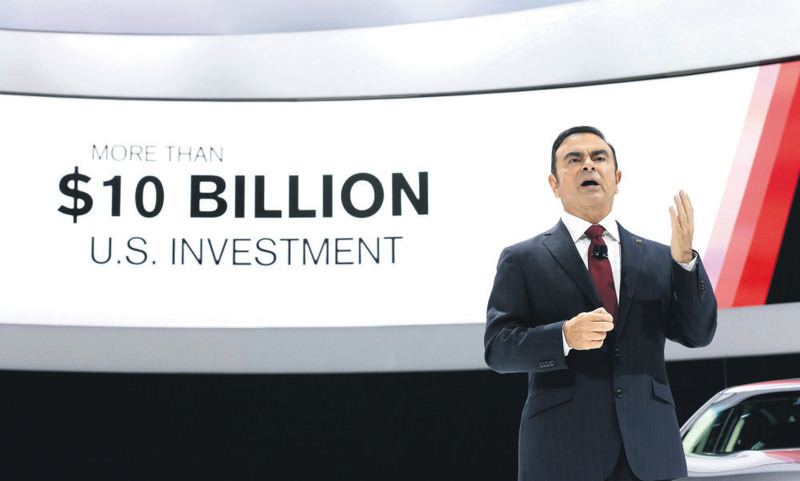 by French Press Agency - AFP Apr 04, 2015 12:00 am
The boss of Nissan wants to put self-driving cars on Japan's roads next year, and said they will be able to navigate busy urban environments on their own by 2020. Nissan CEO Carlos Ghosn said formidable technological and legal challenges remain but that the direction of travel was clear. "There will be a Nissan product in Japan that will include the ability to drive autonomously," he told reporters on Thursday at the New York International Auto Show. "Obviously when you have this kind of technology, you also want the Japanese market to enjoy it as soon as possible."

A five-year tie up with NASA on the technology would see the initial rollout by December 2016, with cars that can drive on highways without anyone at the wheel. In 2018, models should have the ability to avoid hazards and to change lanes, and by 2020, vehicles should be able to autonomously manoeuver through crowded city roads.

"It's going to happen step by step because we need to make sure that the regulators in the different countries feel comfortable," Ghosn said, according to Kyodo News. "To persuade the regulators that you can take your hands off the wheel or your eyes from the road is going to take a lot of demonstration," he added.

Nissan, Japan's second biggest automaker, is also looking at working with domestic rivals Toyota and Honda on the technology. Reports in February said the three are planning to team up with electronics giants and the government in a bid to propel the country into the front ranks of self-driving cars. The move is part of a government initiative to support domestic industries as competition in the field intensifies globally, with Google testing its own car and Apple also reported to be working on such a vehicle.

The Japanese government has set up a panel to look at the legal issues surrounding autonomous cars, which under current laws are not allowed on public roads. One of the key factors is that of who bears responsibility in the event of an accident when a car is driving itself. Advocates of self-driving cars say they could help reduce the number of crashes on the roads because they remove the potential for human error. More than 4,000 people die in traffic accidents in Japan every year.
Last Update: Apr 04, 2015 1:52 am
RELATED TOPICS