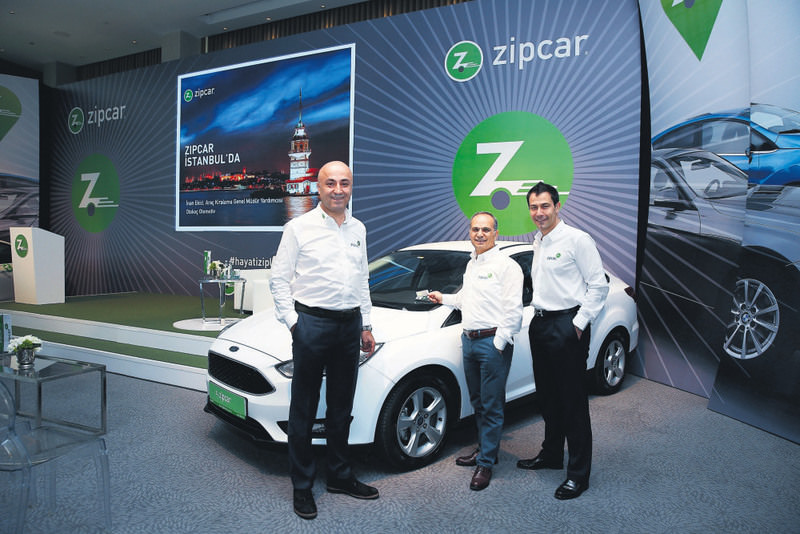 by Anadolu Agency Apr 04, 2015 12:00 am
Zipcar, a U.S.-based car rental company, has entered into the Turkish market in cooperation with a prominent auto firm to provide car sharing services to Istanbulites. Speaking at a press conference, Massimo Marsili, the firm's head of European operations, said Zipcar was excited to enter the Turkish market. "We are happy to contribute efforts to ease traffic congestion in Istanbul and to provide an alternative mode of transportation in the city," Marsili added. Founded in 2000, the company has recently increased its activities in European countries such as the U.K. and Spain. It offers an hourly car rental system. For a fixed fee, registered customers can pick up and drop off vehicles at designated locations in a city. Zipcar provides car insurance and gasoline. Zipcar entered the Turkish market with Otokoç Automotive, which has been providing a car rental service for 41 years. Görgün Özdemir, the chairman of Otokoç Automotive, said the service would ease city life and transportation. "There is no parking problem. Also, this system is budget- and environment-friendly," he added. Istanbul, Turkey's biggest city with a population of 15 million suffers from chronic traffic congestion. A newly released study by Dutch navigation firm, TomTom, shows that the city has the worst traffic congestion in Europe.

"The average 30-minute drive in the city will take over an hour during evening rush hour, leading to an extra 125 hours wasted stuck in traffic every year," the company said on Tuesday. Despite efforts to increase public transportation in the city, the congestion has increased due to a rise in car ownership. A car-sharing system can provide an alternative to ownership in efforts to ease traffic jam.

There are at least three major companies that provide car-sharing schemes in Istanbul such as YoYo, Mobicar and Mobilizm. YoYo is considered to boast the biggest share in the country's carpooling market.

İnan Ekici, a deputy of car rental department at Otokoç, said the company would provide car-sharing in 20 locations in the city and planned to increase this number to 50 by the end of this year. "In five years, we aim to raise this to 150 locations," Ekici said in a press conference. Ekici also said they were in talks with Istanbul Metropolitan Municipality to combine their car-sharing schemes with the city's transportation system.
Last Update: Apr 04, 2015 1:53 am
RELATED TOPICS