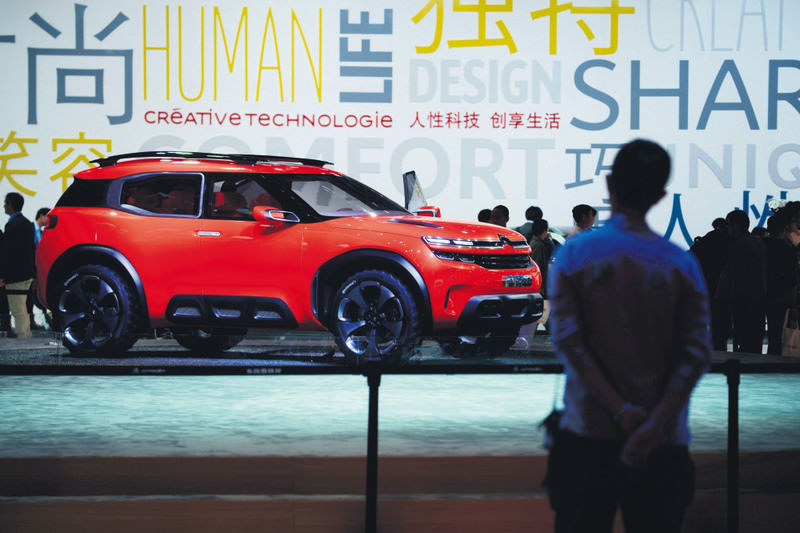 A man looks at a Citroen Aircross at the 16th Shanghai International Automobile Industry Exhibition in Shanghai. Chinese technology giants Alibaba and Tencent are promising to build the cars of the future.
by French Press Agency - AFP Apr 22, 2015 12:00 am

Chinese technology giants Alibaba and Tencent are promising to build the cars of the future: Vehicles linked seamlessly to the Internet that offer shopping and navigation help while on the road

E-commerce giant Alibaba and WeChat messaging app provider Tencent have both announced plans for cars in the past month, along with video streaming platform Letv. The move could shake up the traditional industry in the world's largest auto market, but details of their automotive visions are still vague, analysts said. At the Shanghai Auto Show this week, the stand of Letv's partner in the venture, BAIC Motor, displayed the concept for the vehicle, which has two front seats with a steering wheel and a futuristic screen control panel.

"In the mobile Internet era, the auto industry is facing a huge revolution," Letv CEO Jia Yueting said on his microblog. "The Chinese auto industry can subvert traditional European, American, Japanese and Korean giants." A promotional film at the auto show said the Letv car would have features such as gesture recognition, automatic parking and a fingerprint recognition locking device.

"At the moment, we haven't seen the products; this is all the sort of concept stage," Namrita Chow, principal analyst for IHS Automotive, told AFP. In the United States, Google has already made news with its plans for a "self-driving car," and Apple is reportedly planning to develop an electric car.

Alibaba, whose $25 billion U.S.-listing last year was the world's largest, plans an "Internet car" that would use technology to provide a better driving experience including e-commerce, digital entertainment, map and communications services. In one sense, Alibaba is already in the auto business. Its business-to-consumer platform Tmall.com is now offering more than 30 new cars - including a limited-edition Ford Mustang - launched at the Shanghai auto show, which started on Monday. Rival Tencent also has plans for an Internet-connected car, while Letv is planning an electric vehicle. China's market for fully electric vehicles and hybrids remains small, but the government is offering support to the emerging industry. Both Alibaba and Letv have chosen powerful state-owned firms as partners for their projects, an odd match for the nimble private companies. Alibaba is working with China's biggest auto maker, Shanghai-based SAIC Motor. "The Internet will become a must-have feature of future cars," SAIC chief engineer Jing Lei said in a statement announcing the cooperation. Last week, Alibaba also announced it had formed a strategic partnership with Shanghai General Motors - a joint venture of General Motors and SAIC Motor - for car finance, big data marketing, after-sales service and online-to-offline commerce. Letv's partner BAIC Motor is the listed unit of Beijing Automotive Group, which reports directly to the central government. "Production of the car will depend on demand," a BAIC Motor official told AFP, adding it could be on the market in as little as two years. Analysts said partnering with an established auto company allows technology players to develop a car with a conventional combustion engine, as electric vehicles are currently the only area open to companies outside the industry under government rules. Tencent has tapped less traditional partners, Apple supplier Foxconn of Taiwan and luxury car dealer China Harmony Auto, for its vehicle. "Cooperation is still at a very early stage," a Tencent spokeswoman told AFP.
Last Update: Apr 22, 2015 9:44 pm
RELATED TOPICS