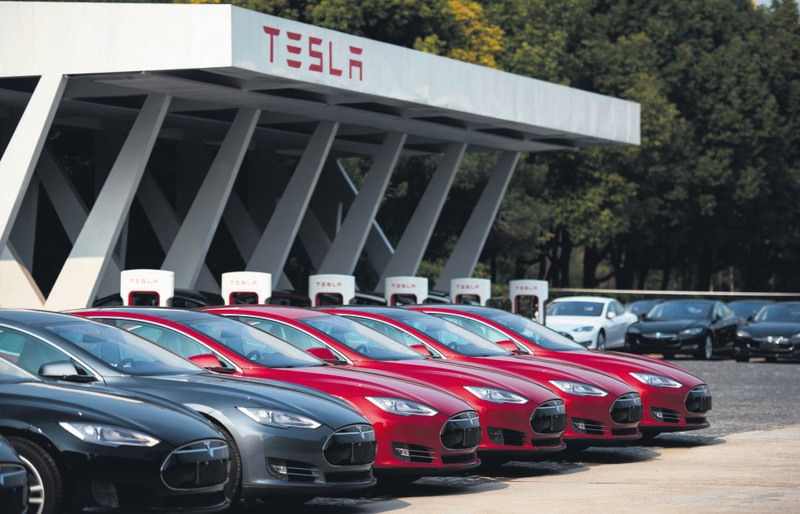 by Associated Press May 07, 2015 12:00 am
Electric car maker Tesla Motors delivered a quarterly record of 10,045 cars in the first quarter, helping it beat Wall Street's expectations despite costly investments in new products and factory capacity and the impact of the strong dollar. Tesla's net loss widened to $154 million. The loss, of $1.22 per share, compared to a loss of 40 cents per share in the January-March period a year ago. Tesla says unadjusted figures do not reflect its true performance because accounting rules limit how it records revenue for leases. On an adjusted basis, the company lost $45 million, or 36 cents per share, in the January-March period. That beat Wall Street's forecast of a 50 cent loss per share. Tesla said North American and European orders for the Model S sedan were up, but orders in China continued to lag expectations. Tesla said it remains confident it will sell 55,000 Model S sedans and Model X SUVs this year.

The company said it remains on track to deliver the Model X SUV by the end of the third quarter. Buyers should be able to start configuring their vehicles online in July, CEO Elon Musk said. Tesla is currently building prototypes of the Model X, and in the first quarter it invested in an expanded body shop and paint shop for the Model X at its Fremont, California, factory. Musk said production volume will likely double in the fourth quarter as Model X ramps up, but he acknowledged that plan is optimistic.

Musk said he hopes to reveal a prototype of its next vehicle, the Model 3 sedan, next March. The Model 3 which will cost around half the $70,000 starting price of a Model S will likely go on sale at the end of 2017.

On a conference call with analysts, most questions focused on Tesla's April 30 announcement that it will offer home and commercial battery packs that use solar energy to provide backup power. Production of the packs will begin soon at the Fremont factory.
Last Update: May 07, 2015 11:11 pm
RELATED TOPICS