Hyundai begins to production of its H350 series in Bursa 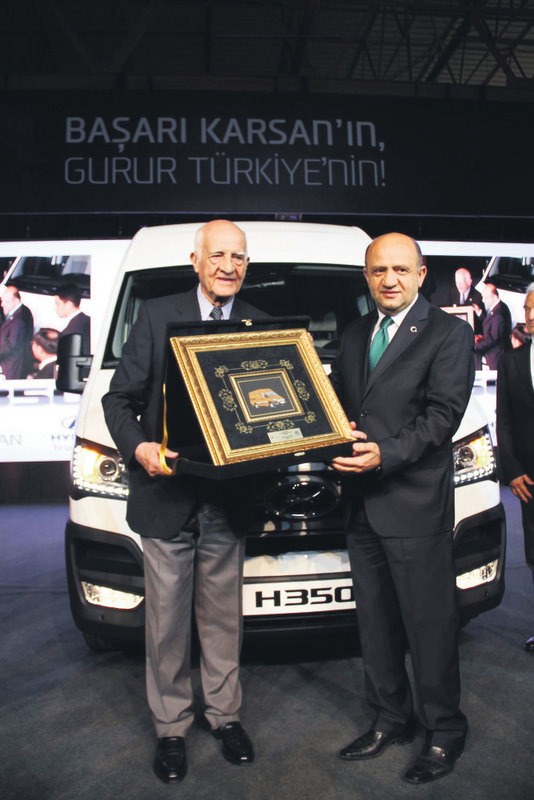 The fifth largest automobile producer in the world begam production of its H350 series in Turkey's Bursa with a ceremony attend by the Industry and Technology Minister, who said it is time for Turkey to launch its own brand

Science, Industry and Technology Minister Fikri Işık said that now it is the time for Turkey to focus more on a local car brand and that the ministry is striving to reach this aim.

The Start of Production Ceremony for the Hyundai brand H350 series vehicles manufactured by Karsan's business partner Hyundai Motor Company (HMC) was held at the Hasanağa Industrial Zone in Bursa.

Despite its short history, Hyundai is the fifth largest automobile producer in the world. Reminding that Işık said the new investment is proof of the company's confidence in the Turkish economy along with the abilities, power and skills of Karsan's personnel. According to the strategic partnerhip agreement signed between Turkey and South Korea, the two countries will work to increase investments and make investments together in third countries.

The automotive industry is still the biggest export sector in Turkey and has a trade surplus in the current accounts balance. The sector carries out $18 billion worth of exports and around $15 billion worth of imports. The imports of end products, rather than of parts, constitute a considerable part of overall automotive imports. Currently, Turkey imports 78 to 79 percent of its automobiles.

Underlining that the automotive sector is an indispensable industry for Turkey, Işık said that Turkey is indisputably the leading country in bus production in Europe. Turkey ranks second in the production of light and heavy commercial vehicles and automobiles in Europe, while it ranks sixth and 17th in Europe and the world respectively.

Pointing to Turkey's place in the global automotive world, Işık said Turkey should move up to a better position in Europe and secure the 10th position in the world in the automotive industry in order to achieve its goals for 2023. This is a strategic objective for us, Işık added.

Emphasizing that the automotive supply industry also has high export power and potential in the world and that in countries such as Turkey that do not have their local automobile brands, Işık said that the automotive sector in Turkey can only be a supplier. Countries that have their local brands also have to consider the supply industry when taking decisions as these industries are strategic partners.

Today, especially in Bursa, Kocaeli and Istanbul, export goods to global brands in Turkey and the sector might be facing trouble in the future if Turkey loses its competitive advantage in terms of prices.

The minister pointed out that in order for Turkey to be considered as strategic partner in the global automotive industry, it has to produce its own brand. He also said that the first phase of the project to ensure this is about to be finalized and will be announced soon and, when entering into the second phase, they will benefit from Karsan's expertise and experience and work together on creating a local Turkish brand, which is a strategic step for Turkey to become a global power in the industry.

As Turkey is currently only a consumer of technology, it has had to focus more on R&D and innovation to become a manufacturer. In this respect, while there were two technology development areas in 2002, now there are 44, with production worth TL 23 billion ($8.8 billion) and exports exceeding TL 2 billion. Further, there are 181 R&D centers in Turkey currently and now Turkey is evolving into a country that also produces knowledge, information and issuing licenses instead of just obtaining and using the information and licenses. During the global crisis, Turkey made a step to highly supported R&D centers and now another draft bill has been submitted to Parliament for supporting design offices along with R&D centers.
Last Update: May 14, 2015 11:04 pm
RELATED TOPICS