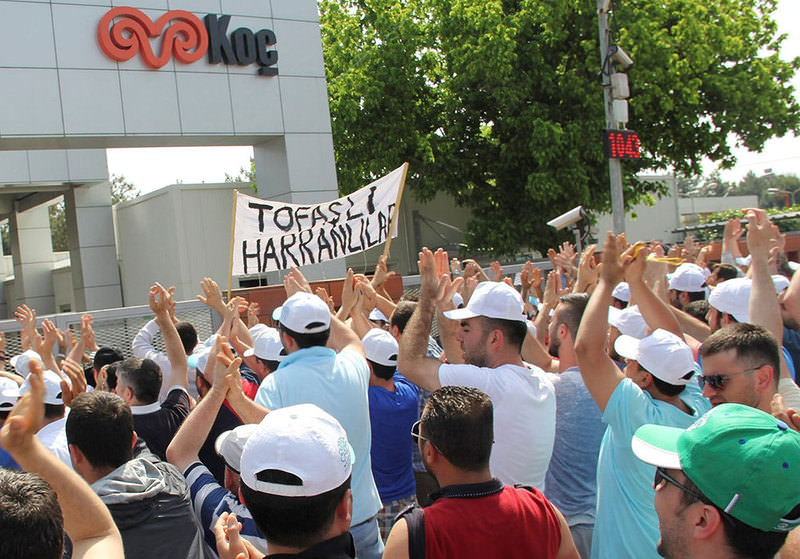 by Sinan Öztürk May 18, 2015 12:00 am
As the strike at Turkey's two largest automotive factories, Renault and Tofaş (Turkish Automotive Plants) - located in the northern province of Bursa - continued into its sixth day, more plants from the automotive sector have joined the strike.

Workers from four car parts plants located in Bursa, Turkish Mako and Ototrim, French Valeo and U.K.-based Delphi, have also announced that they will join the strike today and Wednesday. The number of workers on strike has now exceeded 15,000.

According to the list of the top 1,000 exporters of 2014 announced by the Turkish Exporters' Assembly on Monday, Oyak Renault is in third place while Tofaş is seventh.

Tofaş shares (TOASO), which are being traded on the Borsa Istanbul, started the week with a 4.42 percent decrease, while the price per share fell from TL 18.50 ($7.17) to TL 17.90. The company sent a notice to the Public Disclosure Platform (KAP), which announced, "Labor actions that have occurred in a couple of companies operating in the automotive sector in Bursa have affected some workers in our factory. Therefore, in accordance with the risk management policies of our corporation, to ensure the continuity of effective and healthy manufacturing activities of the factory and as a precautionary measure, the company management has decided to discontinue production until dissolution."

The strike started when more than 2,500 workers at a factory run by French carmaker Renault went on strike over wage differences and benefits on Thursday. The main reason was the difference in wages among Renault and Bosch car parts plant workers, both of whom are being represented by the same trade union, the Turkish Metal Union. They were later joined by workers from Tofaş, a joint venture of Turkey's top industrial conglomerate Koç Holding and FIAT, and workers from the Turkish car parts company Coşkunöz.

The Renault plant in Bursa is the largest plant of the French carmaker outside Western Europe and has an annual production capacity of 360,000 vehicles, mainly the Clio, Megane HB and Fluence models, as well as 400,000 engines. The company is one of the three-largest players in the Turkish automotive market.

Turkish Metal Union Chairman Pevrul Kavlak called on workers to end the strike, adding that employers now have the right to lay off the workers without compensation. The Confederation of Turkish Trade Unions (Türk-İş) affiliated union is being targeted by workers on strike, and is reported to have lost 10,000 workers since the strike started.

The Confederation of Revolutionary Trade Unions (DİSK)-affiliated United Metal Union General Secretary Selçuk Göktaş criticized Kavlak's words, holding them up as proof of Turkish Metal's collaboration with employers. Göktaş added that committees of workers on strike should be brought together with employers by the Labor Ministry.
Last Update: May 18, 2015 11:25 pm
RELATED TOPICS