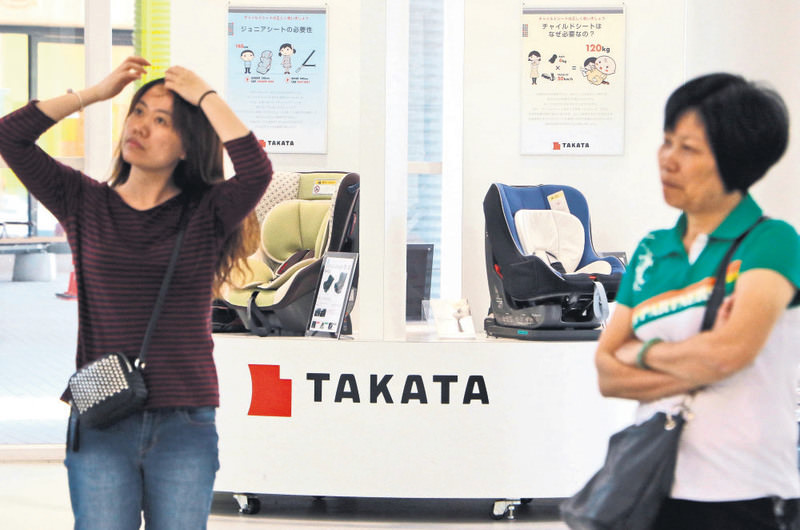 Japanese auto parts maker Takata's child car seats are displayed at a showroom in Tokyo yesterday. Takata is doubling a recall of US cars with potentially deadly airbags to a record nearly 34 million vehicles.
by May 20, 2015 12:00 am

After six deaths and scores of injuries in vehicles produced by automakers including Honda, Toyota, General Motors and BMW, Japanese auto parts giant Takata is recalling 34 million vehicles because of its defected airbags

Japanese auto parts giant Takata has acknowledged a potentially deadly defect in its airbags for the first time as it agreed to double a U.S. recall to a record nearly 34 million vehicles, officials said, pushing its shares into a steep dive yesterday.

The defect in the airbag's inflator has been linked to as many as six deaths and scores of injuries in vehicles made by almost a dozen automakers including Honda, Toyota, General Motors and BMW.

U.S. Secretary of Transportation Anthony Foxx announced the recall - the biggest in U.S. history - after Takata and its U.S. subsidiary agreed in a consent order with the National Highway Traffic Safety Administration (NHTSA) that the flaw raised safety issues. "The Department of Transportation is taking the proactive steps necessary to ensure that defective inflators are replaced with safe ones as quickly as possible and that the highest risks are addressed first," Foxx said. "We will not stop our work until every airbag is replaced." But officials said it could take years to get enough replacement airbag inflators for all affected cars.

The defect, thought to be linked to a chemical propellant that helps inflate the airbags, can cause them to deploy with explosive force, sending metal shrapnel hurtling toward drivers and passengers.

The announcement does not include millions of other vehicles recalled outside the U.S. for the same problem. Last week, Japan's top three automakers - Toyota, Nissan and Honda - expanded their recalls in the U.S. and elsewhere as the crisis continues to grow. But "from what Takata announced overnight, we don't think the latest U.S. recalls will lead to additional recalls here in Japan," a Japanese Ministry of Transport official said.

A Takata spokesman yesterday said he could not supply a global recall tally, adding that the firm, one of the world's biggest airbag suppliers, was discussing the figure with its automaker clients. The firm is facing calls for a criminal probe and was accused in a U.S. class-action lawsuit of "deception and obfuscation" over the defect. Its biggest airbag client, Honda, has been named in the claim that alleges the pair conspired to hide the flaw for years.

The embattled company's Tokyo-listed shares nosedived 10.2 percent by the close. It has lost more than half its value since the start of last year. "Reacting to the bad news, investors are saying to themselves 'again?!'," said Nobuyuki Fujimoto, senior market analyst at SBI securities.

Mark Rosekind, head of the NHTSA, said that "our goal has been simple: a safe air bag in every vehicle." He added "The steps we're taking today represent significant progress toward that goal."

Takata issued four separate defect reports to the agency, one dealing with driver-side airbags and three with passenger-side units. The problem could lead to "over-aggressive combustion" that could cause the body of the inflator to rupture, it said. In that event, "metal fragments could pass through the airbag cushion material, which may result in injury or death to vehicle occupants." The issue came to the forefront last year with congressional hearings in which Takata executives appeared evasive and uncooperative.

The NHTSA began fining the company $14,000 a day in February this year to pressure it to supply documentation on internal probes into airbag issues dating back more than a decade. Rosekind said the accumulated penalties have topped $1 million, but the daily fine has been suspended since Takata "stepped up" to cooperate with investigators.

The company could still face more civil and criminal fines from various government agencies, depending on the results of ongoing investigations and its cooperation with investigators, according to the consent order.

A number of class-action lawsuits could also lead to substantial damage payments.

However, the root cause of the inflator explosions remains in question. Investigators know that hot, humid weather is prone to causing the problem, but that does not explain all the incidents. And the supply of replacement inflators is small, which will delay repairs. "This is, over the long haul, going to be very involved and complex," Rosekind said. "It could be some years."
Last Update: May 20, 2015 10:15 pm
RELATED TOPICS