Ford Otosan halts production due to autoworkers' strike in Bursa 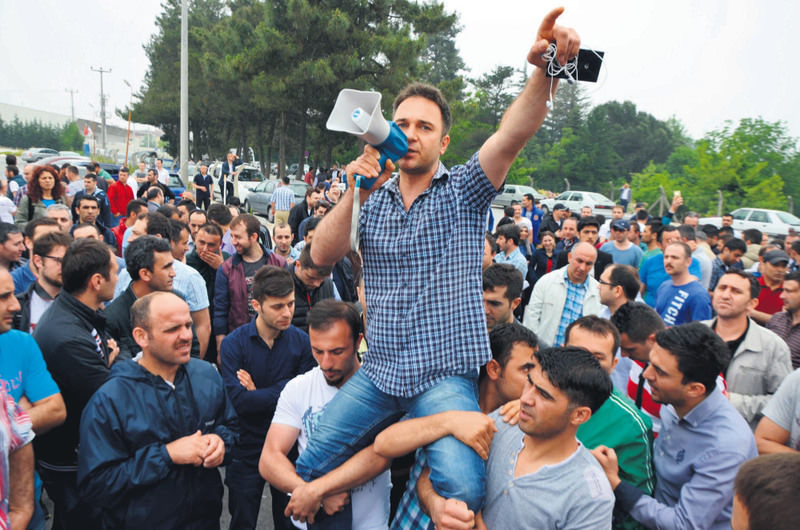 After the top three automotive producers halted production, Turkey's second largest exporter stopped production due to lack of spare parts. Deputy PM Babacan said the timing is remarkable ahead of the elections

The ongoing strike in Turkey's automotive base, the northwestern city of Bursa, yesterday affected two plants of Turkey's second-largest exporter and largest automotive producer, Ford Otosan. Ford Otosan, a joint venture of Turkey's largest industrial conglomerate, Koç Holding, and U.S.-based automotive giant Ford, said in a statement submitted to the Public Disclosure Platform (KAP) that vehicle production would stop because parts coming from supplier companies located in Bursa have halted due to strikes, making production impossible in the Gölcük and Yeniköy plants.

Now with Ford halting production, Turkey's top three automotive producers have ceased production along with various spare parts producers. Since Thursday, workers have been on strike at the Turkish Military Pension Fund (Oyak) Renault plant, later joined by another of Koç Holding's joint ventures, Turkish Automotive Plants (Tofaş), which produces Fiat-licensed vehicles. Renault is Turkey's third-largest exporter while Tofaş is the seventh-largest. The three companies had $9.3 billion in combined exports in 2013.

The workers of automobile supplier factories Coşkunöz, Mako, Ototrim, Valeo and Delphi, all located in Bursa, have also joined the strike.

Ford's decision was reported as a preemptive move as its workers are also on the verge of a strike. Around 500 workers gathered in front of the Gölcük plant on Wednesday, voiced their demands and expressed their support for the workers on strike. The Turkish Metal Union, the trade union that is being targeted by the striking workers for applying different working conditions and wages, was again the target.

Ford Otosan has operated in Turkey since 1977 and currently has around 7,500 employees.

Deputy prime minister in charge of the economy, Ali Babacan, said the timing of the expanding strikes is remarkable because the country is gearing up for the general elections on June 7. In an interview with Habertürk and Bloomberg HT TV stations, Babacan said: "When these issues come to the fore suddenly with no reason, two-to-three weeks ahead of the elections, naturally it raises doubts." He added that there were similar situations in other sectors but they have not been covered as broadly by the media as the autoworkers' strikes have been. "We do our part and the prime minister is closely involved with these issues," he said. Babacan also admitted that there are issues that require reform in the labor market, stressing the need for a labor market cleansed of ideologies.

The demands of the workers have concentrated on the areas of equal wages for equal jobs, wage increases and direct representation of worker committees instead of the Turkish Metal Union, which has been accused of collaborating with employers.

The Turkish Metal Union defended itself in a statement released on Wednesday, saying the average wages of Bosch car parts plant workers are below the average of Renault and Tofaş workers. Renault workers had started their strike citingthat some of Bosch's workers earn up to TL 300 ($116.13) more than their monthly wages. In response, the Turkish Metal Union said this is the case for only a limited number of Bosch workers.

The Turkish Employers' Association of Metal Industries (MESS) said the "illegal" strikes have reached an "unbearable magnitude" as the strikes are negatively affecting the Turkish automotive sector's reputation and competitive power and their continuation will lead to order cancelations and market losses. The automotive sector has been one of the driving sectors in Turkey's growth over the last 10 years. According to the Paris-based International Organisation of Motor Vehicle Manufacturers (OICA), Turkey produced 1.17 million cars and commercial vehicles in 2014, up from 346,565 in 2002.
Last Update: May 20, 2015 10:26 pm
RELATED TOPICS